Posted on February 19, 2012 by kissmybroccoli

So, it seems after taking January off, I seem to be on some sort of pancake making spree! Just when I think I’ve run out of flavor combinations or ingredients to stuff inside, I dream up something new!

Now, I’ll go ahead and tell you that without even looking, I KNOW I’m not the first person to come up with the idea of cinnamon roll pancakes…or even PUMPKIN cinnamon roll pancakes, buuuuuuuut here is my series of thoughts whenever I see those recipes and their drool-worthy pictures with perfect cinnamon swirlies and the creamy white icing that looks so good I want to lick my computer screen:

So I just thought I’d try whipping up a recipe that still has all the same wonderful flavors but with less of the butter and sugar…you know, because I want to enjoy a plate of pancakes without going into a diabetic coma 😉

So this is what I came up with:

1. Heat a large skillet or electric griddle to medium heat and coat with butter or cooking spray.

3. Pour 1 cup of milk into a measuring cup, add apple cider vinegar and set aside for 1-2 minutes. This is your “buttermilk”

7. Scoop batter into/onto skillet/griddle by 1/3 cup, swirl with cinnamon sauce and allow to cook 4-5 minutes or until edges start to brown.

8. Flip and allow to cook for 4-5 minutes more or until done.

9. Transfer to plate and top with cashew cream “icing” (recipe to follow) and sprinkle with more cinnamon.

And don’t even try to tell me it’s not pumpkin season…my pantry filled with 12 more cans of the stuff begs to differ! 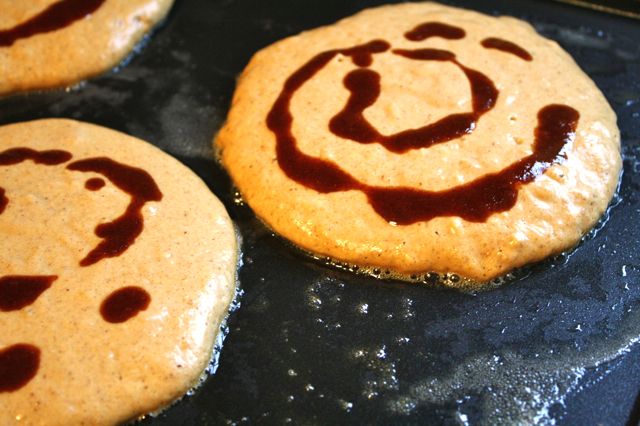 I need a bit more practice in my cinnamon “swirling”…guess I’ll just have to make these again sometime soon. 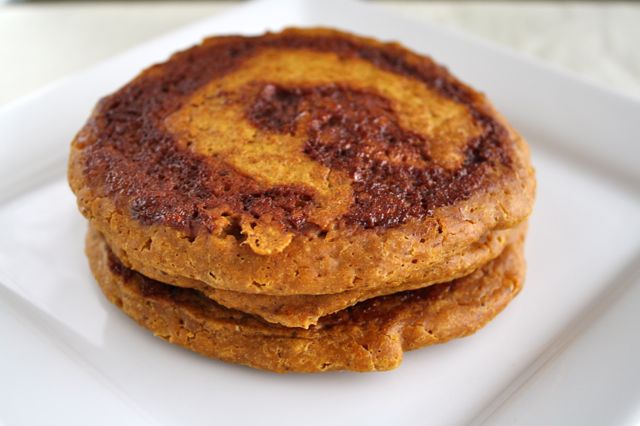 Flipped and plated and waiting for their icing bath! 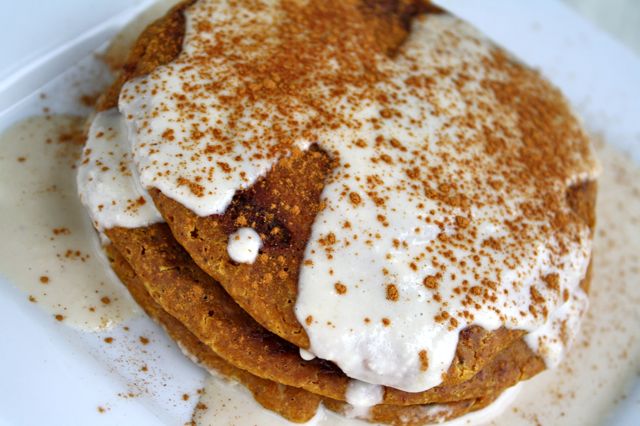 Oh yeah, THERE it is!

I know, I know…I’m totally wishing I could be that pancake right now too!

The cakes came out so moi….um, yeah…you know what I mean and the cinnamon swirl added just the right amount of sweetness…I totally could have eaten them plain, but once I got a taste of this icing, there wasn’t a doubt in my mind that they were getting  drizzled with some!

Combine all ingredients in a mini food processor or Magic Bullet and blend until smooth and creamy.

Now you guys know I stand firm on my belief that you should go with the “real” stuff when it comes to syrup (the fake sugars will only leave your body wanting more), but I accidentally picked up this “table syrup” the other day instead but didn’t notice until I cracked it open this morning… 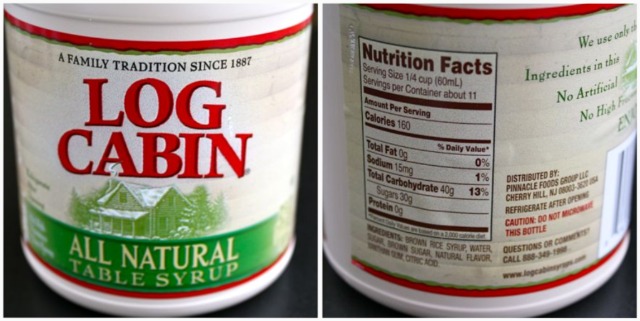 Turns out, it’s made from brown rice syrup, it’s pretty flippin’ tasty, AND has about 22-23 grams less sugar!

I hope you are all having a great weekend! Now that BB has done finished all the dishes, cleaned the kitchen, and waited patiently for me to get this post up (how lucky am I?), it’s time to get ready and head to his family’s house for his niece’s birthday celebration!

What are you guys up to today?

What seasonal flavor can you just not give up lately?