Posted on February 13, 2013 by kissmybroccoli

You KNOW what time it is…

Sorry, I always get a little excited on Wednesdays! But who could blame me? Thanks to Jenn, we have a WHOLE day dedicated to linking up and drooling over foodporn!

Foodporn: (noun). The sight or mere description of food that instantly rouses the appetite, regardless of the time since one’s last meal, causing immense salivation, longing, and a desire to eat.

So be sure to head on over to Peas & Crayons and “excite yourself” a bit on this “hump” of a day…and if that’s not enough, I’m sure my guest post from yesterday is enough to get you fanning yourself!

Now, who’s ready to get hot and hungry? 😉

Believe it or not, after our MORE than decadent dinner at The Spence, the man-friend and I woke up the next morning STARVING! Luckily, our hotel was right around the corner from a little diner called The Majestic and as much as everyone touted it as
“drunk food,” I have to say, I was pretty impressed with my breakfast… 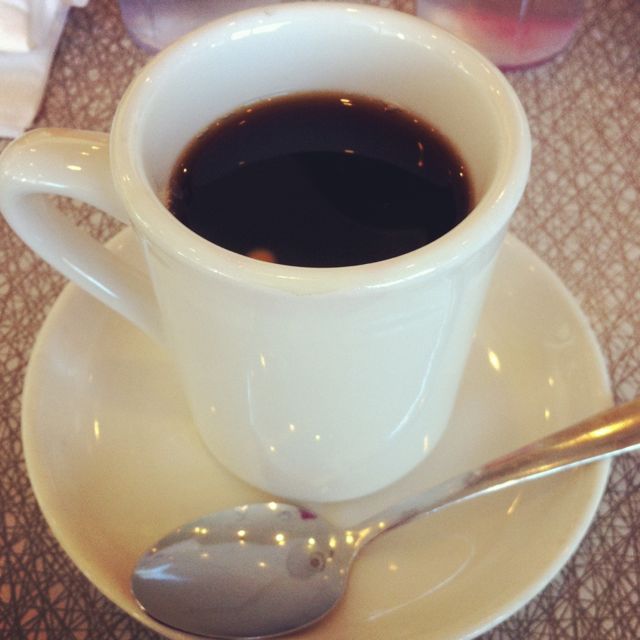 I sipped on some hot (always decaf) coffee while I waited for my order. 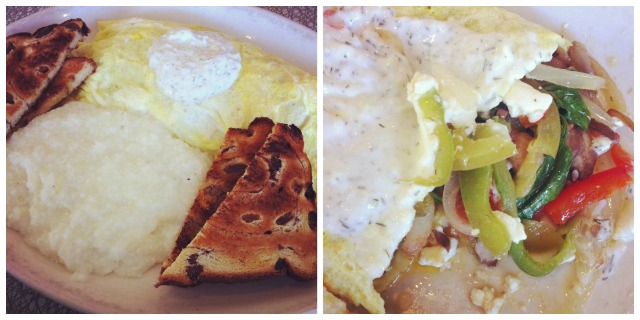 The Olympic Omelette with spinach, mushrooms, tomato, peppers, onion, feta and topped off with some of the BEST tzaziki sauce I’ve ever had!

I had a few bites of the grits (definitely been a WHILE since I’ve had those), but the toast went pretty much untouched since this was one mammoth of an omelette! The man-friend tore into a plate of pancakes and sausage before I was able to snap a picture, but since his plate was practically spotless afterward, I think it’s safe to say he enjoyed it! 😉

After breakfast, we met up with a friend of the man-friend and headed off to the Buford’s Farmers Market! And well, since I can NEVER say no to free samples… 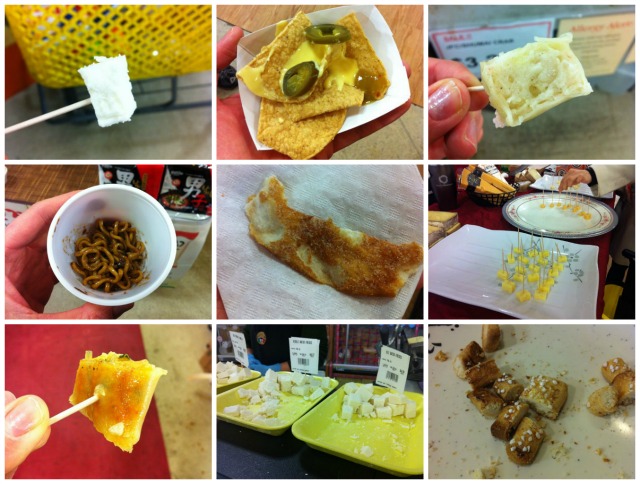 Obviously since Buford had just taken care of MY lunch, I wasn’t really feeling hungry, but since the boys practiced a bit more restraint the face of the freebies, after we checked out, we headed down the road to one of our friend’s favorite Asian restaurants, Bo Bo Garden. 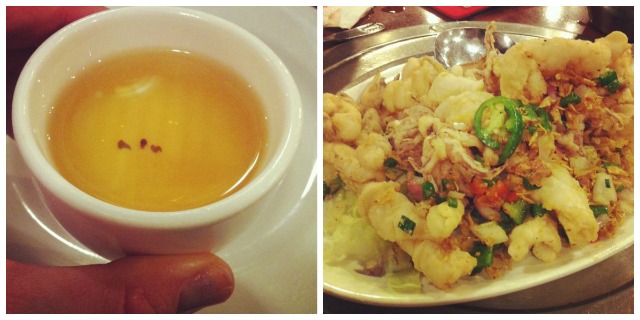 I sipped on some jasmine tea and took a few bites of the fried calamari appetizer that the boys ordered. It was some of the best I’ve had…then pieces of squid were HUGE and not greasy at all! 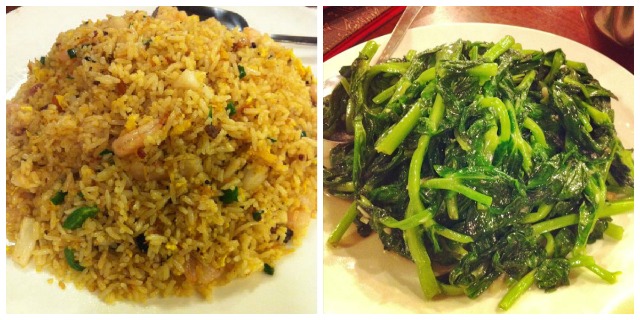 After that, the boys demolished a plate of shrimp fried rice (well, almost…the plate was seriously twice the size of my head!) and we all shared the sautéed Asian greens which were AMAZING!

After that, the man-friend and I headed back to the hotel for some much-needed chill time…there may or may not have been a two-hour nap involved! 😉

And then…it was time for MORE FOOD?!!?

We met up with Laura and a friend of hers for dinner at a place called Seven Lamps. Knowing it would be too hard to choose from all the delicious selections, we went with a variety of tapas again… 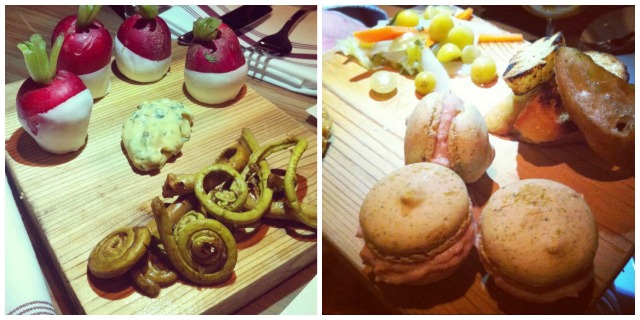 I tried one of the pickled ramps and thought it was pretty tasty, but radishes are one of the ONLY vegetables I don’t like and the thought of eating them with cold butter? Yeah, not really my thing.

BUT let me tell you about those macaroons!

Ever taste something that IMMEDIATELY takes you back to your childhood where you get all nostalgic and sappy and stuff? Yeah, that’s what happened with these babies…this is going to sound SO weird, but the mousse tasted straight up like mashed Vienna sausages! And paired with the sweet macaroon (my FIRST ever!), it was almost like eating a sweet bologna sandwich! It was so mind-blowing that I was just sitting there like a goof trying to figure it all out! Lol 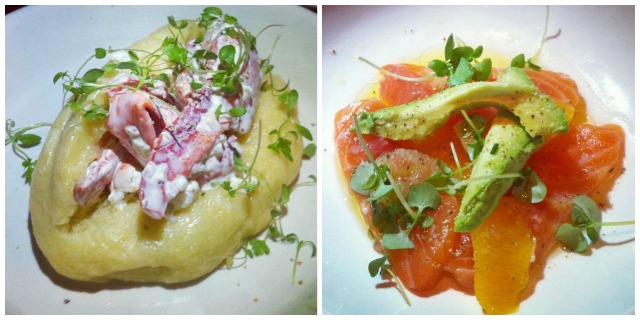 These two dishes were everyone’s least favorite of the night. While I LOVED the celery aioli and the soft spongy texture of the steamed bun, the lobster seemed to be missing something and the “smoked” salmon sashimi didn’t taste smoked at all.

Luckily, our next round of plates made up for the disappointment…

The beets were not only my FAVORITE of the night, but my favorite dish from the ENTIRE weekend! The sweet/salty/smokey/cheesy flavor had me on my KNEES! I swear I could eat a plate of this every single day for the rest of my life!

The fries were REALLY good…amazingly spiced and SERIOUSLY addicting. 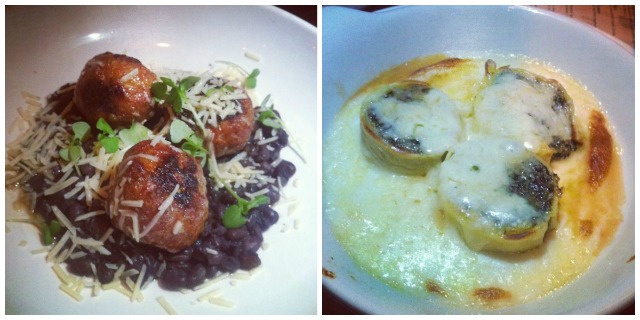 Spicy lamb meatballs with cranberry beans and parmesan and savory crepes with filled with wood-grilled kale and Vidalia onion, and SMOTHERED in Gruyère gratin

The meatballs had a good flavor but weren’t as spicy as I expected but the crepes were fantastic…and those cottage fries may or may not have been used to clean every last bit of that melty Gruyère off the plate!

Instead of sharing in our last two plates, the boys ordered a secret, off-the-menu selection… 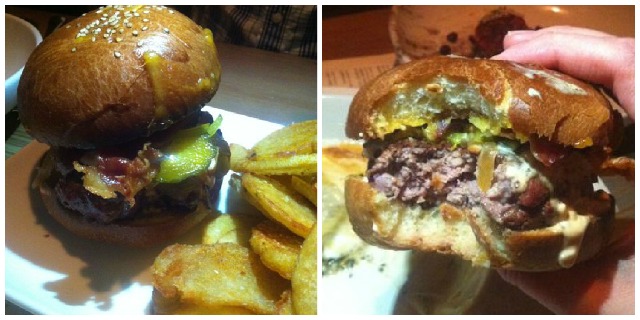 A 50/50 burger made from brisket and top round, and topped with house-made thousand island, caramelized onions, bread-and-butter pickles, and a grilled cheese gratin

I had a small bite of the burger and thought the flavors were great, but to be honest, I was totally tapa-ing 😉 out at this point and I kinda felt like this! 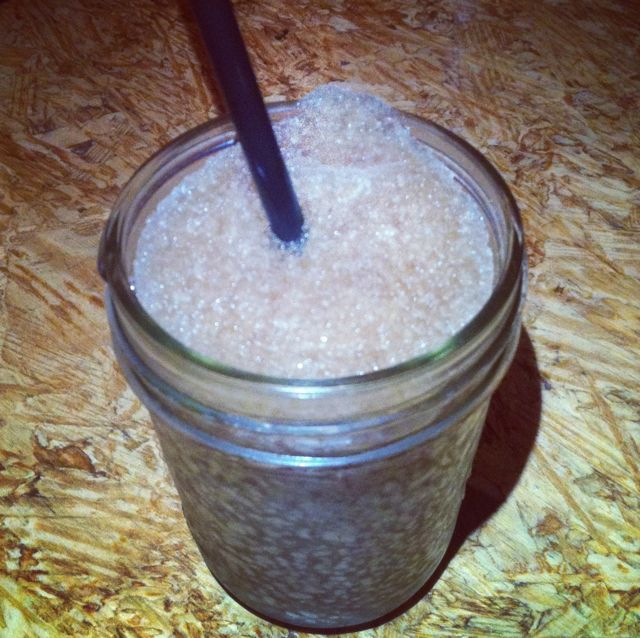 Needless to say, the next day’s meals were pretty slim and definitely involved a lot of green. It’s always nice to let loose while on vacation but it felt SO good to get back on track! 😉

Have you ever tried a macaroon? If so, what’s your favorite flavor?

48 Responses to WIAW: The Best of Atlanta (Part Two)