WIAW: Why I Could Never Be Vegan

Posted on February 19, 2014 by kissmybroccoli

Monday afternoon, I awoke MUCH too early for my liking, but decided to just roll with it, quite literally as I used a bit of gravity to pull myself out of bed, threw on some workout clothes, and carried my tired arse to the gym. 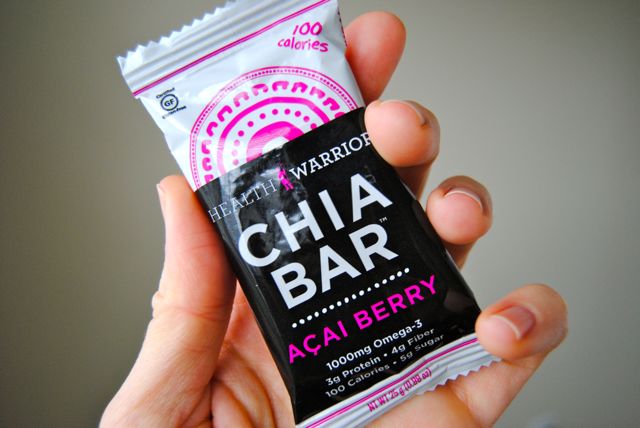 Feeling a bit hungry on my way out, I grabbed what has recently become my favorite preworkout snack. I found these babies at TJ Maxx a couple of months ago and I am in LOVE! But don’t let the first little bite of the day fool you, things are about to get “meatier”! #twss 😉

While at the gym, busting out a killer bi’s and tri’s workout (*brushes fingertips across chest*), I ended up drinking a liter (33oz) of water from my Camelbak bottle. I had actually planned on staying to do a little more cardio after my circuit, but decided food sounded better than the treadmill. Ha! 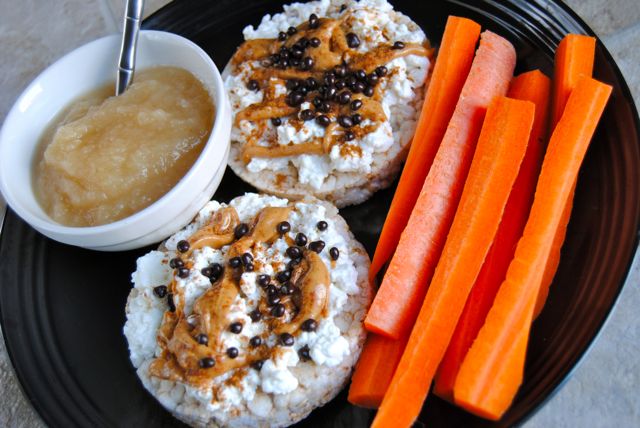 And what better (or faster) way to get food in your face than with a snack plate! Two honey nut rice cakes topped with cottage cheese, peanut butter, cinnamon, and chocolate-covered popped amaranth, one friggin HUGE carrot cut into strips, and a bowl of unsweetened applesauce. 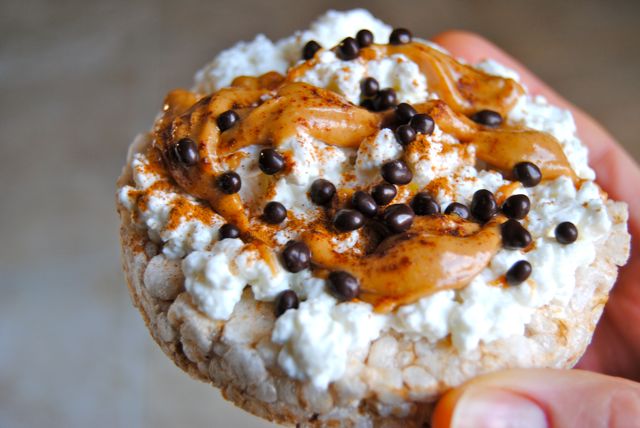 I cleaned my plate, save for one rice cake which I ended up eating after I finished getting ready for work and enjoyed with a cup of (unpictured) half-caff coffee.

I consider myself pretty lucky that even with my unpredictable lactose intolerance, I can still enjoy cottage cheese. After having a few episodes of lying in the fetal position after trips out for froyo, I’ve actually given up on dairy-containing frozen treats, but hey, at least I can still make my favorite protein ice cream! 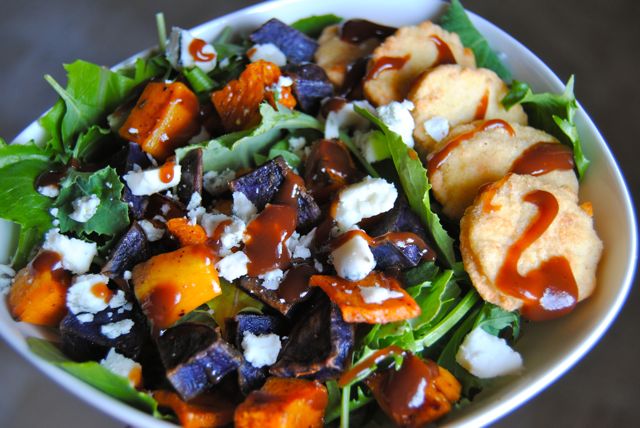 I’m not a big meat-eater, but whenever I get a craving for it, it’s almost always chicken. Baked or fried, skin-on or skin-off, tits or thighs, there’s really no way I won’t eat it…well, except for livers…yeah, Mom? You can KEEP those! And I think it goes without saying that I have no control in the face of life-altering cheese buying decisions! 😉 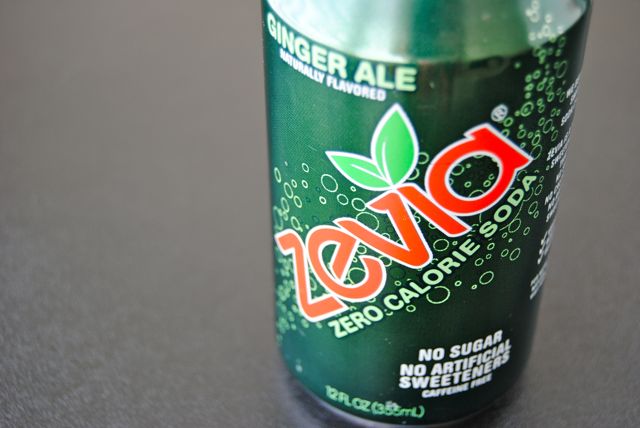 All washed down with one of my favorite Zevias! 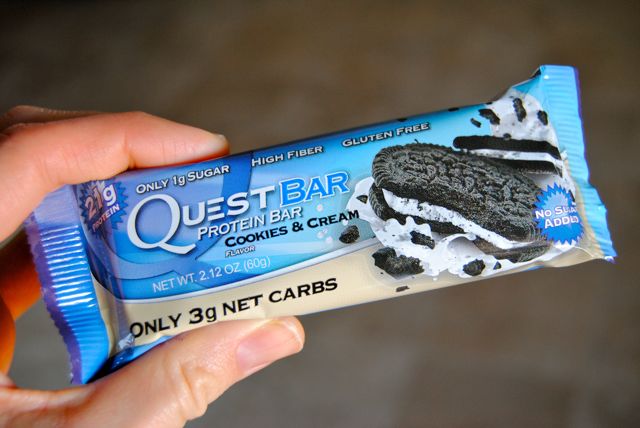 A handful of hours later, it was snack time…enter my latest Quest bar love and another liter (33oz) of water…followed by an hour of content tummy/sleepy head-bobbing.

My one true pre-packaged love. I’ve tried a LOT of bars in my day, and while I hate that sometimes they are a bit inconsistent in flavor and/or texture, I still have to say Quest is the best I’ve ever had! 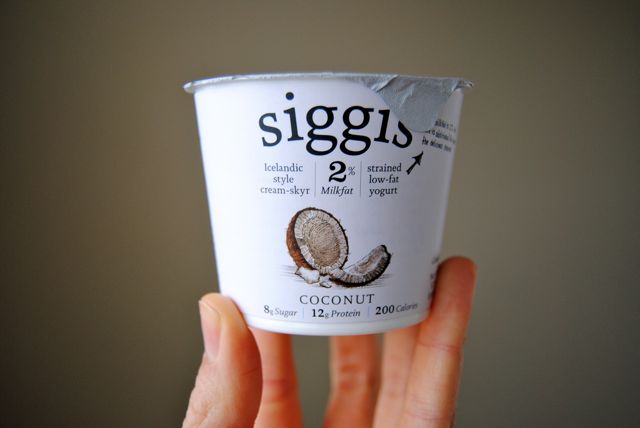 A couple of hours after that I felt snacky again, but knowing I was probably just feeling the lack of sleep and needed energy, I decided to keep it small with half a container of Siggi’s yogurt and saved the rest for the next day.

Just like cottage cheese, Greek (and other strained) yogurts are my saving grace. Hard to think what this world would be like without fluffy yogurt-filled pancakes or chocolate “icing”…and seriously, what ELSE would I use as a dip for my roasted kabocha? 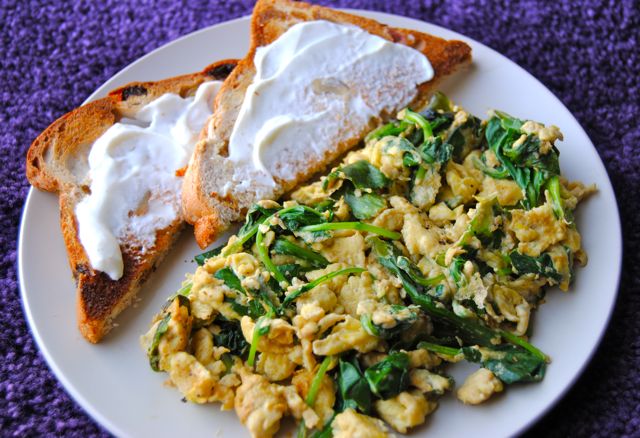 Once I FINALLY finished my shift and made it home, I scrambled up a super fast meal minutes before Benedryl-dosing and faceplanting. One egg + 2 egg whites + mixed baby greens with a side of ALL THE THINGS bread topped with quark.

I’ll admit that most bread and other vegan baked goods I’ve had in the past have been pretty tasty, but, in my opinion, NOTHING compares to the light fluffability of an egg-filled treat! And you guys KNOW this #yolkpimp could never live without her eggs!

While this list certainly isn’t all-inclusive…I mean, we didn’t even get INTO my love of ceviche, pizza, and pancakes…I do think it paints the proper picture to prove my point. BAM, bonus points for unintentional alliteration! 😉 Everyone has reasons behind their dietary preferences and well, these are mine. Just don’t think that after last week’s pancake rant and now this post, that I’m calling all vegans to be burned at the stake or anything! 😆

Now head on over to Peas and Crayons and see what tasty dishes (vegan or not) everyone is linking up this week because no matter what your preferences, today is the day we celebrate what we ALL have in common…FOOD!

65 Responses to WIAW: Why I Could Never Be Vegan