Congratulations, you’ve made it to Friday!

Come…join me, the weekend is fine! 😀

So yesterday, I kinda left you guys with a bit of a doozy, didn’t I? After taking a look at my photo library for the last couple of weeks, I noticed I haven’t taken many food pictures lately…and the ones I have taken, I’ve only shared on Instagram. Since I have a bad habit of forgetting that not EVERYONE has access to the best app ever created, I figured today would be a good day for all you squares to catch up on the latest and greatest! 😉 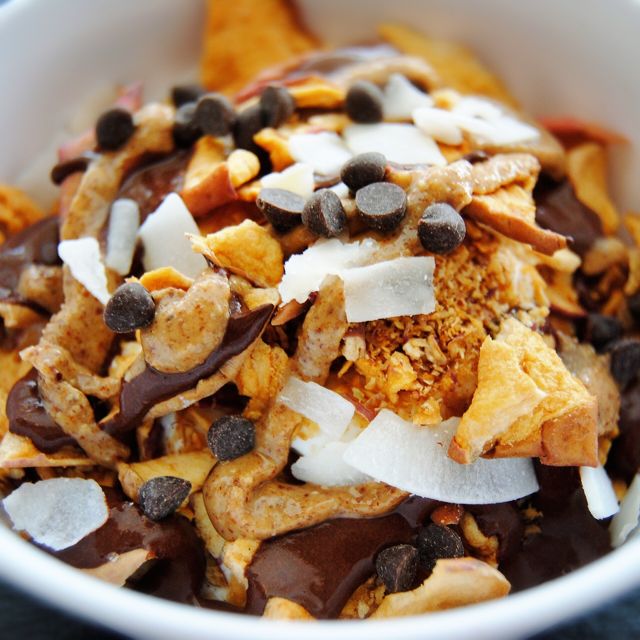 Yesterday’s tease was a  breakfast of plain Greek yogurt (it’s under there…somewhere) topped with cinnamon apple chips (which I’m now out of and cursing Amanda for ever having turned me on to them!), coconut chips, CHOCOLATE chips, maple almond butter, and the star of the show…chai-spiked cocoa sauce! All I did was mix this chai latte powder with cocoa powder and a bit of water! Bam! 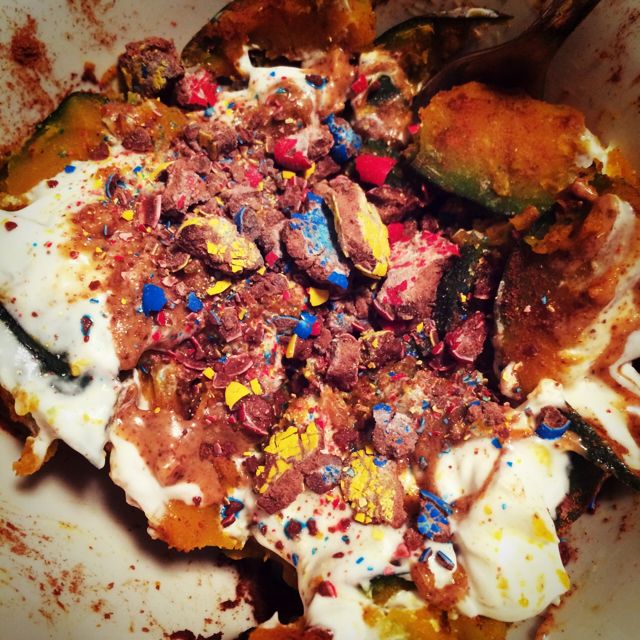 Keeping up with the dessert-y (yep, totally making that a word) meals, this bad boy was dinner a couple of weeks ago…steamed kabocha (because I was too impatient to roast it) topped with Greek yogurt, cinnamon, almond butter, annnnnnnnd CAKE BATTER FRICKIN’ M&M’S!!! Oh yes, I went there…and I died…and then I came back to life, took another bite and died again. I am now typing this post from an alternate universe. Wrap your mind around THAT, folks! 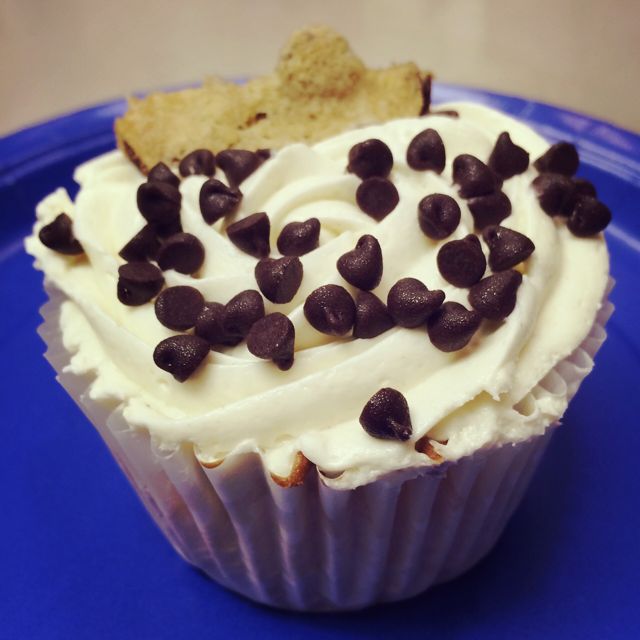 When I haven’t been using all my energy to resuscitate myself, I’ve been having a full on love affair with my boss…I MEAN WITH HER BAKED GOODS! 😉 Man oh man, you guys, this woman can make a MEAN cupcake…dense yet fluffy cake topped with sweet buttercream icing and chocolate chips with a surprise inside… 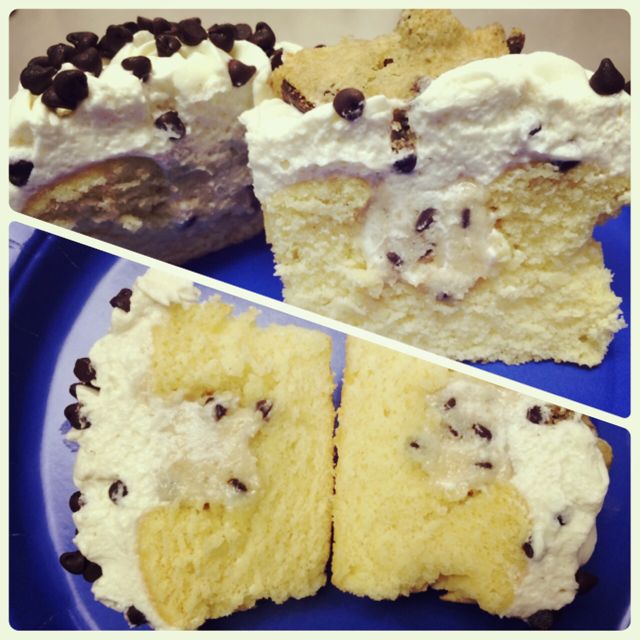 For the love of all things HOLY, what’s a girl gotta do to get another one of these?! Oh yes, that is most DEFINITELY a lump of creamy, gooey, irresistible COOKIE DOUGH inside that innocent looking cupcake! Seriously…I had a moment…a When Harry Met Sally moment that is! 😉 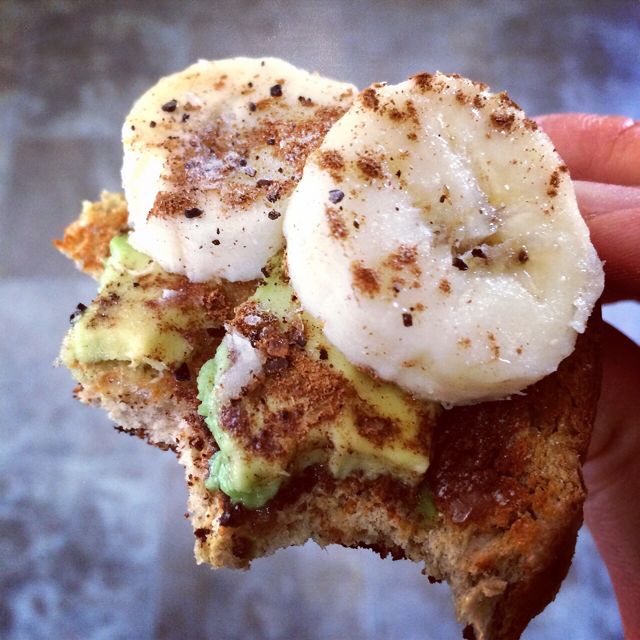 There’s also been some #strangebutgood action going on…because you guys know I can’t go long without a good dose of weirdness. I’ve introduced you to the avocado/banana combo before, baaaa-UT? Slap that shit on some toast and sprinkle on some Trader Joe’s cocoa coffee grinder (if you have some that you’ve been hoarding for two years like me) and cinnamon and you’ve got yourself a winner ! 😉 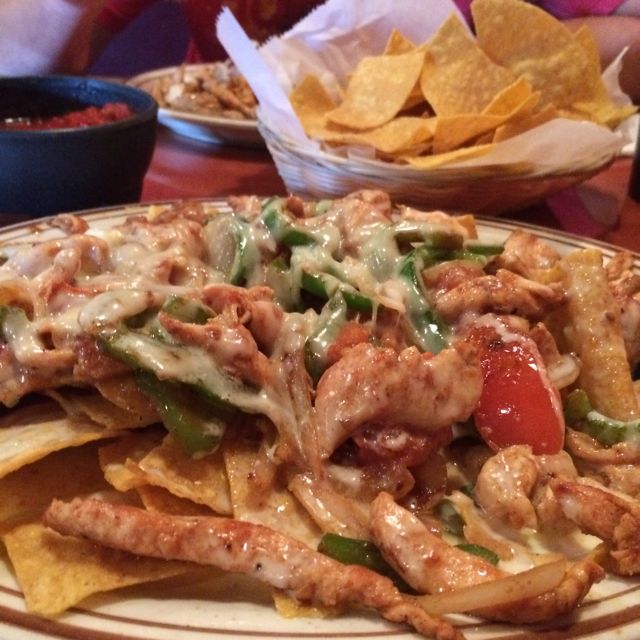 Of course, with all the ups, there has to be at least one let down, right? A friend and I decided to beat the crowds for Cinco de Mayo…so we went on the FIRST! Lol. I had a MAAAAAD craving for some nachos, but unfortunately, Casa Blanca’s fajita nachos left me wanting. Guess I’ll just have to stick with my beloved El Bracero when it comes to Mexican…where I know I can also order a margarita the size of a small child! But damn, would you look at that CHEESE?! 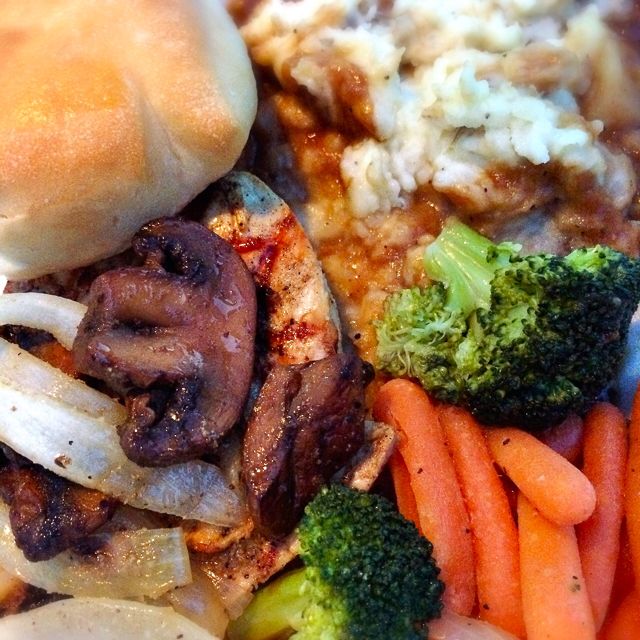 On Cinco de Mayo, I actually went out for American food….but not just any American food…American COMFORT food! I had a bit of time before work, so I met up with a friend at our new Texas Roadhouse. I ordered the grilled chicken with sautéed onions and mushrooms, mashed potatoes with gravy, and a side of veggies. While we chatted and nibbled on some rolls with the most AMAZING cinnamon butter, we kinda lost track of time…we actually ended up waiting nearly 45 minutes for our food! When we mentioned something to the waiter, it sounded like our order got misplaced. Just when we were thinking we were gonna have to leave (so I wouldn’t be late to work), our food came out with a manager saying our meal would be comped! #winning

Plus, I ended up with enough leftovers to make THREE meals! The first two escaped photo-documentation, but I certainly saved the best for last… 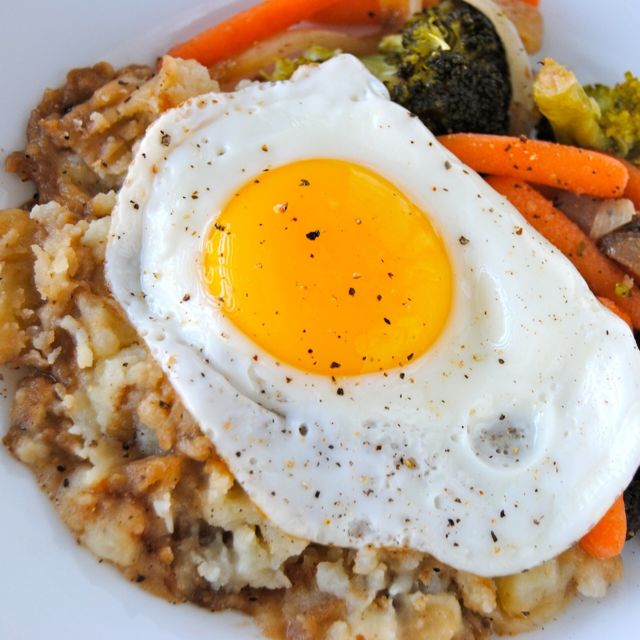 I’m sorry, you don’t top your mashed potatoes and gravy with a fried egg? Because I most certainly will every time from now to the end of my days! Oh my GAWD! Yeah, totally patting myself on the back, taking a bow, and blowing kisses to my imaginary audience for this combination!

And well, if you guys know me at all, then you HAD to know this was coming…

Any big plans for the weekend?