All Sauced Up with Nowhere to Go!

Posted on January 19, 2015 by kissmybroccoli

I hope you all had a great weekend! Mine was BIZ-ZEE to say the least, but since the last thing I want to do is talk about all the super fun hospital shenanigans that went down over the last three days, how about we talk MY weekend? Last Thursday started with some grand plans. There was a road trip involved…and family, and food, and fun! But then, halfway through our trip, this happened…

Being the fact that our little excursion would bring us back around to this spot eight hours later with even COLDER temperatures, we decided it best to head back and not chance getting stuck on the side of the road in the middle of nowhere.

Back at la casa later that day, the cabin fever started to set in. After cleaning the fridge, sweeping and mopping, rearranging the spice cabinet, bookcase, AND dvd racks, I figured it was about time I called in some reinforcements. 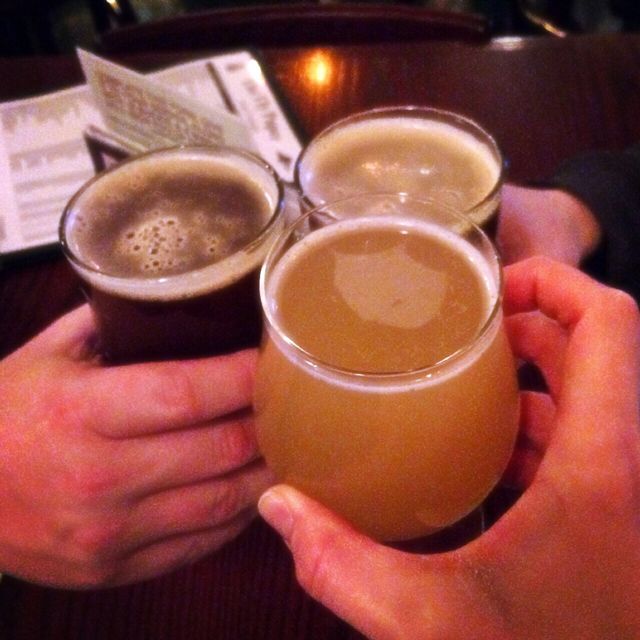 Reinforcements who happen to have VERY good taste. 😉

Since my last trip to The Flying Saucer in Nashville, I’ve been dying to go back and grab another slice of that mouth-watering pizza. After realizing during this visit, that they have a rotating menu of over 250 beers, I started carving my name under one of their leather couches. 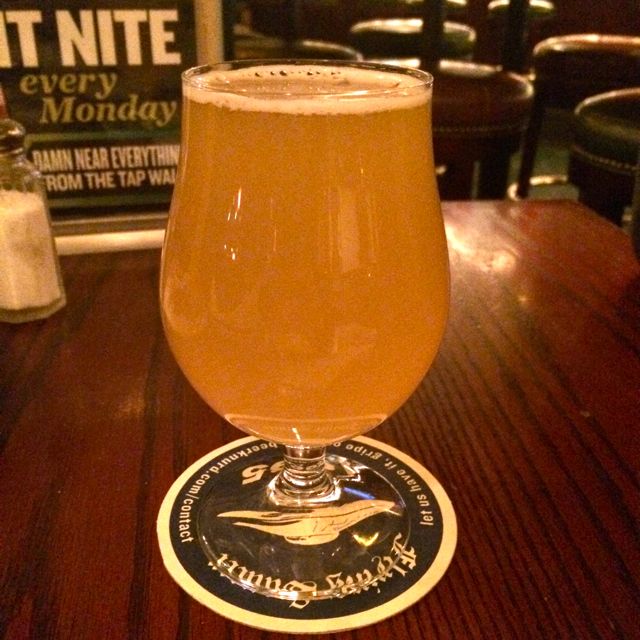 I started the evening with “my beer”. Man, did it hit the SPOT!

Although I thought I was in for some pizza that night, once we finally got there, I was STARRRR-VING and basically wanted to eat every goddamn thing on the menu. Luckily, I have reinforcements who know how to handle me during my Hangry Heather moments… 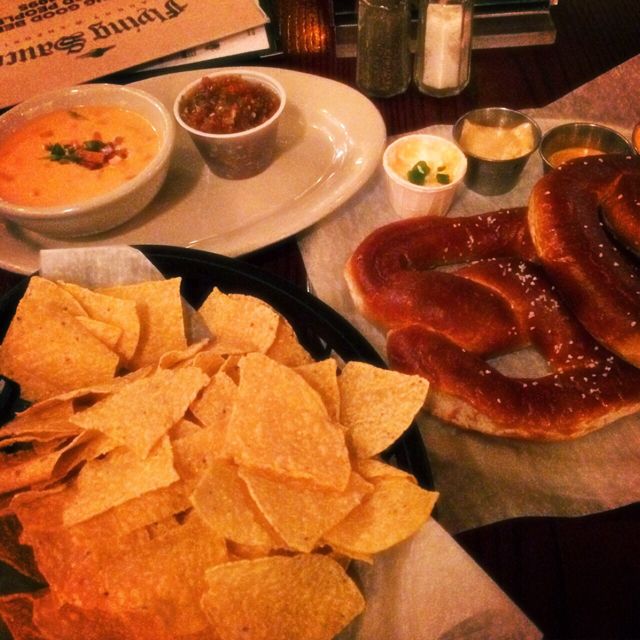 ‘Cause I mean, HOW could you go wrong with chips, cheese, and soft doughy perfectly salted pretzels the size of your HEAD…served with FOUR different dips (spicy mustard, honey mustard, cream cheese and chives, and guess what…MORE CHEESE!)

Obviously with that smorgasbord of carby deliciousness, I needed a little something to wash it all down…since ya know, my Fresca, I mean BEER, was long gone by then. 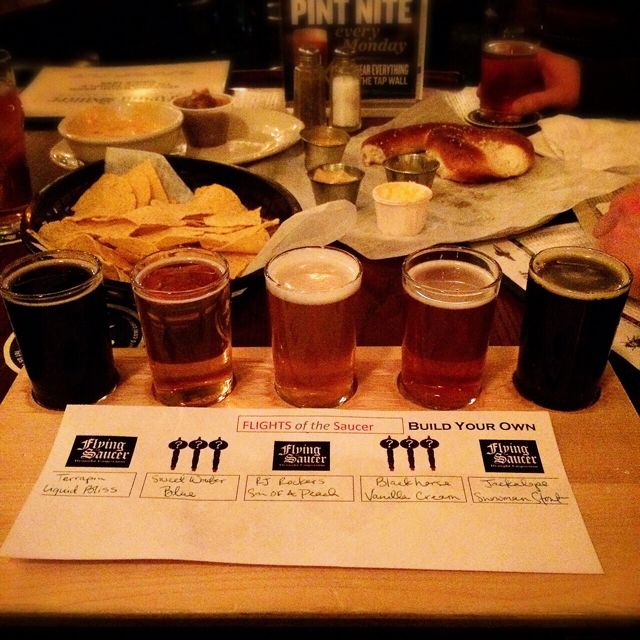 I’m not much of a have-a-big-ol’-glass-of-beer kinda gal. No, since my college days of drinking trailer park beer (no judging, I used to live in a trailer park) are behind me, my tastes are much more refined and my attention span much too short. Which is why beer flights are absolutely perfect! A little taste to see if I like and then a couple more to savor before moving on to the next best thing!

I ordered the Terrapin Liquid Bliss (a chocolate peanut butter stout that was sadly just “ok”), Sweetwater Blue (a light bodied ale that I swear tastes straight up like a blueberry muffin), RJ Rockers Son of a Peach (a lambic with a hint of peach flavor that kinda left me wanting more), Blackhorse Vanilla Cream Ale (best damn ale ever…though I may be a little locally biased), and the Jackalope Snowman Stout (whose “mocha” flavor translated into “oh why don’t you just throw some old coffee grounds in my beer?!”…unfortunately, this one was unbearable for all three of us.

Since I was to be the driver that evening, I switched to water after I was done “flying” through my sampler of beers, but the night was still young! We were having a great time…talking music, memories, and whatnot when our waitress came up and asked how we wanted our check. We were a bit confused. It was still at least an hour till closing time. Then our red-haired little pixie informed us that they have a cap of six beers a person each night. Umm, excuse me?

Even after informing her that I was driving that evening, she said she could not serve my friends any more drinks. She did of course offer ME more drinks. Because, you know, we should just let three people walk out of the bar drunk instead of two with a designated driver. Yeah, that makes a TON of sense! Needless to say, I don’t think we’ll be signing up for their VIP drinking club anytime soon. 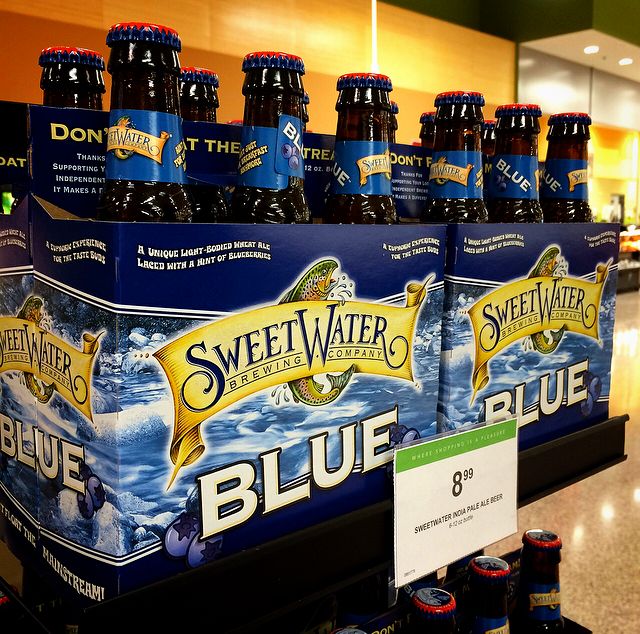 So I guess it’s a good thing I found a six-pack of my blueberry muffins at Publix the next morning! Who’s coming over for breakfast? Don’t forget the bacon!! 😉

Are you a beer drinker? What’s your favorite?

What are your favorite pub snacks?

7 Responses to All Sauced Up with Nowhere to Go!