Well, I’m back safe and sound from seasonally bipolar (rain, hail, and sunshine all in the FIRST DAY) Colorado! Ok, ok, so I’ve been back for five days but well…? Life happens. While it’s been a crazy busy week, I have gotten the much-needed time to digest everything from last weekend. So now I’m prepared to give you my best recap yet! Please be sure your tray tables are secure in their upright positions. If oxygen masks are needed, they will release from above. Now please, enjoy the ride… 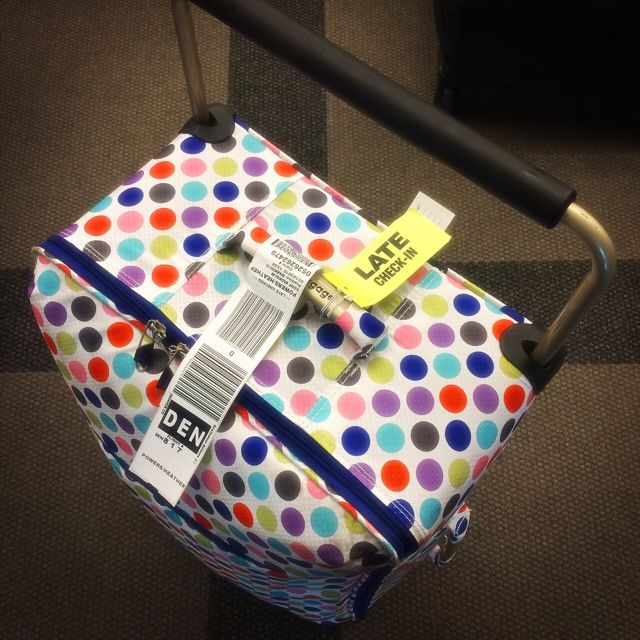 I learned a lot this past weekend…things about life and things about myself…and the first lesson came minutes after my arrival to Nashville’s airport when I checked in 40 minutes prior to my flight. Yeah, they don’t like that so much. And you get a bright little “you’re a dumbass” tag on your bag for it too. By the grace of the Blend gods, my bag arrived WITH me in Colorado around mid afternoon. Otherwise this recap would have gone an entirely different route and maybe not have been safe to read at work. 😯 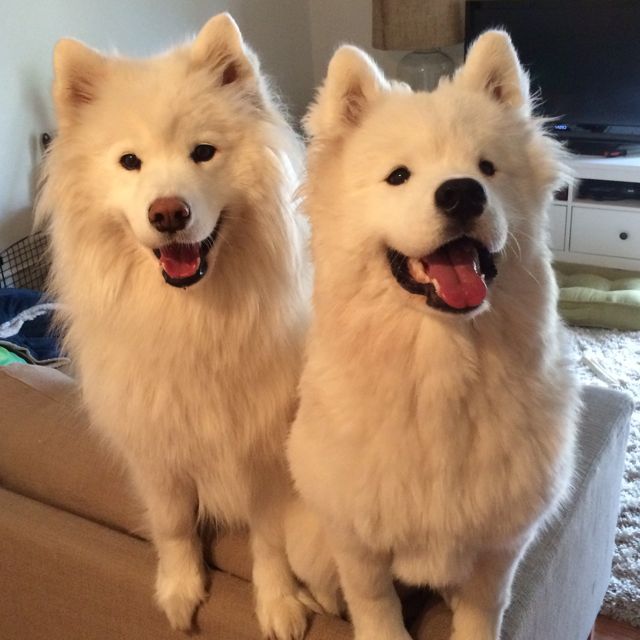 My oh-so-gracious hostess, Kait, picked me up from the airport and brought me back to her brand new place in Denver where I was formally introduced, by big furry hugs and kisses, to Tinkerbell and Meeko, the YouTube and Instagram starlets themselves.

After cleaning up a bit, we ventured out for dinner and found an incredible little pub called Bull & Bush. Over a flight of beers, a plate of asiago cheese dip with ALL THE DIPPERS, and a couple of entrees that didn’t make the cut photo-wise, we shared stories, laughs, and basically marked Kait’s calendar for all the days she had to come back for meal and drink specials. 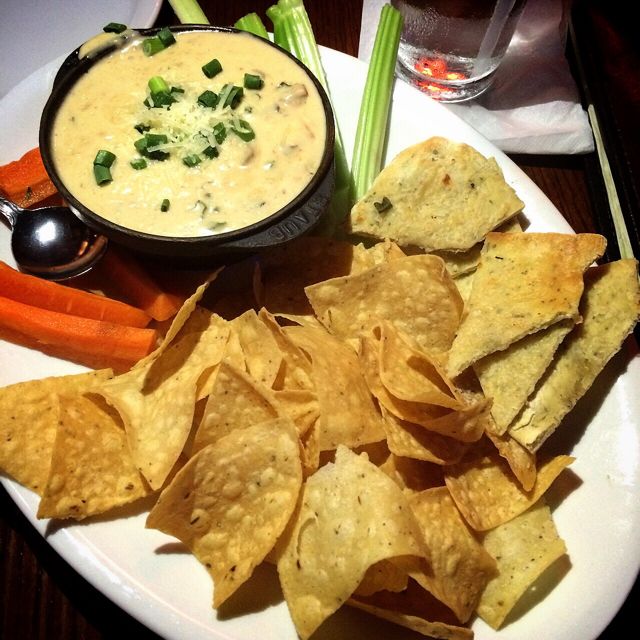 The next morning, while Kait went off to do her yoga teacher thing, my girl Melissa picked me up and we had some fun before heading to Chautauqua to check in. We hit up Whole Foods, spent waaaaaay too long in a kitchen store called Peppercorn, and finally ended up at some random sushi place on Pearl Street just before we gnawed our arms off.

When we first arrived, we were greeted by Lindsay, Janetha, and Lauren, loaded up with all KINDS of swag and led into a room where I just about died from happiness… 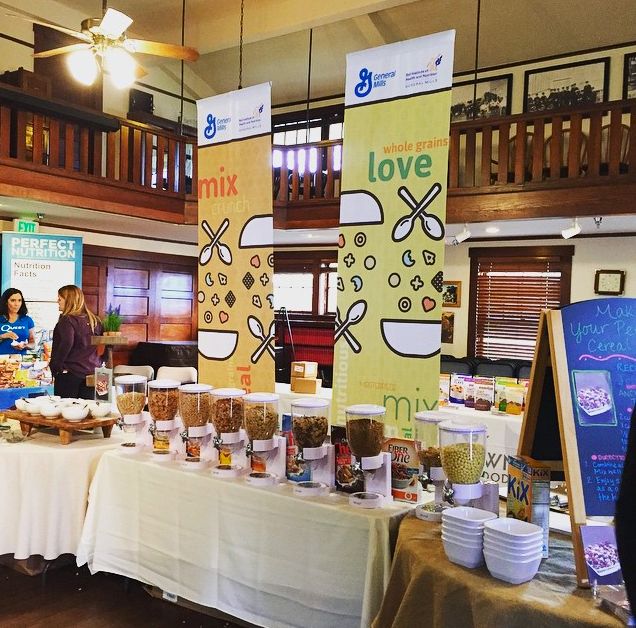 A table full of not one, not two, but NINE different cereals set up by General Mills. We were told to mix and match as much as we wanted to create our own signature trail mixes. They also had add-ins like white and milk chocolate chips, nuts, marshmallows, and peanut flour! 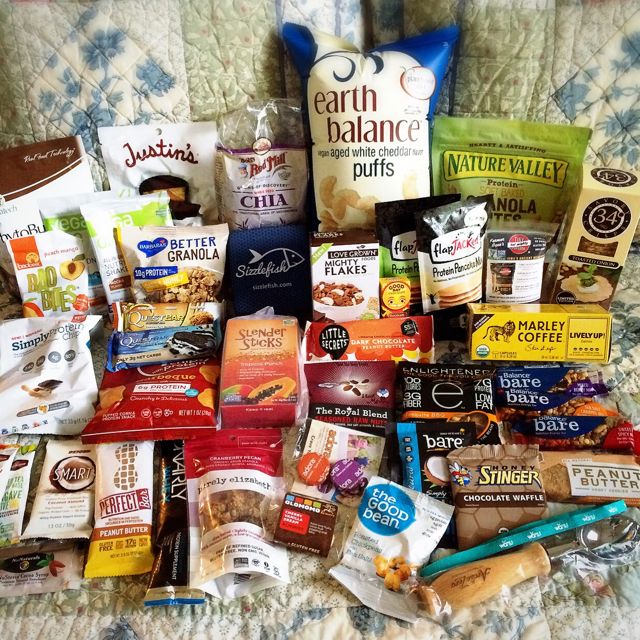 After formally checking into Chautauqua Park, we settled in, unpacked, and I staged the obligatory swag pic…which was only about HALF of what I came home with!
*Insert hear no, see no, speak no evil monkey emojis here* 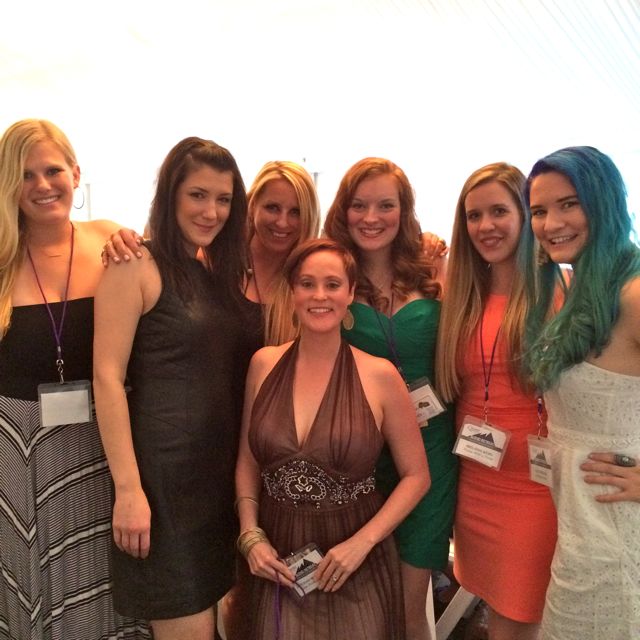 Then it was time to get all gussied up for dinner! Here’s the whole crew (minus Heather who somehow didn’t make it in the frame in time): Carly, Amanda, Lucie, me, Melissa, Kait, and Meghan in front. 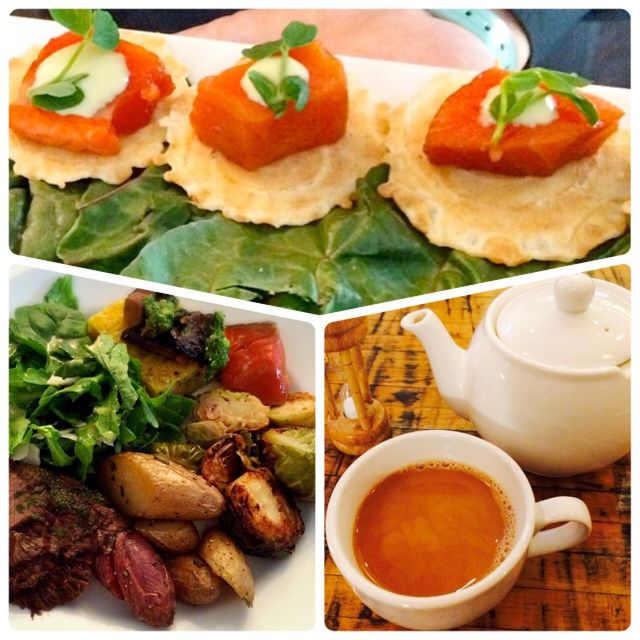 For the next few hours, we helped ourselves to cocktails, apps, and an incredible dinner sponsored by Sizzlefish, 34 Degrees and WANU. And while most everyone was still in the digging their Arctic Zero sundaes a little later, my crew was nice and toasty at the dining hall bar, cozying up to each other and mugs of vanilla nut rooibos tea. 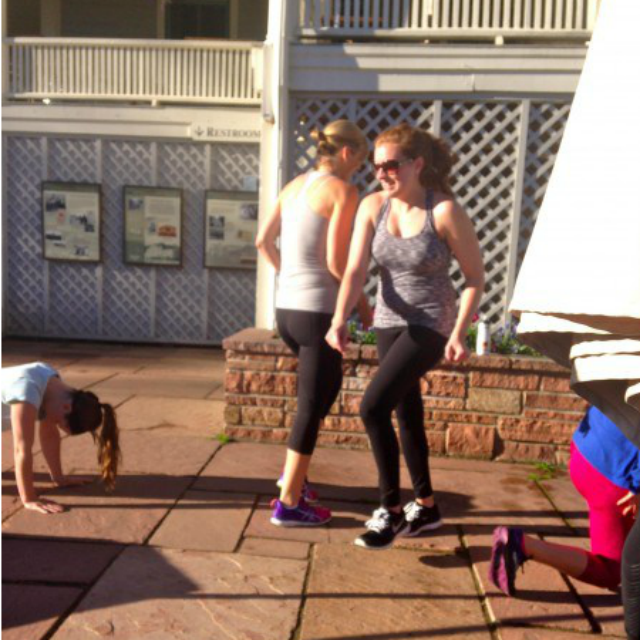 We woke up bright and early the next morning for boot camp sponsored by Gnarly Nutrition. It was pretty intense…plank jacks, lunges, and traveling burpees all UP HILL, but I have to say I’m pretty proud of myself for hanging in there and giving it my all without overdoing it. 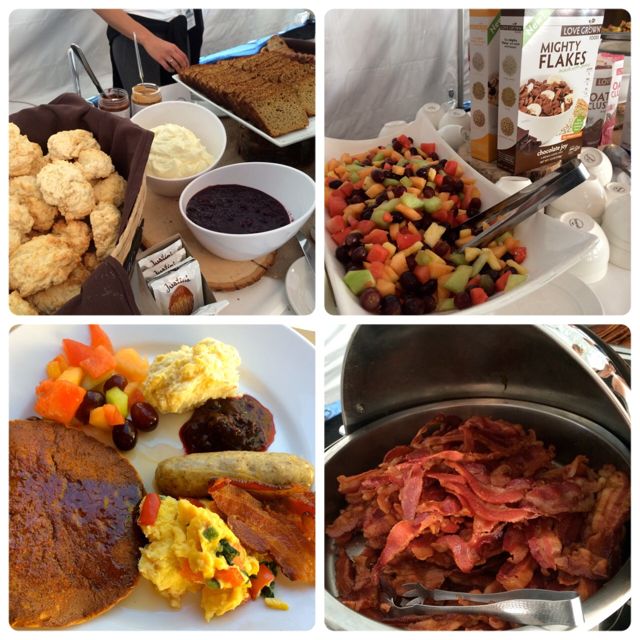 But I was more than ready for breakfast by the time it rolled around! And we had an amazing spread! We got to try the new carrot spice pancakes from Flapjacked along with an assortment of granola and cereals from Love Grown Foods and Justin’s complete line of nut butters. Though I have to say I was most excited about that gigantic tray of CRUNCHY bacon! 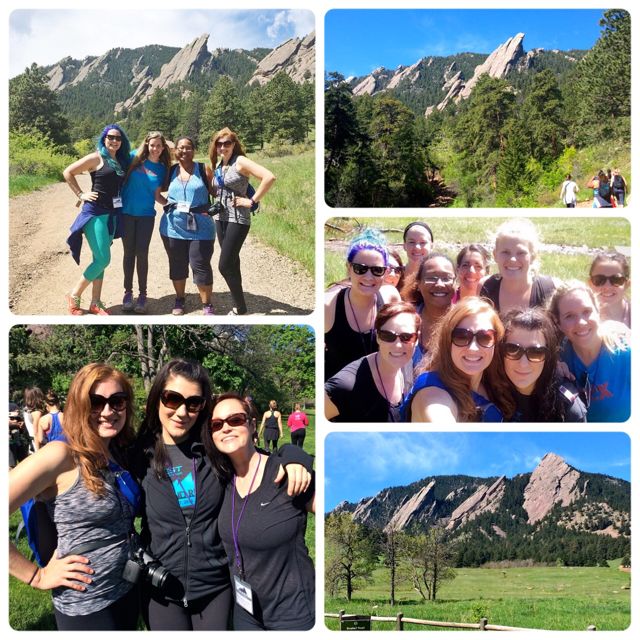 Soon after breakfast, it was time for our hike in the Flat Irons sponsored by Detour. While I wish we’d been able to go as far up as we did back in 2012, we made the most of our time and I even remembered to break out the selfie stick for a big group shot! When we got back, we refueled with some snacks from Earth Balance (mmm, PB Pops!) before deciding to pile up in a car and head down to Pearl Street before the farmers’ market closed. 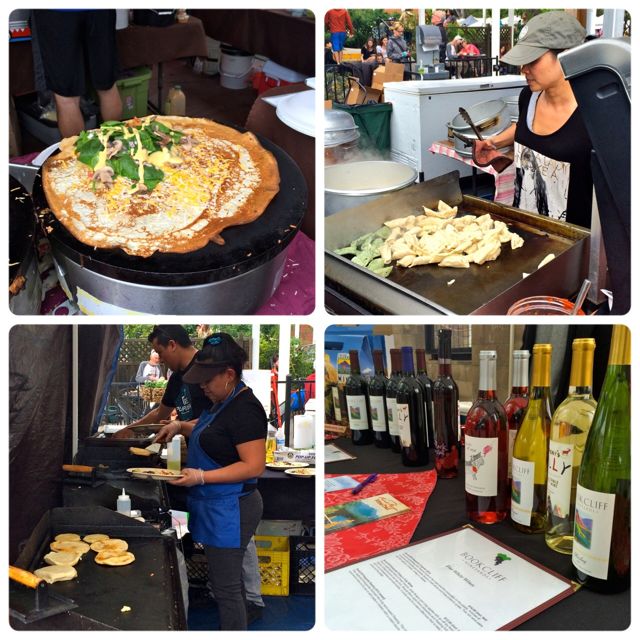 You guys, the market was INSANE!! So many tables, so many samples…I swear I had lunch twice! Carly, Meghan and I went booth to booth sampling all sorts of foods…from gluten-free cakes and local honey to cheese, dips, and bread. We gathered up a fair amount of it all and decided in lieu of going out for dinner that night, we’d create a hodge podge of stuff to eat at the cabin instead! 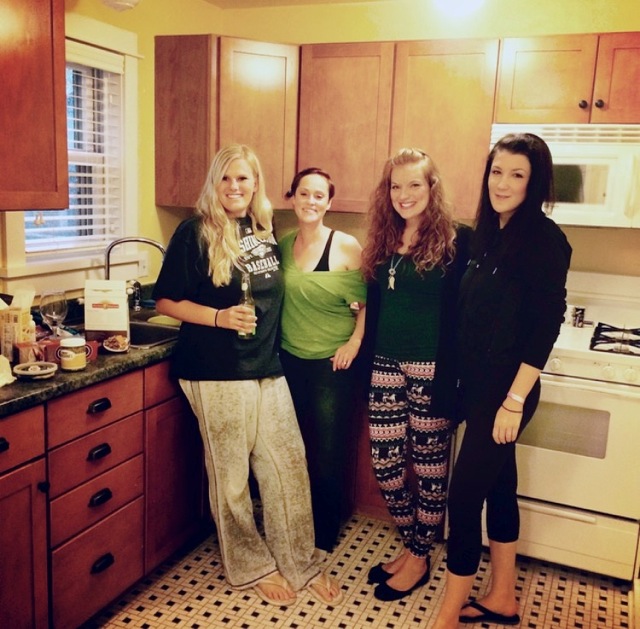 So after getting back and cleaning up, I hopped the two cabins up to join Carly, Meghan, Amanda (who I stole this pic from), and Lucie for a night of champagne and cheese, crackers and crudites, and cards. 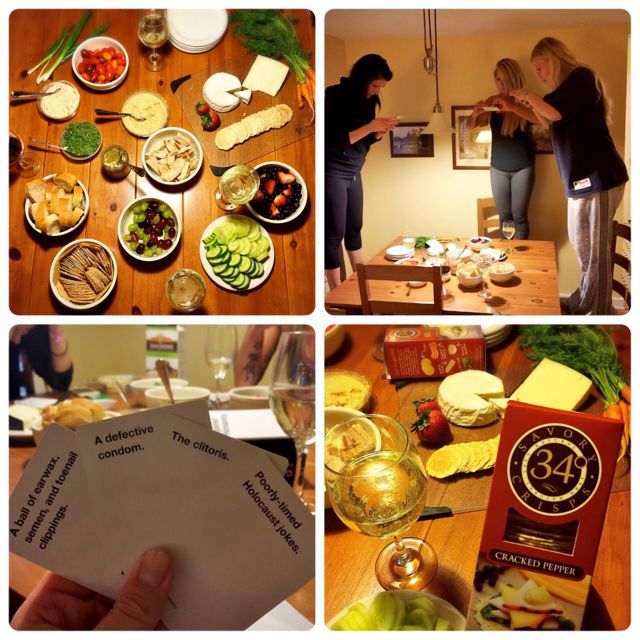 The spread was amazing, but the company even more so. It was so great to have a low-key night and just hang with some of my favorite girls while kicking all their asses in the most incredibly inappropriate card game ever. 😉 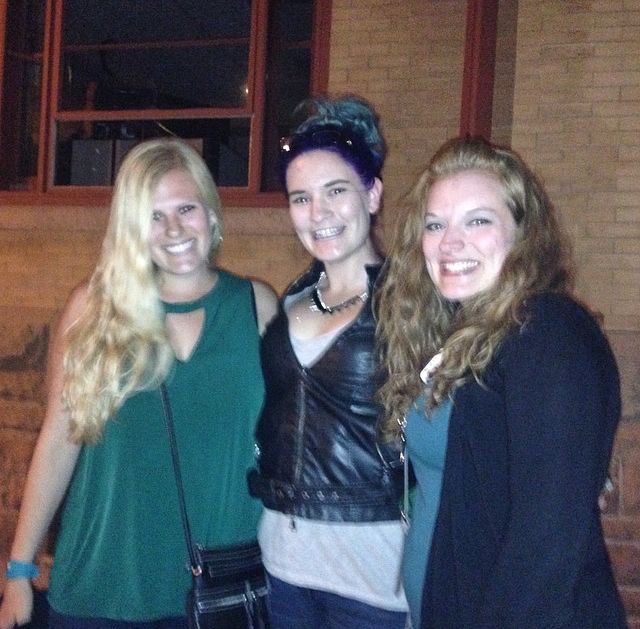 Later that night, Carly and I met up with Kait and went back to Pearl Street for a little fun. We tried curious drinks from a speakeasy, danced to some great music, and forced some random person to take a picture of us on the street. Good times. I didn’t make it to bed that night until after 1am and then was up only four hours later to begin my favorite Tetris game “Fit All The Swag in Your Bag”. 😆 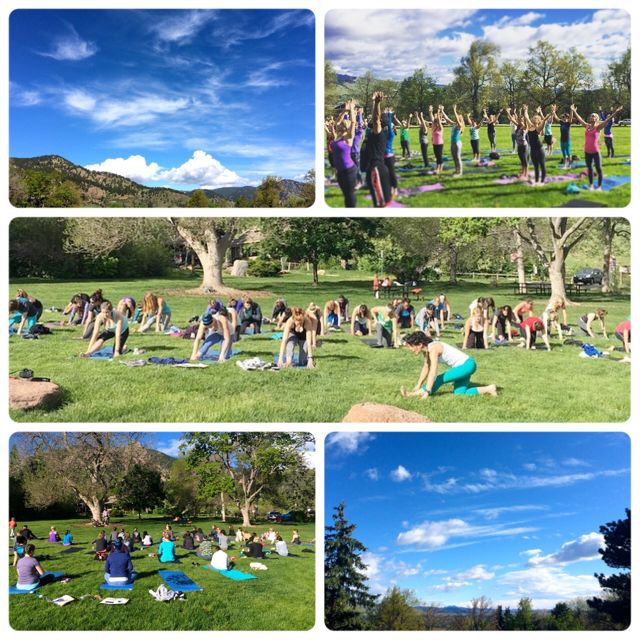 Then I was off to yoga my ass off in front of the mountains…do you see me? We had a nice practice sponsored by Bhakti Chai under a perfectly blue sky and it was just what we needed after the workout, hike, walking, and dancing we did the day before. 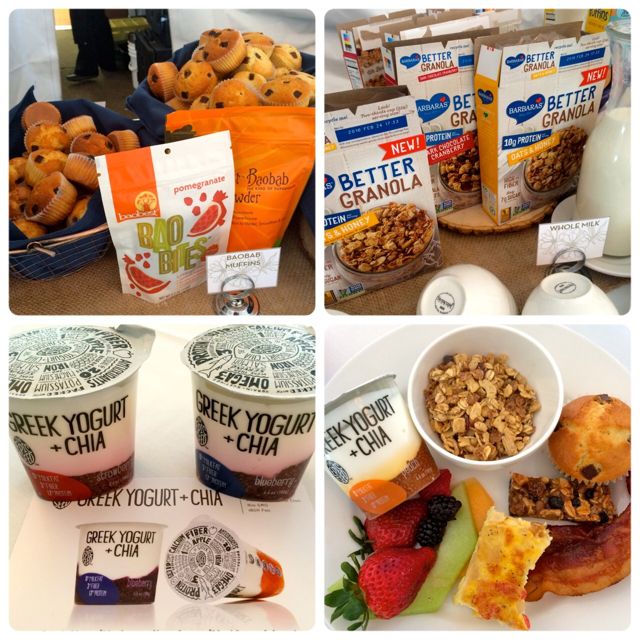 And then my favorite part happened again…BREAKFAST! This time sponsored by Barbara’s, Good Belly, Baobab Foods, and Epic Seed which was surprisingly good since I don’t normally care for chia seeds in my yogurt. Again there was another vat of crunchy bacon, but this time, it was the muffins that stole my attention. I may or may not have absconded with four or five of them on my way out. 😉 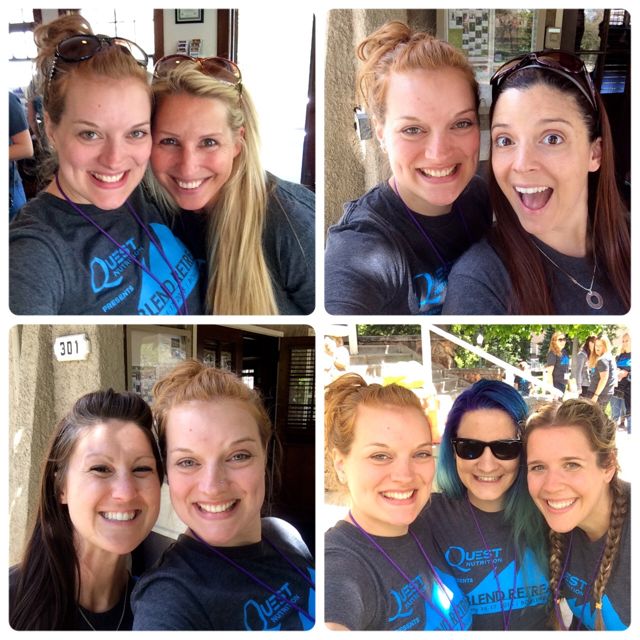 Before we knew it, our bags were packed, our keys turned in, and it was time for the closing ceremony held by Nest Fresh Eggs. Kait found out that she won the Quest photo contest where Melissa and I helped her become a mermaid on a quest, Carly won a Blendtec, and I came away with a stellar prize pack from Sizzlefish. After the excitement of the raffle died down, we all did our best to get as many hugs and selfies in as possible! 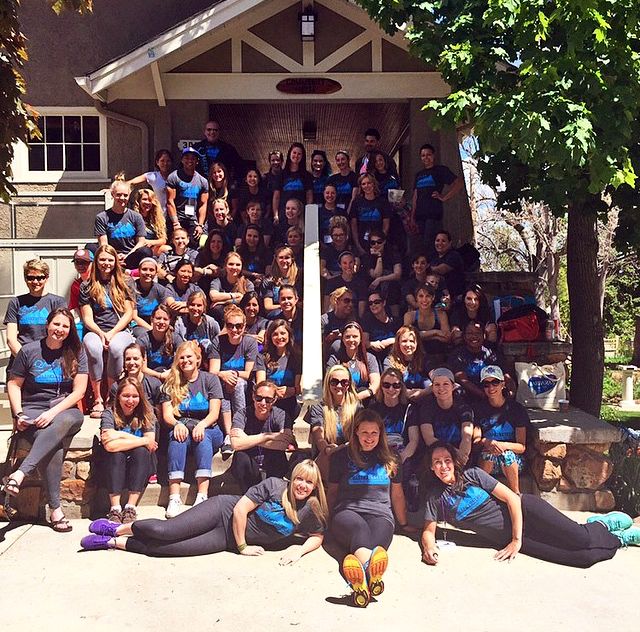 To reiterate every single detail AND the emotions to go along with it would be next to impossible (to write or to read), but I can’t publish this recap without saying that this was one of the best weekends of my life and by far, the best Blend yet! For me, everything felt so natural and balanced without even trying. I was able to further friendships with ladies I’ve known for years, meeting some in person for the first time ever, and also getting to know people I never would have met had they not attended this year.

Ok, now I’ve got to sign off before I get teary. Just let this serve as testament:
If you’ve ever thought of going to Blend, seriously consider it next year. I promise, you WON’T regret it!