Posted on February 17, 2012 by kissmybroccoli

Anyone else feel like it took two weeks for Friday to finally get here? It’s just been one of those weeks for me (probably because I was working late AND have been battling this sinus funk that seems to be going around)…needless to say, I could use a little lighthearted humor to start my weekend off right! 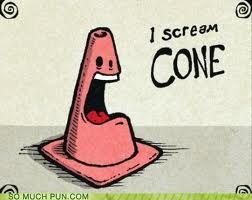 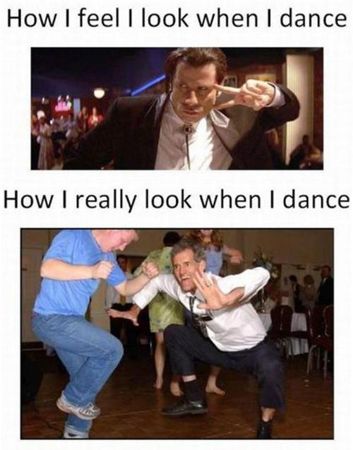 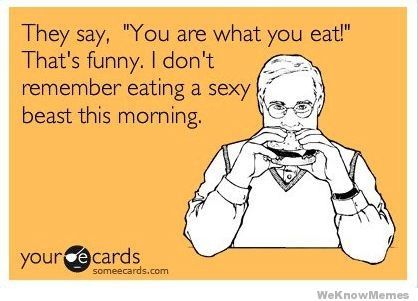 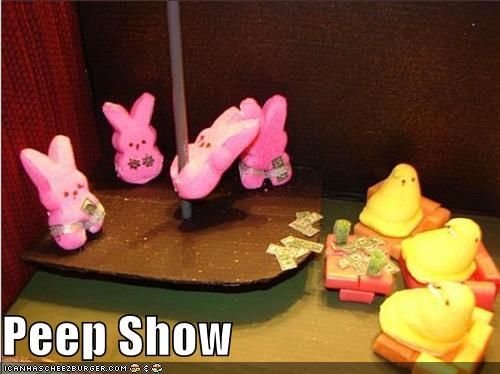 That last one killed me!

Hope you guys enjoyed those…now how about that breakfast pizza, huh?

For the last few weeks, thanks to the drop in the temperatures around here (really Mother Nature…make up your friggin mind already), I have practically LIVED off of oatmeal. Not that that is a problem, but this week, having a bit more time for breakfast, I decided to change things up a bit.

Who around here likes omelets?

You know, you crack the eggs, let them spread and coat the skillet, fill them with delicious goodies, pause to admire how beautiful the colors are, and then slap yourself on the forehead after you “try” to flip it and are left with some sort of egg-tastrophe that nowhere near resembles the picture you had in your head…

Plus there’s the time, the precision…omg, who has that kind of time?!

AND…while your at it…why not get really wild and turn it into a pizza! 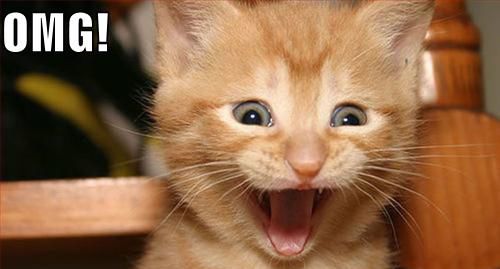 1. Saute onions and bell pepper over high heat in 1/4 tablespoon olive oil for 2-3 minutes.
2. Add spinach, cover, and allow to cook 2-3 minutes longer, or until spinach is wilted.
3. Remove veggies from pan.
4. Coat skillet with 1/4 tablespoon olive oil (or cooking spray) and reduce temperature to medium heat.
5. Return veggies to skillet, spread evenly across skillet.
6. Pour in egg whites, cover, and allow to cook for 4-5 minutes or until egg starts to set and the edges start to turn brown and pull away from the sides of the skillet.
7. While you wait, pop your tortilla under the broiler and toast just until it starts to get crispy. Once done, allow to cool for a couple of minutes and then spread with cream cheese.
8. Uncover skillet and allow to cook 2-3 minutes until egg is set and no liquid remains on top.
9. Using a large spatula, transfer the egg white “pizza” to your toasted tortilla that has been spread with cream cheese.
10. Garnish as desired and slice with a pizza cutter.

I was a little curious about the stats so I plugged it into a calorie counting website and was pretty impressed with what came out: 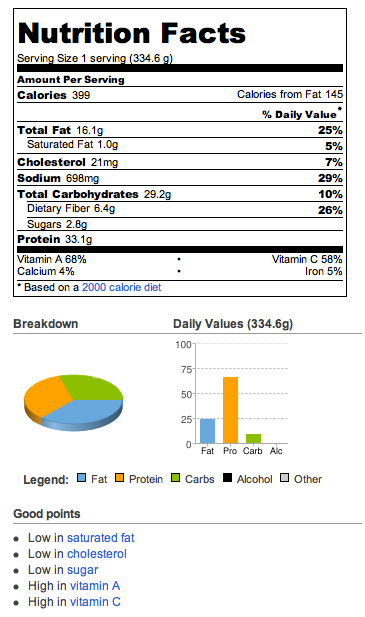 Now the recipe/nutritional facts is for the original version that I first started with. Since then, I’ve made it two other times (and can see it appearing more in future breakfasts) and changed up the veggie “filling” and toppings…

Really guys, the sky’s the limit with this! 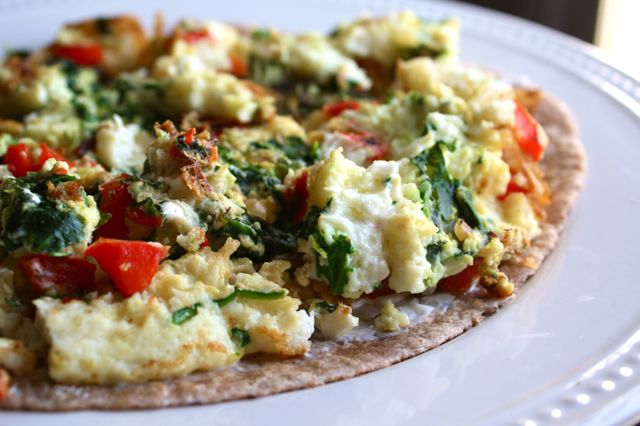 You don’t have to keep it traditional… 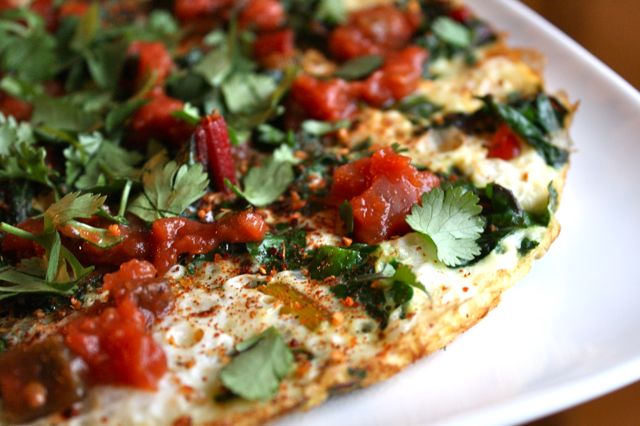 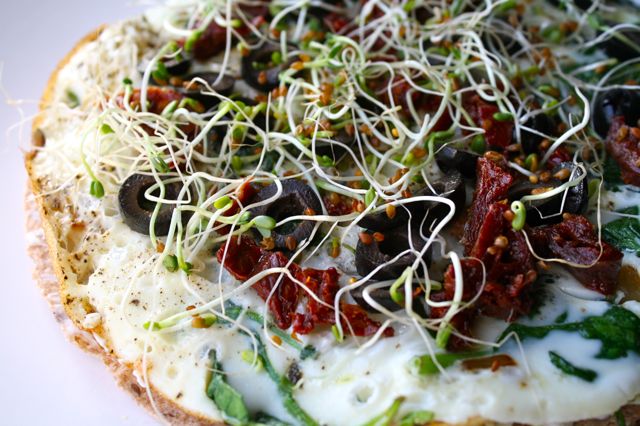 Or why not use the oil from a jar of sun-dried tomatoes instead of olive oil, top with tomatoes, olives, and sprouts (just because you saw them in the fridge) and go Greek…would have been even better had I had a little feta cheese to go on top. 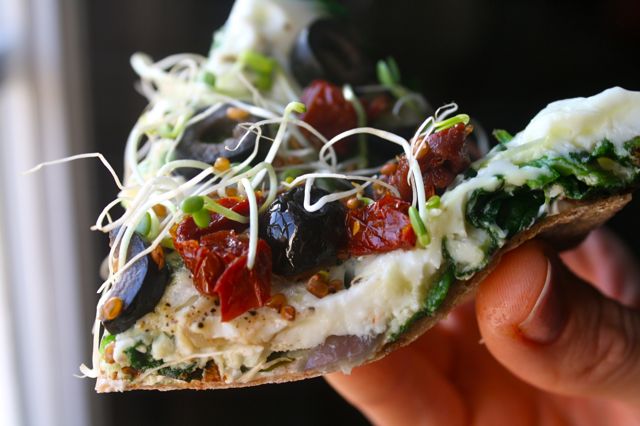 This just happened for lunch: 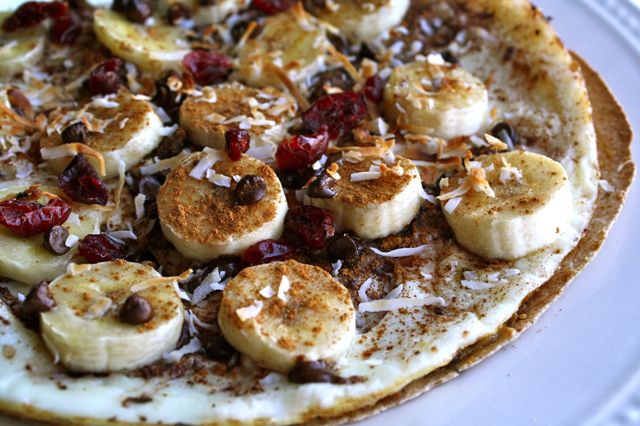 Can I interest anyone in a slice of dessert “pizza”??

Close your eyes…well, after you read this next part….and think how amazing a bite of creamy melty peanut butter, spicy cinnamon, warm banana slices and toasted coconut tastes…

1. Heat a skillet to medium heat.
2. Coat with coconut oil and add liquid egg whites.
3. Cover and allow to cook 5-6 minutes or until almost set.
4. While the eggs are cooking, toast a whole wheat tortilla under the broiler in your oven. 5. Once done, spread with peanut butter and set aside. Do not turn off the broiler.
6. Uncover and sprinkle with cinnamon and allow to cook 2-3 minutes more or until egg is set and the edges start to brown and pull away from the pan.
7. With a large spatula, transfer your egg white “pizza” to the tortilla.
8. Top with banana, chocolate chips, coconut…whatever your heart desires and place back under the broiler for 2-3 minutes until chocolate chips are melted and/or the coconut flakes are toasty.
9. Slice with a pizza cutter. 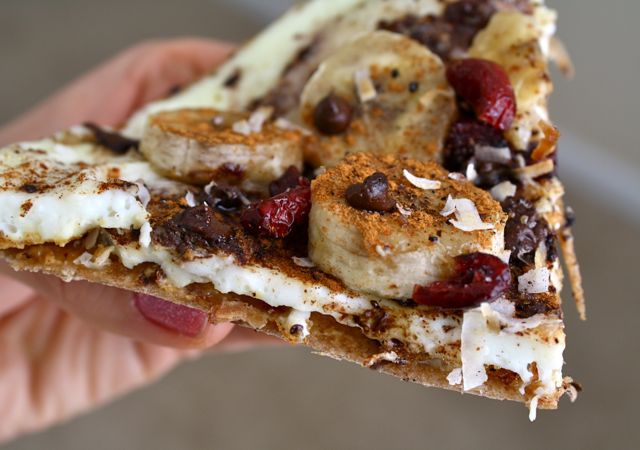 Sweet eggs…think French toast…don’t knock it till you try it…you WON’T regret it!

What has been your “can’t get enough of” breakfast lately?

Any big plans for the weekend?
BB is finally back from being out of town and we both have this Monday off for the holiday so I’m looking forward to spending some quality time with him…plus, I just found out yesterday that there’s a new Greek restaurant in town and I’m dying to try it out!

This entry was posted in Breakfast and tagged eggs, humor, protein, recipe, veggies. Bookmark the permalink.