Posted on August 2, 2012 by kissmybroccoli

How is everybody doing this fine Thursday evening?

Why do I seem to be in such an exceptionally good mood, you ask? Well, this week
(if you subtract out the hours I was imprisoned behind the four walls of the hospital)
has been FABULOUS!

And I can’t wait to tell you why! 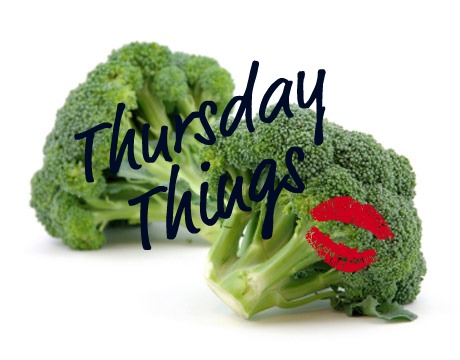 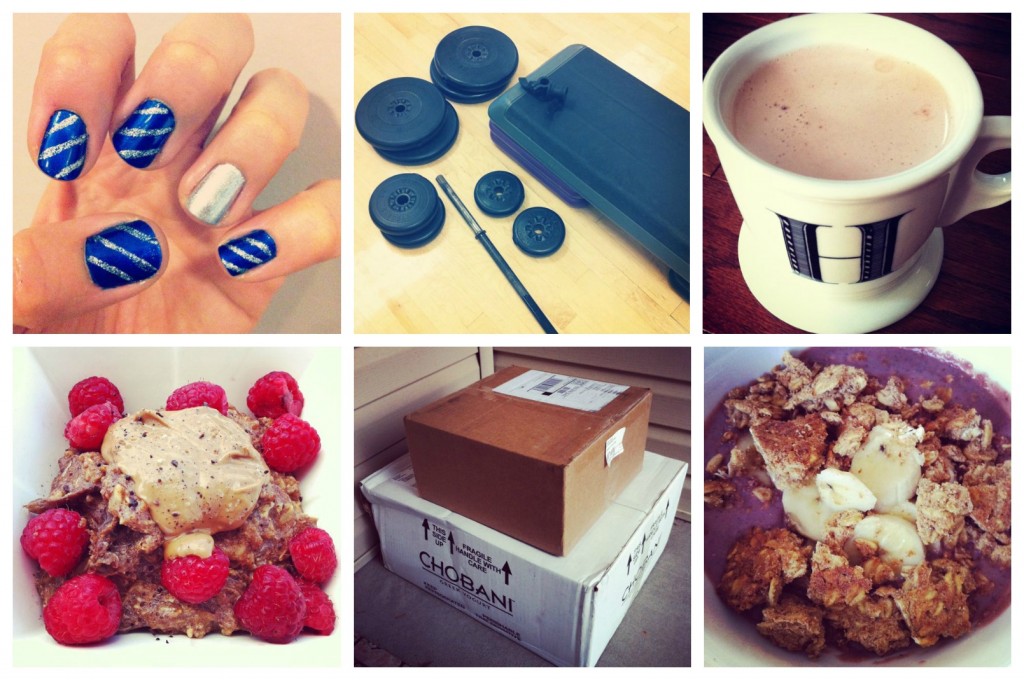 This week has been FULL of excitement…in the way of manicures, Bodypump, hot protein cocoa, CHOCOLATE Egg White Oats (told you I was becoming a convert), mail surprises, and reaching for my Almond Butter Granola Bars like they’re going out of style (crumbled over a bowl of my two favorite GNC powders)…FYI, they went “out of style” about an hour ago when I devoured the last one! 🙁

And for the record, the newest Bodypump (track 82) is KILLER! If they offer it at your gym, you HAVE to try it…you’re legs will be burrrrrrrning!

What’s that? You wanna know what came in the mail?

Oh well, I just HAPPEN to have a pic 😉 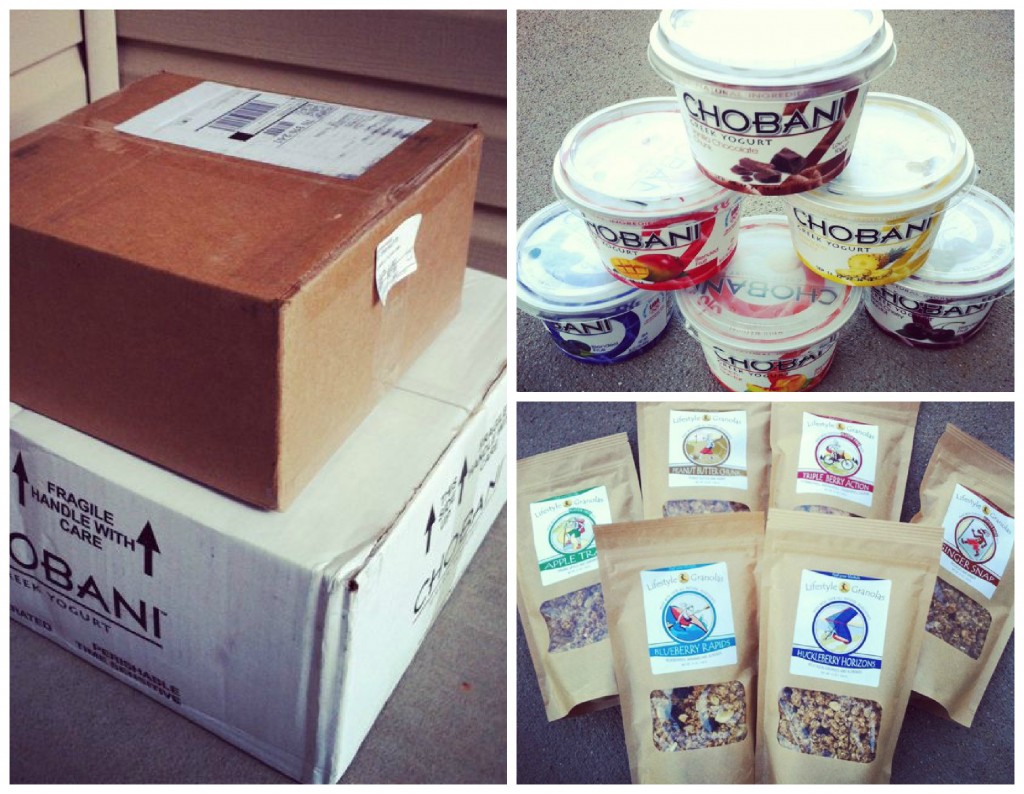 When Chobani contacted me a few weeks ago telling me about their new 16 oz TUBS of yogurt and offering to send me some, you have to know I promptly returned their email with an ever grateful “yes, please, and thank you”! And how exciting (slash coincidental) that my Cho showed up on the EXACT same day as my loot of Lifestyles Granola that I won from Sarah over at Snixy Kitchen!

Yeah, I’m sure this should last me at LEAST a week or two! 😉

And if that couldn’t get any better, my Netrition order finally came in today: 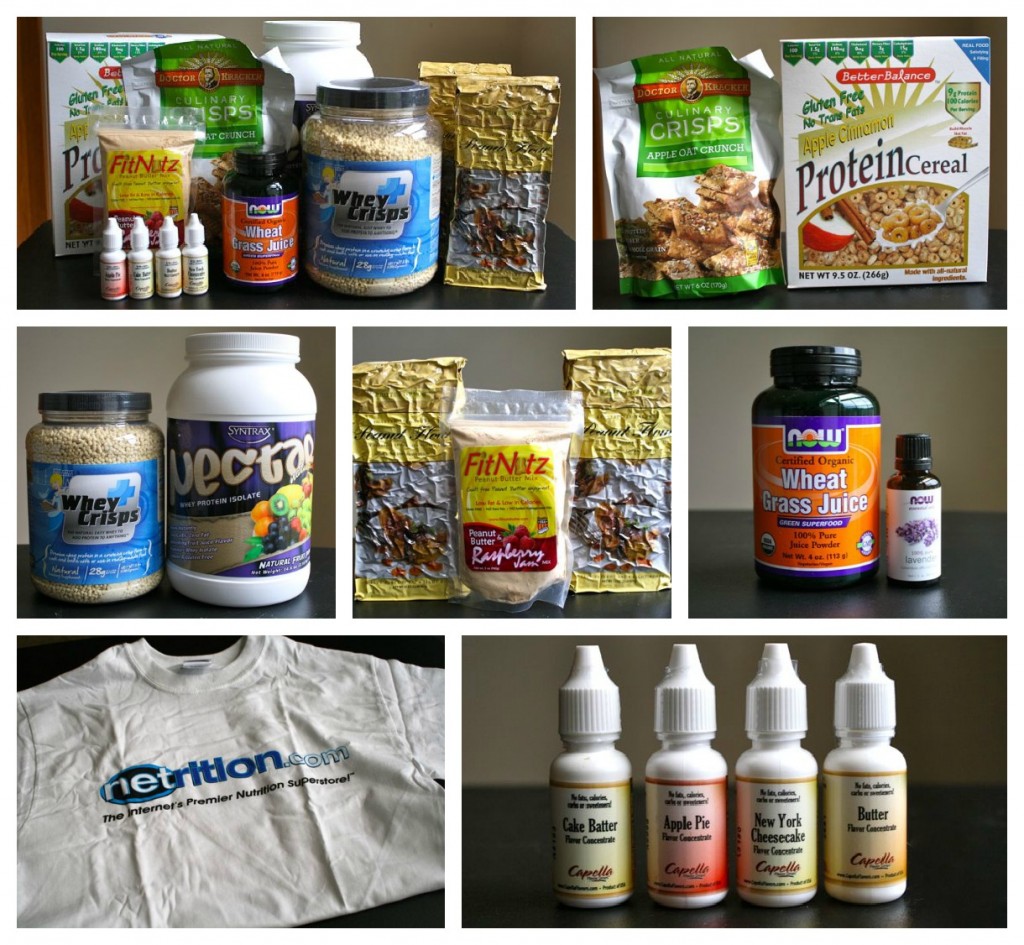 1. Doctor Kracker’s Apple Oat Crunch Chips – just had to get some more when I ran out of my bag from TJ Maxx
2. Ms. Kay’s Protein Cereal – super tasty AND Diva Approved 😉
3. Whey Crisps – new to me, but I can’t wait to experiment with them in some new bars for some added CRUNCH!
4. Fruit Punch Nectar Whey – my favorite brand protein powder…so excited to have a non milk-based flavor for those super sweaty workouts where the thought of something creamy afterwards induces nausea 😉
5. PEANUT FLOUR!!! –  two bags of my regular brand (Protein Plus) plus a new one with raspberry flavor (curiosity got the best of me)
6. Wheat Grass Juice Powder –  hoping to use this for extra energy when I need it on the night shift instead of reaching for a second cup of coffee
7. Lavender essential oil – which will meet with some water and be my new pillow spray!
8. Capella drops – I’ve tried some of these before, but after hearing Laura from Sprint 2 the Table RAVE over the cake batter and butter flavors, I couldn’t resist! And I sure as heck wasn’t passing up the apple pie and cheesecake flavors!
9. And finally, my “FREE” t-shirt – hey, it’s the LEAST they could do for the money I slapped down on this order! 😉 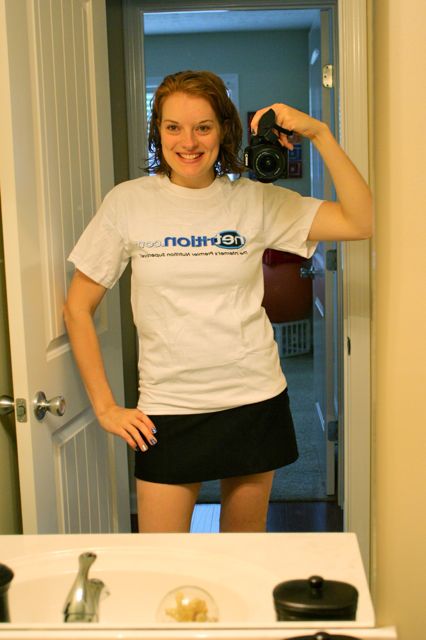 And it fits pretty well too! Forgive the wet hair, I had just gotten back from swimming at the gym.

Speaking of Laura…I guess I should explain the title of this post, huh?

You ever get on those pinning/drooling sprees when you’re catching up on blog posts? You know, where after an hour, you’ve got enough recipes saved to feed starving African babies for the next 6 months?

C’mon, you can’t say you haven’t done it!

But tell me, just HOW MANY of those recipes do you ever actually get to making?

So this week, I decided to go for it…and at the risk of looking like I have a total girl crush going on (ok, so maybe I do…but that’s ok, because we’re going to prom, right Laura?), I thought I’d share what I made this week! 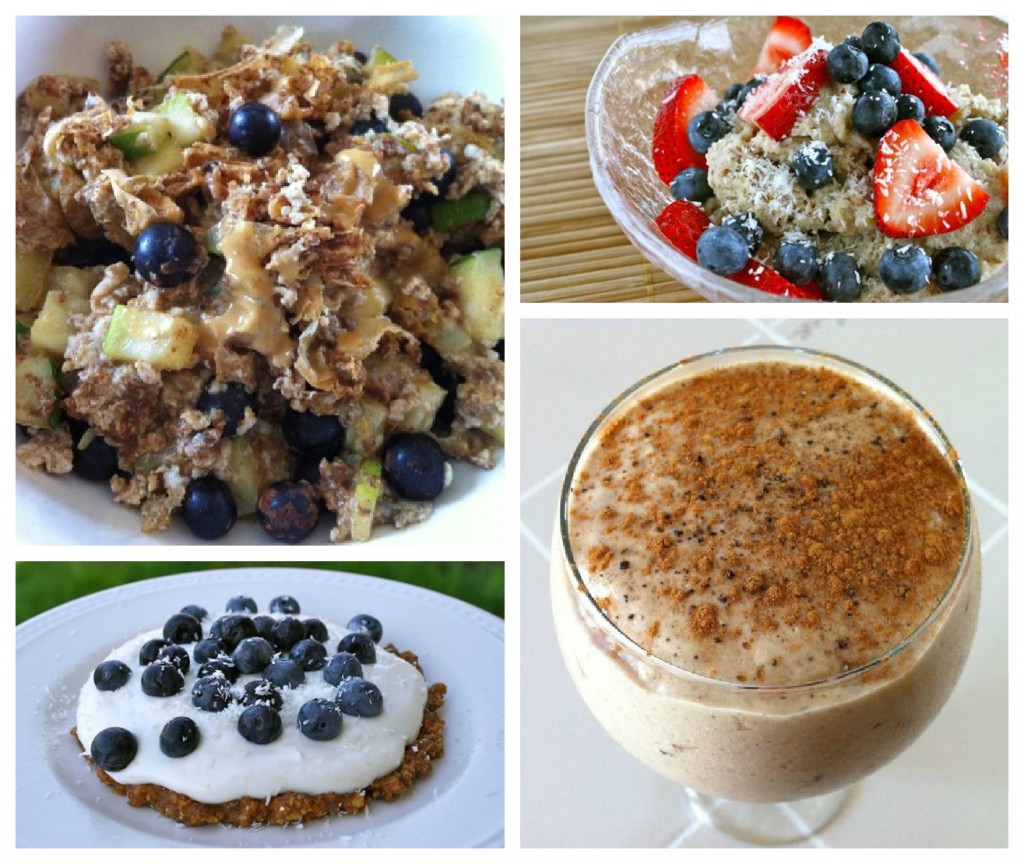 PB&J Zeggs: My take on her Peanut Butter & Jeggs, only I just HAD to put my little spin on it and add zucchini…it was like having PB&J on zucchini bread!
Paleo N’oatmeal: I’ve seen this one going around blog world forever now but I knew I had to try Laura’s version! It was SO good…and actually tasted like a bowl of creamy oatbran!
Blueberry Protein Parfait: I made a few changes with this one since I was out of peanut flour (hence the two VERY large packages I just bought). I added a bit of coconut flour to the “crust” and also a little to the topping and it was fabulous!
Oatmeal Cookie Dough Shake: This was actually the first recipe of hers that I tried and followed the recipe to a TEE…although I didn’t really like the flavor that the nutritional yeast added to it, I thought it had a great texture and thickness and will definitely be making it again without the nooch.

But out of everything that I tried, nothing beats what I had for lunch the other day!

As in, grab a napkin to wipe your chin, because this one is a doozy! 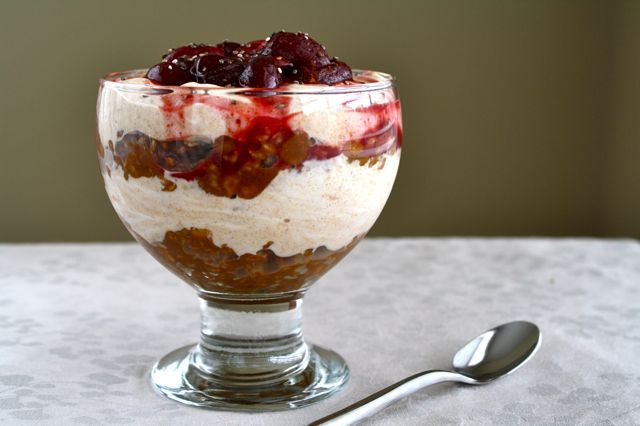 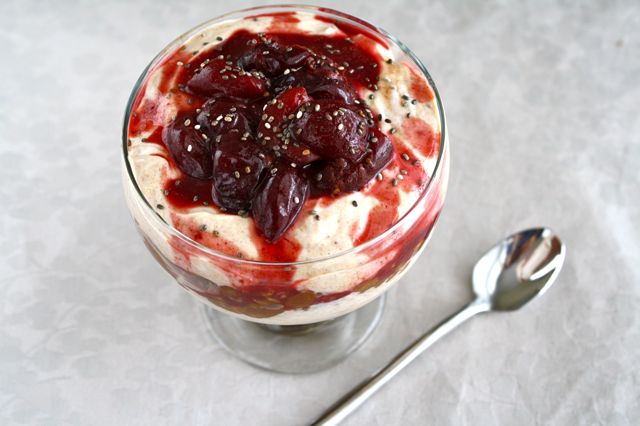 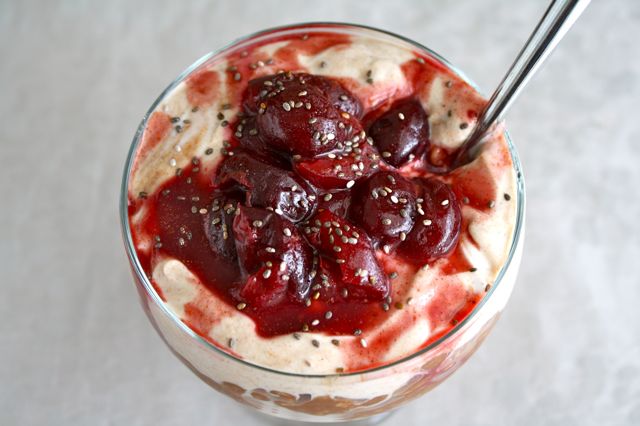 As a person who’s not really a fan of tiramisu (I think I’ve just never had one done the right way), I was intrigued with this rendition of hers…and with a huge bowl of fresh cherries in the fridge, how could I say no to her “melted cherries” topping?

There are not enough exclamation points in the world to put at the end of that!

By far the BEST thing I’ve eaten all week!

The cold chocolatey oats with a hint of coffee flavor, the sweet and creamy flavor of the layers of “cream” and THOSE MELTED CHERRIES!!!

The only complaint I have? 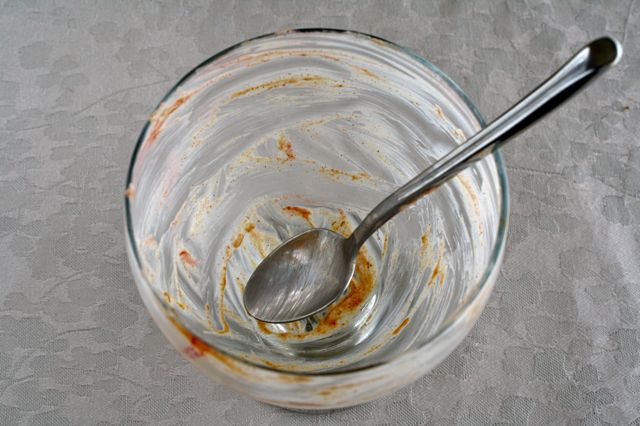 It was gone TOO soon!

Do you have a habit of saving/printing/pinning recipes without ever actually making them?

26 Responses to Sprinting with Broccoli