So glad you all enjoyed my MIMM post yesterday! I can see it being the first of many more to come…gotta show my favorite diva some “luv” you know! 😉

But don’t pack away the streamers, balloons, and noise makers just yet…

Be sure to check in over at Peas & Crayons to see everyone’s drool-worthy link ups and don’t forget to thank our hostess with the mostest, Jenn for rocking our midweeks like no other! 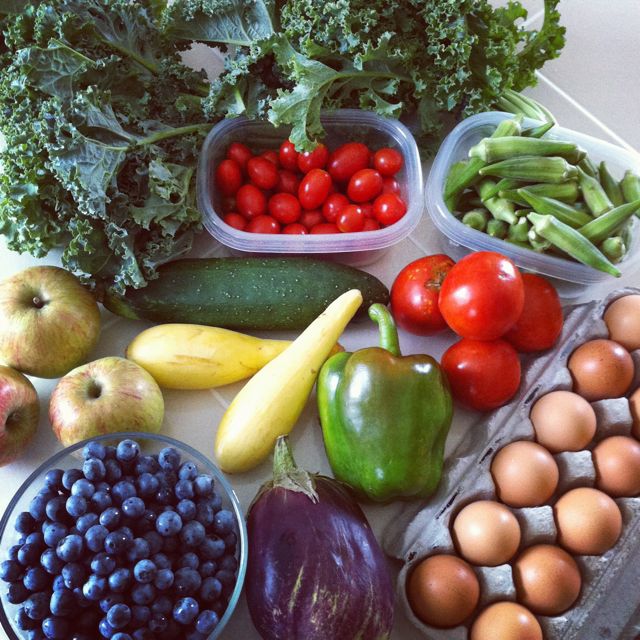 So I thought it’d be fun to show you guys how I’m making my way through my farmer’s market haul because if there is one thing that I consider a staple in the summer, it is definitely supporting our local farmers!

But first, I have a confession.

You know the old adage “If everyone jumped off a bridge, would you?” 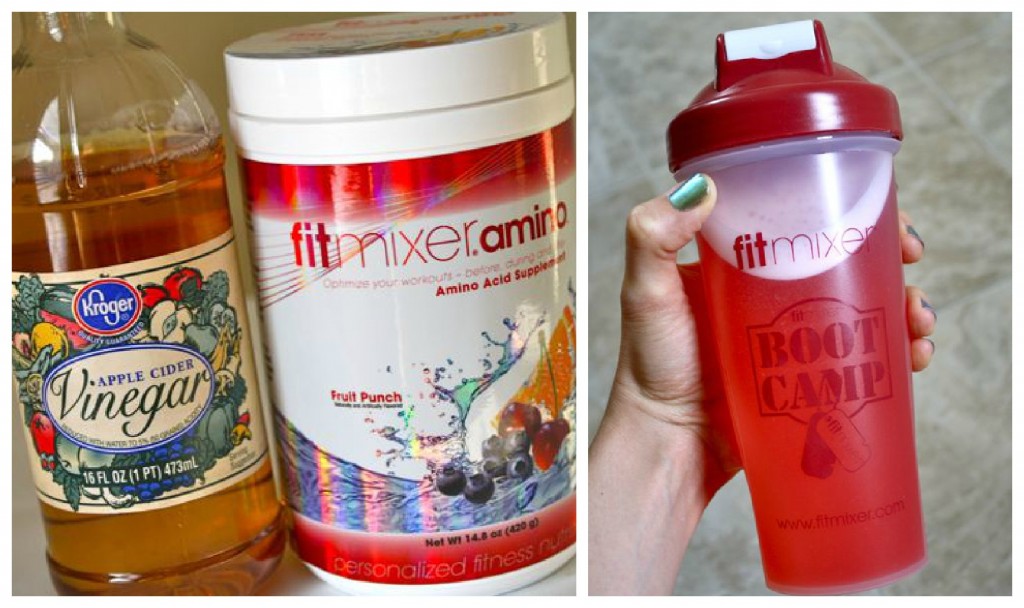 Calee did it, Amanda did it, heck, Jenn even did it…seems like everyone is on the apple cider vinegar shot train!

But truth be told…I’ve never been a huge fan of shots…of anything…so when I saw Laura add some to her Fitmixer aminos, I knew I just HAD to try it!

I am now officially HOOKED! You can barely even taste it thanks to the fruity flavor of the aminos! I have it first thing when I wake up and it definitely helps jump start my afternoon…and I don’t even need coffee! 😉

For breakfast, I decided to make something new! After drooling over Megan’s microwave cake for DAYS, I had to try it for myself…with a few personal touches of course! 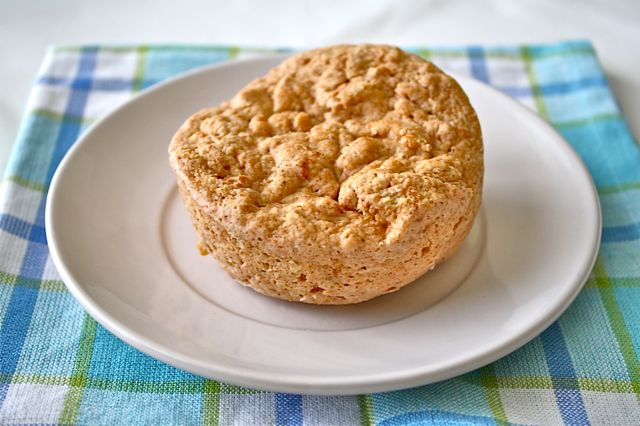 I didn’t have any pumpkin, so I subbed applesauce instead, and while I knew I wouldn’t be able to taste the apple, I just couldn’t get the thought out of my head… 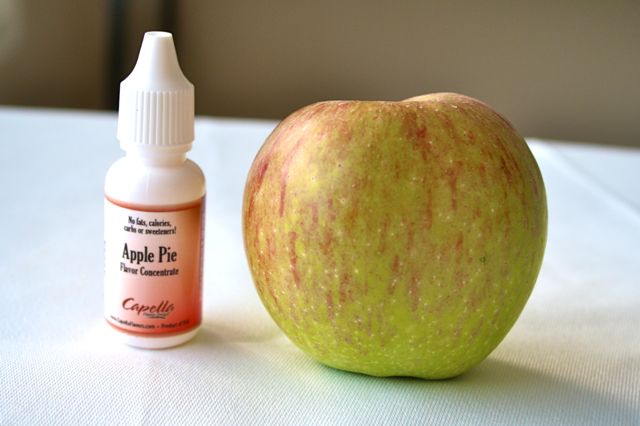 Well, stirred into a bowl of yogurt, topped with crumbled cake and some steamed cinnamon apples annnnnnnnnd… 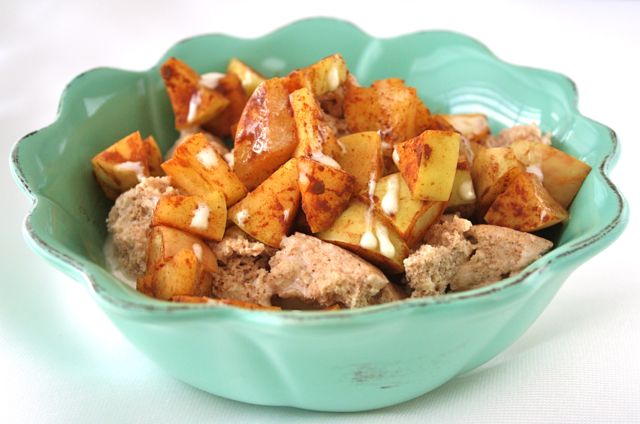 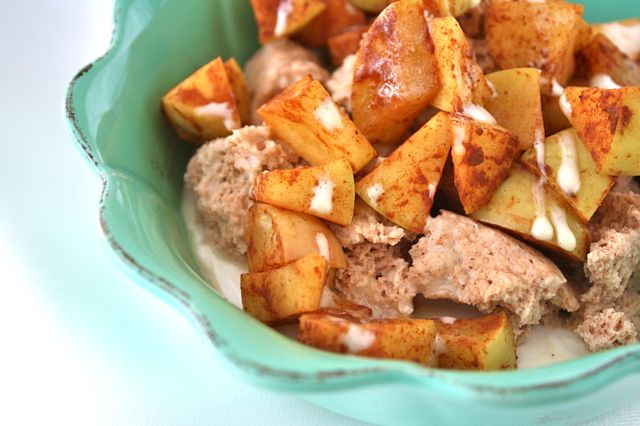 Lunch was put together in a hurry since I was running a bit late for work, but that doesn’t mean it was anything short of delicious… 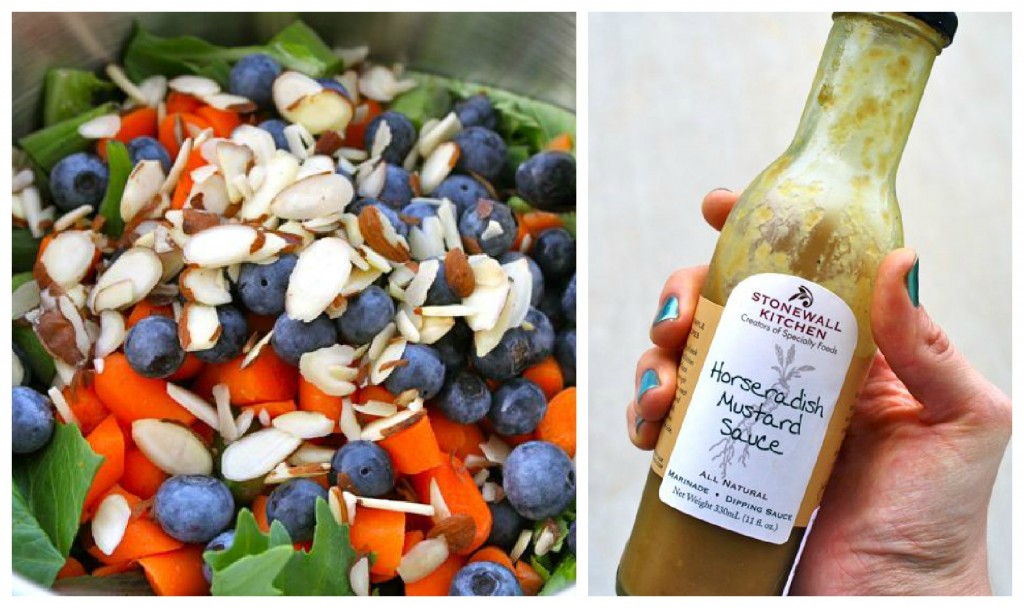 Especially after a drizzle of this mustard sauce!

Trust me on this one…blueberries and mustard…give them a chance!

A few hours later (getting into the 2am range just to explain), I got hungry for a snack and well, things got a little crazy! 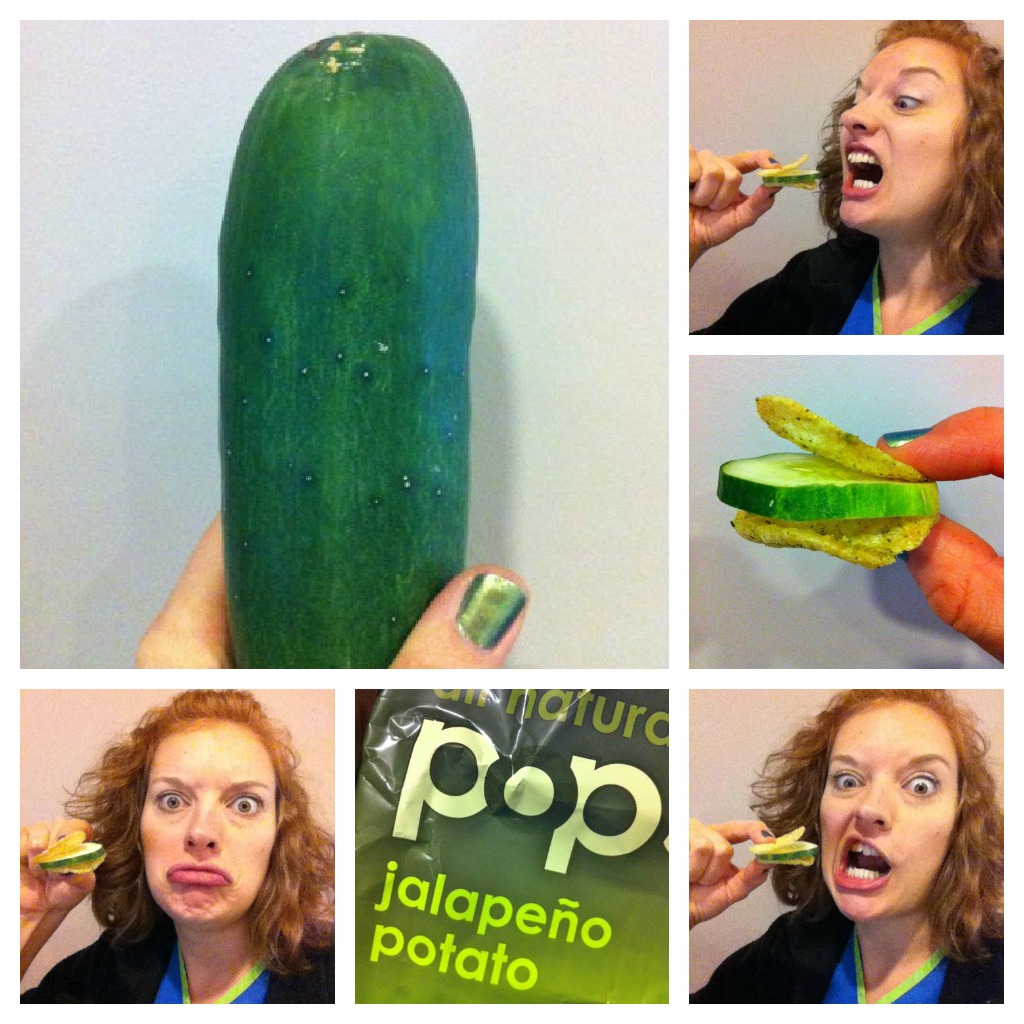 Jalapeno cuke chip sandwiches…just as good as their BBQ brothers! 😉

C’mon, I have to do SOMETHING to entertain myself!

My next snack was a little…ok, a LOT more normal… 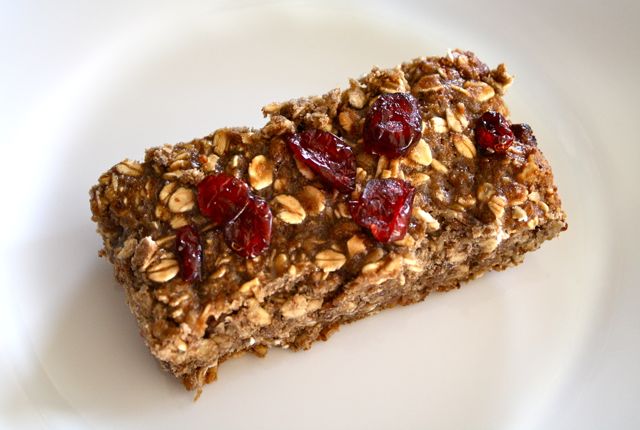 One of the last few of my Coconut Cranberry Protein Bars…it’s been over a week and they’re STILL just as tasty as the first day!

And just enough to fuel me through the last few hours of my night shift and then a bit of errand running.

Once I got home, I was starving, but I knew EXACTLY what I wanted!

If you follow me on Instagram, you may have spied my Mexican inspired breakfast pizza the other day…. 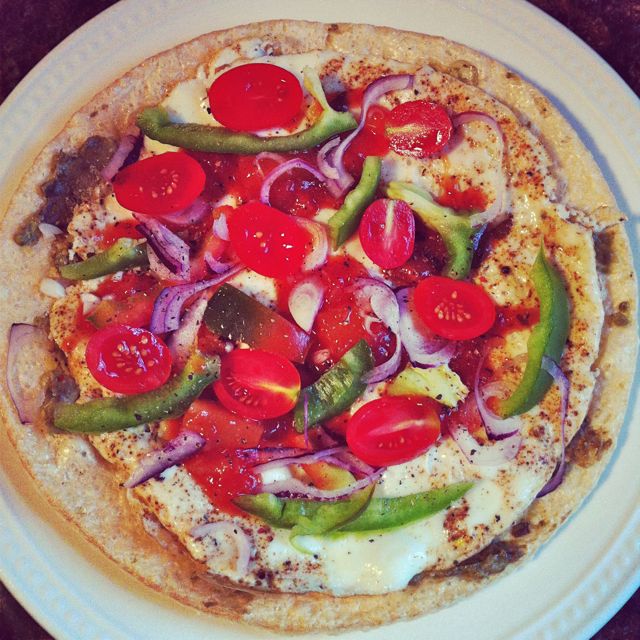 Well, for the second edition, I wanted to change things up a bit… 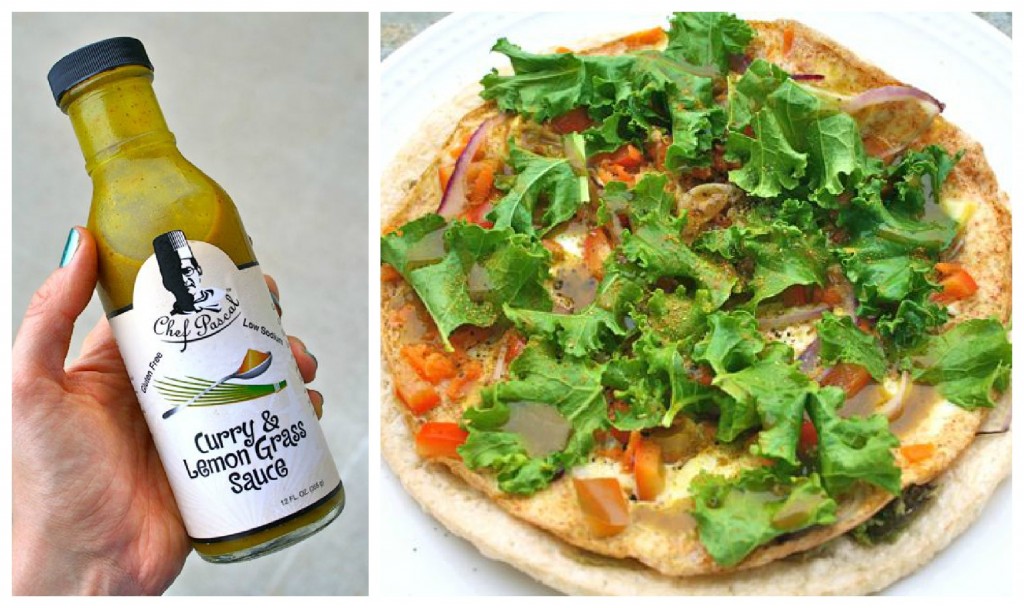 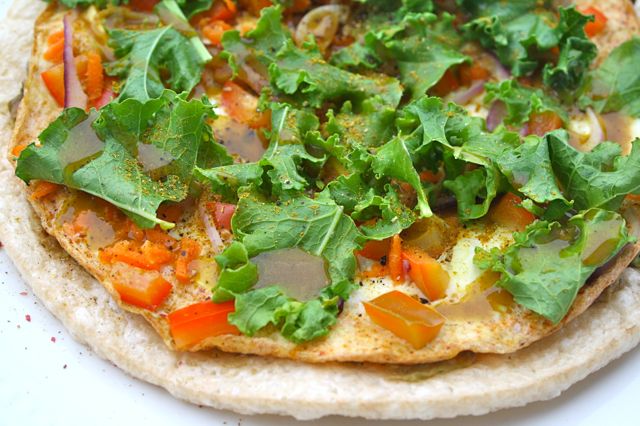 Notice anything different about the crust?

I followed my Egg White Breakfast Pizza recipe only instead of sauteing my veggies, I just let them steam on top of the egg whites. But here’s the kicker: instead of using a tortilla, I swapped in my favorite puffed wheat cakes! 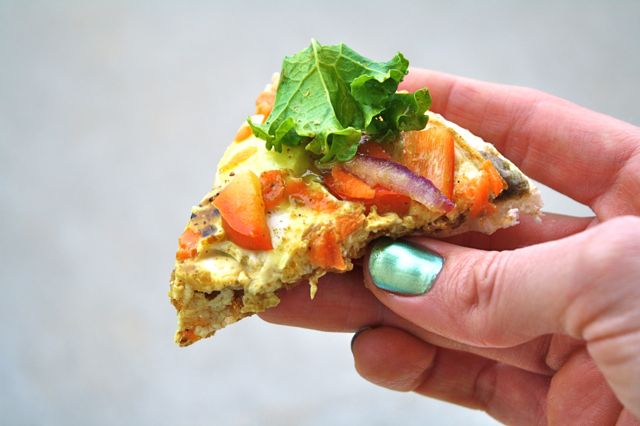 Brings a whole new meaning to “crispy crust” but the best part? It snaps, crackles, and pops once you put the warm egg whites on!

Takes me back to my Rice Krispie days!

Not too shabby for one day, huh? I used everything from my haul except the eggplant…which I have plans for, but more on that later! 😉

Do you have a farmer’s market in your area?

What is your favorite international cuisine to prepare at home?

This entry was posted in Breakfast, Entree, Snacks, What I Ate Wednesday and tagged pizza. Bookmark the permalink.