WIAW: The Best of Atlanta

Posted on February 6, 2013 by kissmybroccoli

Thank you all SO much for the sweet comments regarding my accident last week. I got the call from the mechanic today and Elvira should be fixed up and out of the shop by late next week! 😀

I think this calls for a bit of celebration!

And what better way to celebrate than with TONS of mouth-watering vacation
foodporn? 😉

After you get your drool on (you may want to go ahead and grab that bib now), head on over to Peas & Crayons and show our fabulous hostess, Jenn, a bit of love before checking out all the other fantastic link ups!

So when the man-friend suggested a trip to Atlanta to visit IKEA a few weeks ago, obviously I  said I’d be happy to go (especially since it was my first time!). After talking with Laura and making some plans, I knew for sure we’d encounter a fair share of deliciousness, but what I didn’t expect was to have to be rolled out of the city three days later!

It all started Friday morning when, on Laura’s request, the man-friend and I headed to Ria’s Bluebird for breakfast before heading off to frolic in furniture funland… 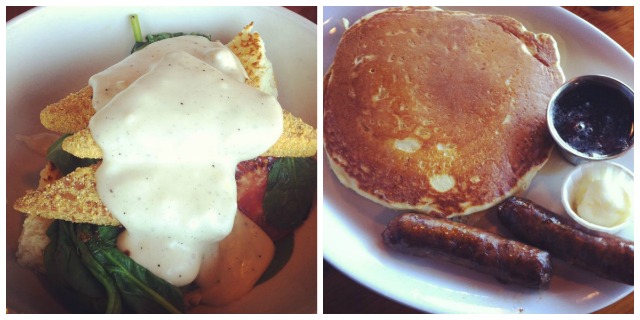 There was no doubt in my mind what I was ordering as soon as I spotted the Country Fried Tempeh and the man-friend instantly set his sights on the Buttermilk Pancakes with a side of Maple Sausage.

I did ninja a couple of bites off the man-friend’s plate and I have to say the pancakes were nice and fluffy (of course we ALL know mine are MUCH better), but the tempeh was definitely the breakfast winner! The texture was incredible…and combined with the peppery gravy, the warm grilled tomato slices, the sauteed spinach and the buttery biscuit that lie beneath, it was everything I could do not to plant my face in the bowl! 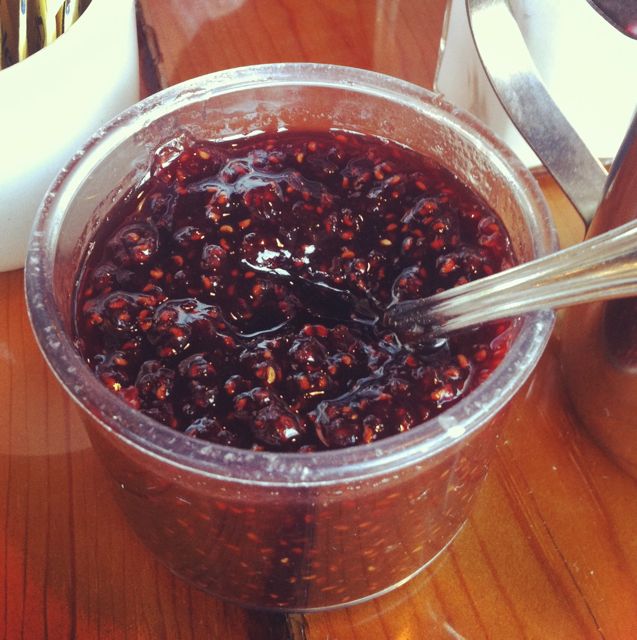 After a few bites, I added a bit of their DELICIOUS house-made raspberry jam and deemed it my sweet/savory masterpiece! 😀

FOUR hours, ONE dresser, and way too many food props later (pics to come!), the man-friend and I found ourselves staring at these beauties: 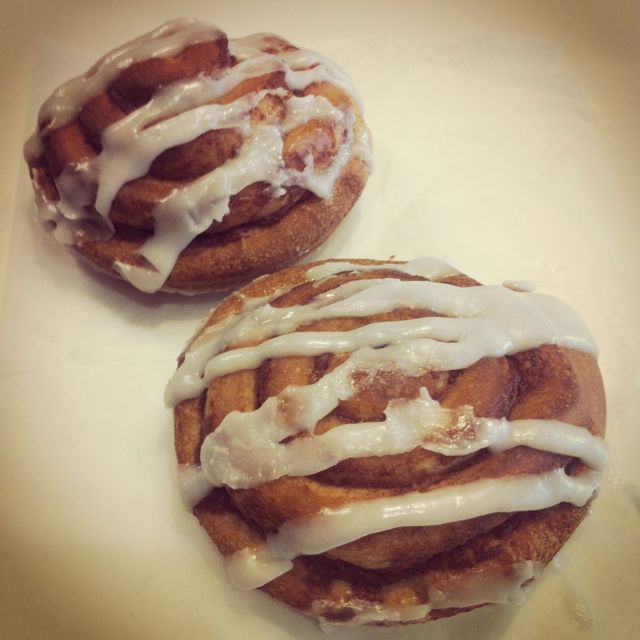 Yep, paired with some hot {decaf} coffee (perfect for dunkin’), that was what we called lunch! But boy were we glad that was all we had once dinnertime rolled around…

We met up with Laura for dinner at one of her favorite Atlanta restaurants, The Spence and were treated to quite a meal! Like true foodies, we decided to order several small plates to share instead of going with larger entrees which I was super excited about since there were so many dishes on my foodie bucket list! 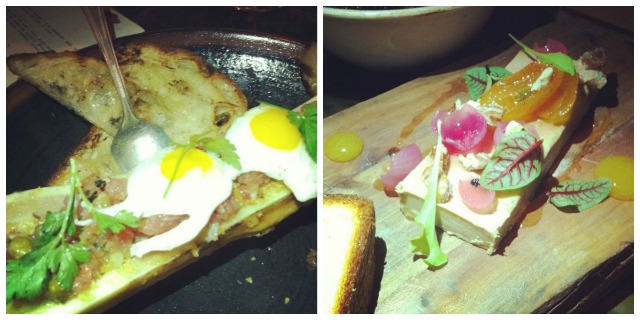 Laura wasn’t kidding when she referred to bone marrow as “meat butter”…it was warm and buttery without being greasy and the perfect match for the cool temperature of the tuna. I thought the quail eggs had a bit of a sweet taste to them and the smoked bread slices they served the dish with was phenomenal!

I wasn’t really a fan of the foie gras. I wasn’t sure what to expect as far as flavor…the creamy texture was nice (I actually thought it would be gritty), but I found that it had a bit of a tart/tangy aftertaste that I didn’t really like. 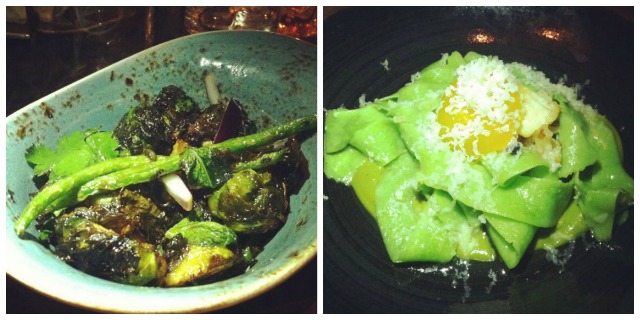 The brussels were absolutely heavenly…practically no need to chew they were so soft and as for the vinaigrette, I seriously wanted to pick up the bowl and drink it!

The broccoli pappardelle was fantastic…so soft, so smooth, so fresh! But really, how could anything topped with AGED CHEDDAR taste bad? 😉 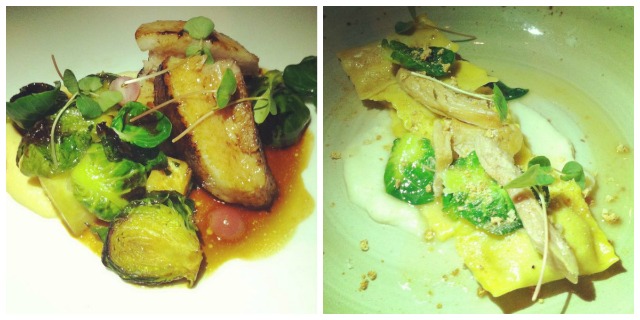 Unfortunately the pork belly wasn’t a table favorite. It was a bit fattier than it should have been, but I WILL say the meaty parts of it were incredibly juicy and smooth…like a perfectly slow-roasted pork shoulder.

The squash was my FAVORITE dish of the night…rich and creamy and served in a pool of what they called parsnip puree, but I like to think of it more as CRACK SAUCE…it was like liquid vegetable candy! 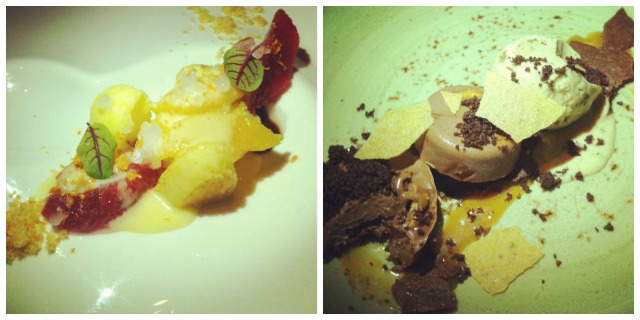 The orange cake was very light…perhaps a little too light to follow all the decadent dishes we had just finished, but unsurprisingly the chocolate dessert was the STAR of the show and I could seriously BATHE in that ice cream! 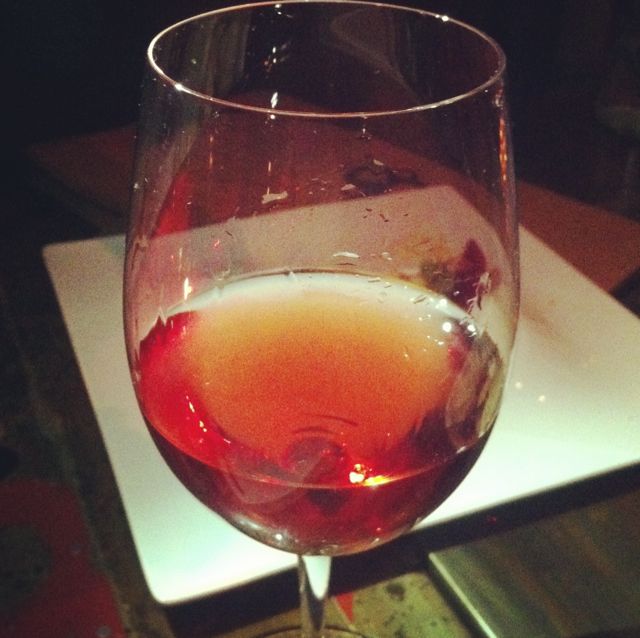 I washed down dessert with the first rose wine I’ve ever tried AND enjoyed…the perfect end to one incredible meal!

So I just realized I’m fast approaching 900 words and well, fantastic food like this deserves an appropriate amount of gushing over, SO I think I’m gonna have to post-pone Saturday’s foodie adventures for next week’s link up…

And if you can believe this, it gets EVEN BETTER!

What’s the best thing you ate over the weekend?

What are some items on your foodie bucket list?
An authentic Philly cheesesteak, Haloumi, plantains, a mimosa, and figgy pudding just to name a few!

This entry was posted in 100 Foods to Eat Before You Die, Restaurant Review, What I Ate Wednesday and tagged banana, chocolate, coffee, ice cream, jam, pancakes, spinach, tempeh, wine. Bookmark the permalink.

40 Responses to WIAW: The Best of Atlanta