What I Ate At The Beach!

Posted on September 4, 2013 by kissmybroccoli

Boy am I GLAD to hear you guys don’t hold grudges! Of course, I should’ve known I could win you over with cookies…I’ll be sure to keep a few extra in my pocket should I plan any further blogging indiscretions! 😉

So, while the man-friend and I were beaching it up last week, we made SURE to get our fill of as much fresh and local seafood as possible and since I want to make sure not to “forget” anything, I’m not wasting ANY more time… 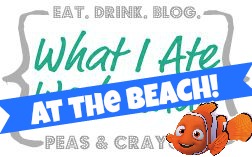 I may or may not have found Nemo…and eaten him! 😯

The first place we went to was called The Boatyard. It was a nice place…great outdoor seating…right on the marina…live music. My only complaint was that it took FOREVER to get our meal and it was dark by the time the food rolled out so no pics! You’re just gonna have to picture this one…

Gooey melty brie with apples and raisins served with toasty bread for starters and then a perfectly grilled swordfish fillet with chimichurri sauce, over a bed of grilled asparagus and mixed squash…oh, and I got some fried plantains on the side (first time trying them…not bad, not bad!)

On Sunday night, we went to Schooner’s Beach Bar and I ordered my “obnoxious” yet delicious seared tuna salad. Let’s see that one again… 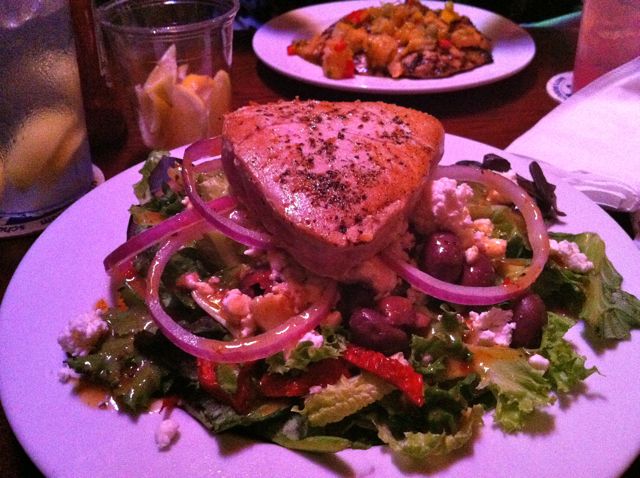 Oh and that plate in the background? That would be my friend’s Caribbean Jerk Chicken topped with a tropical fruit compote. I stole a bite. It was delicious! 😉

Monday evening, we just HAD to go to Capt. Anderson’s Restaurant after our friends went on and on about delicious steak and seafood dishes AND the house-made hush puppies! 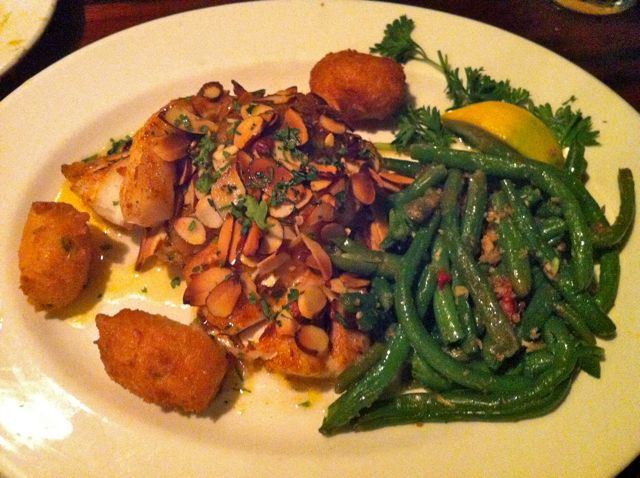 I ordered the crab-stuffed grouper with toasted almonds, bacon-y green beans, and of course hush puppies! Verdict? Omg, you guys, it was seriously one of those moments where you take a bite and you forget to breathe for a couple of seconds…and the hush puppies were by far the BEST I’ve ever tasted!

And would you take a look at this dessert cart?! 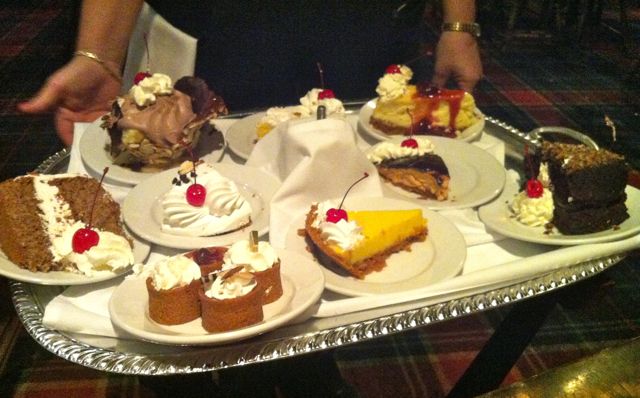 I was MUCH too full after practically licking my plate clean to even THINK about dessert, but our friends ordered the honey-sweetened caramel pecan cake (far left) and the torte sampler (in front of the pecan cake) and were more than happy with their picks.

Before parting ways on Tuesday afternoon, we headed over to Pineapple Willy’s for lunch… 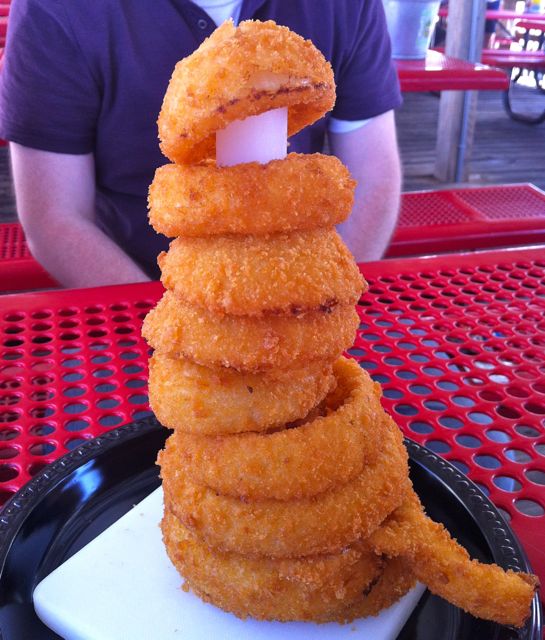 There was a tower of onion rings involved within the first few minutes of sitting…one of which had a tail…all of which were delicious! And that’s saying something since I tend to be pretty picky when it comes to fried sides! 😉 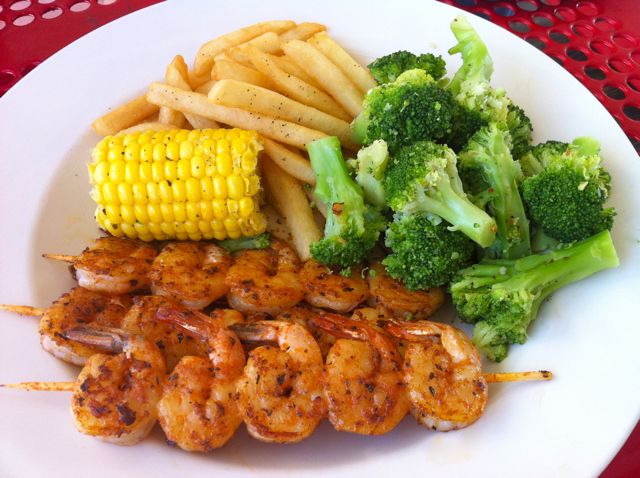 I went with the grilled shrimp plate and thankfully added a side of steamed broccoli because the fries and basil corn on the cob ended up being pretty disappointing, but the shrimp was amazing!

And so was the man-friend’s fried mahi-mahi… 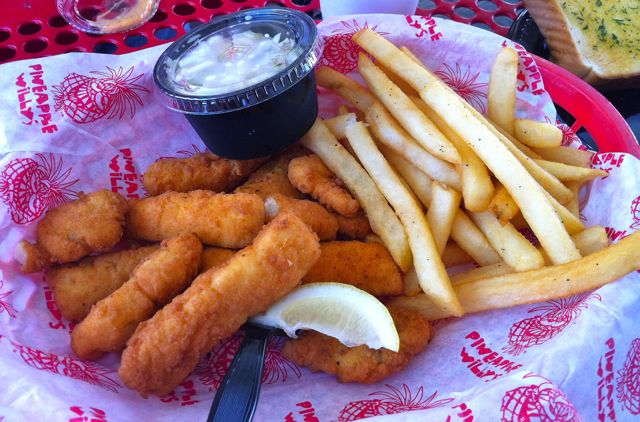 You see that garlic toast in the upper right hand corner? That came with MY plate…I figured it worked out to an even two (and a half) fish stick trade! 😉

Later that night, once the man-friend and I made it to Gulf Shores, we divied up all the leftovers I’d been collecting over the last few days and made some pretty kick ass salads… 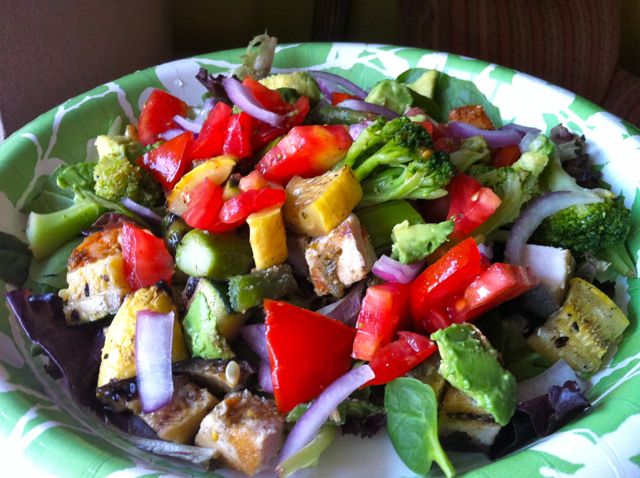 Lettuce, tomato, red onion, avocado, swordfish and grilled veggies from our first night and the shrimp and broccoli I didn’t finish at lunch. Now I know a thing or two when it comes to salads, but I have to say there is just something about throwing random leftovers on a pile of greens and slapping some dressing on it that just works!

After our shopping extravaganza on Wednesday, some alligators chased the man-friend and I all the way to The Original Oyster House. Once we were there, we felt it was only right to get some lunch! 😉 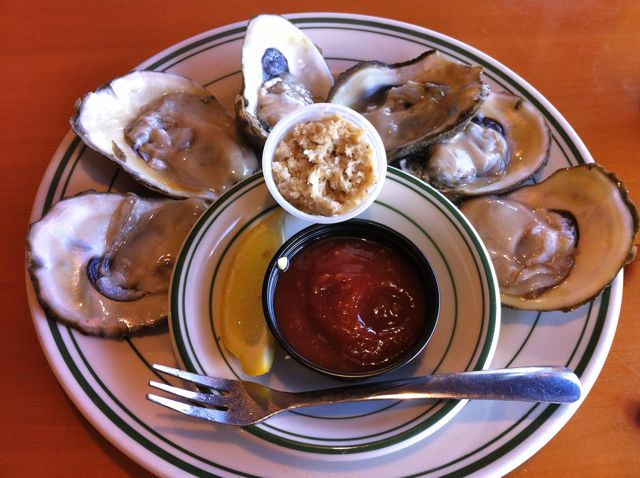 Oysters on the half-shell…all for me too since the man-friend chickened out on me once they got to the table! Lol 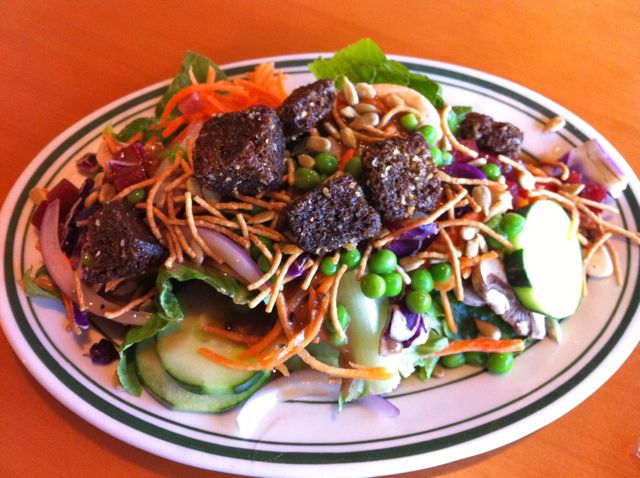 A salad bar LOAD UP! 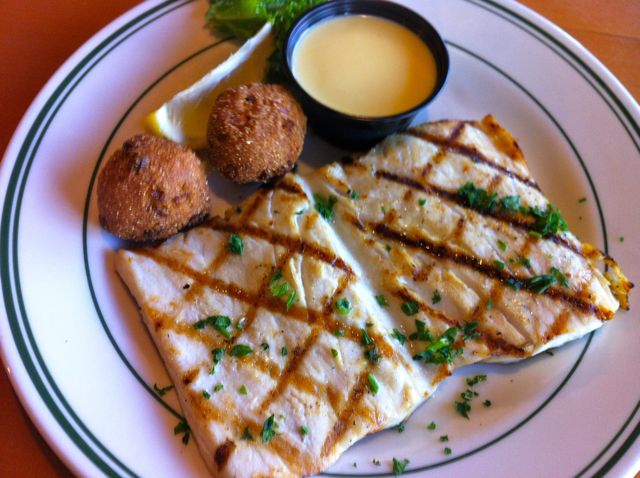 Confession: I was full after the salad! I ended up taking my entire plate back to the hotel with us (where another leftover salad ensued). But let me just say, those greens were fan-freakin’-TASTIC! I can be a bit of a snob when it comes to good greens, but this place totally nailed it…not too sweet, not to salty, and not all nasty and greasy! 😀

On Thursday, I took a recommendation from a reader and directed the man-friend to The Tin Top Oyster Bar for lunch… 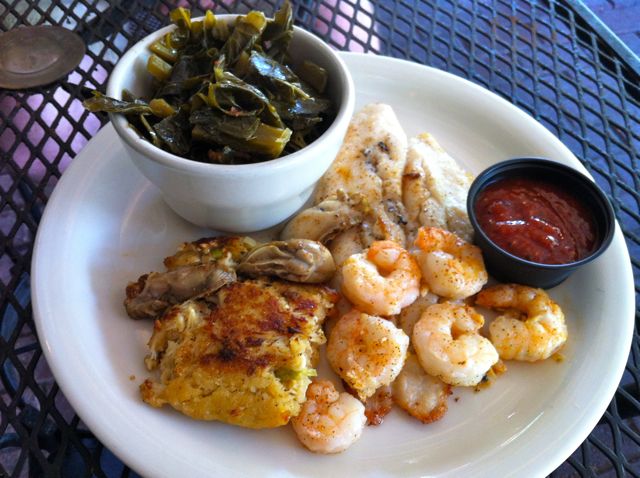 I ordered the seafood platter: broiled grouper, shrimp, oysters, and half a crab cake with turnip greens annnnnnd…

The crab cake was a little dry, but the rest of the fish was delicious. Sadly, the turnip greens snob came out in me though…this bowl tasted like it was cooked with a CUP of sugar! Luckily my other side saved the day…seriously, it’s been FOREVER since I’ve had mashed potatoes and gravy…YUM!

On our last night in the gulf, believe it or not, the man-friend and I were seafooded OUT! After a quick Yelp search, we stumbled over Rotolo’s Pizzeria…and well, you guys KNOW how much we love a good pie! 😉 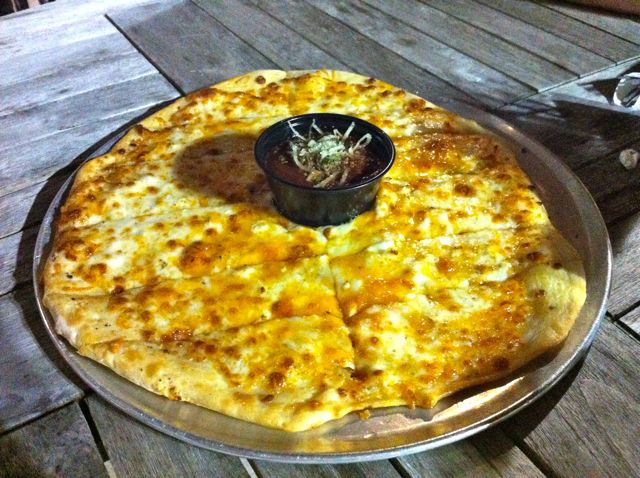 We started with some garlic cheesy bread (garlic butter, cheddar, mozzarella, parmesan, and FETA!!) with house-made marinara for dipping. Then it was time for our personal-sized pies! The man-friend went with his favorite of pepperoni and mushroom, but I decided to get a little adventurous and with the Sicilian… 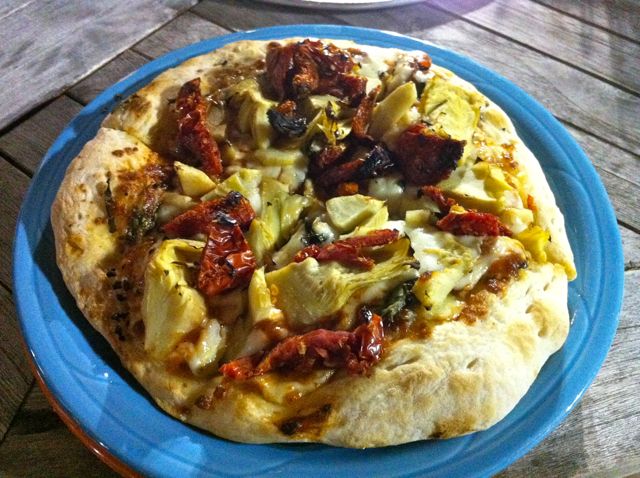 With marinara instead of the olive oil base because their sauce is
OUT OF THIS WORLLLLLLD! 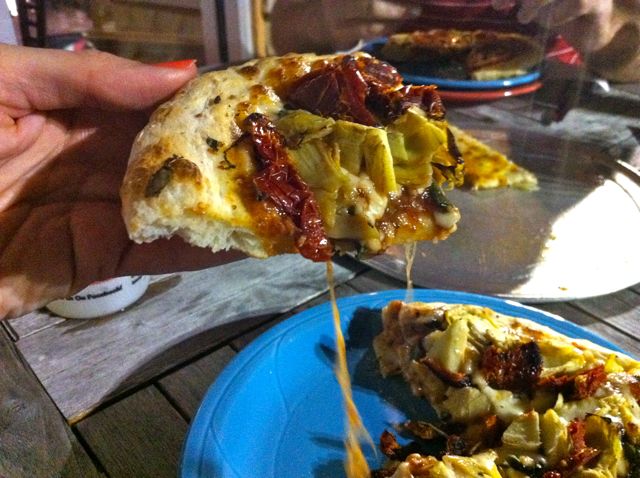 And the pizza as a whole was perfect with a capital P! Perfectly stringy melty cheese, soft yet crisp dough, and the combination of sun-dried tomatoes, artichokes, and basil? Well, everyone knows that’s a winner! 😀

And THAT is 1000 words of seafood-filled deliciousness! Over and OUT!

What is your FAVORITE seafood dish?

Is there anything out there that you consider yourself “snobby” for?

This entry was posted in Restaurant Review, What I Ate Wednesday and tagged Florida, Gulf Shores, pizza, seafood, vacation. Bookmark the permalink.

35 Responses to What I Ate At The Beach!