Posted on January 2, 2013 by kissmybroccoli

I hope you all had a FABULOUS New Year’s Eve and a great start to 2013!

I decided to take a small break from the blog for the last few days, but there was
NO WAY I was going to miss out on my FAVORITE day of the week, especially since I have a good amount of food-porn to share with you guys from my last weekend in 2012! 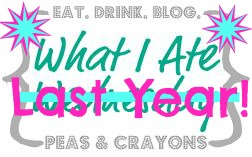 Be sure to pay Miss Jenn a visit over at Peas & Crayons and check out all the other delicious looking link ups for the first week of the new year!

I spent most of this weekend with the man-friend and while my appetite was STILL a bit lost, about mid-way through the weekend, I suddenly found it again…

All the more reason to celebrate, right? 😉

On Friday night, we went to a restaurant called The Looking Glass. It’s what I like to think of as one of the “nicer” places to eat here in Clarksville. They usually have a pretty good variety on the menu and they just recently started having live music! Unfortunately, this night was not one of my best experiences… 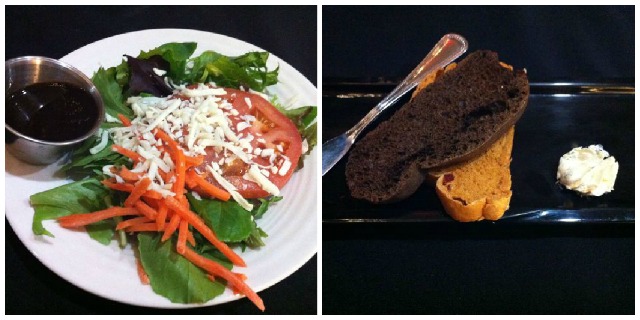 To start, we each had a salad and a plate of bread with herbed butter
A pretty average house salad, but the warm bread was delicious…the orange-colored slice was a sun-dried tomato and was probably the best part of the meal!

For an entree, the man-friend ordered the lasagna: 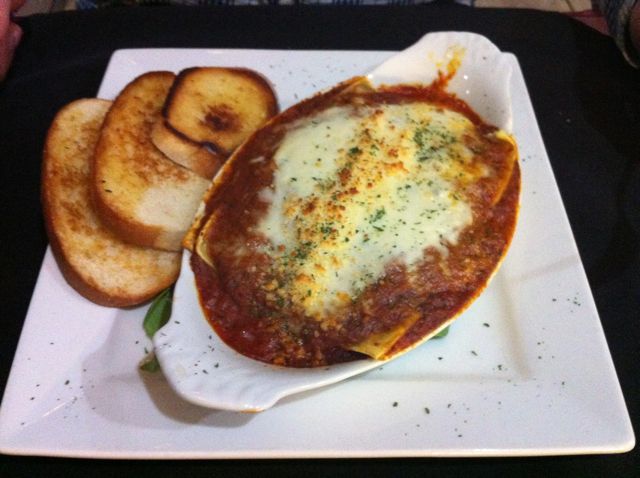 A bit disappointing since the menu described it as having meat AND seasonal vegetables, but well, at least they didn’t forget the cheese? 😉

I decided on the “Vegetarian” Diablo Penne since I still wasn’t sure about my appetite and really, I just wanted some warm vegetables… 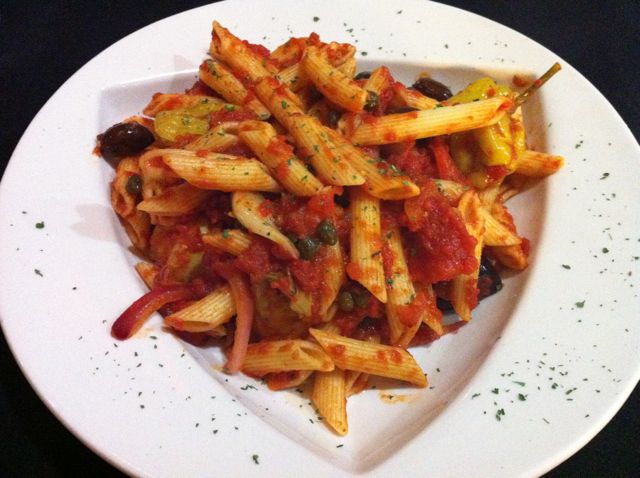 Too bad there wasn’t any!

I counted three artichoke heart quarters, a couple of pepperoncinis, and a few strips of onion. What they did NOT mention on the menu was the fact that it would come out with half a can of Kalamata olives and capers in it. Now don’t get me wrong, I love me some olives, but I was not really in the mood for anything salty that night…and with the capers on top of it, I swear it was like licking a SALT BLOCK!

Sadly, I had no other choice but to ask for another dish, so I went with something a tried and true dish: 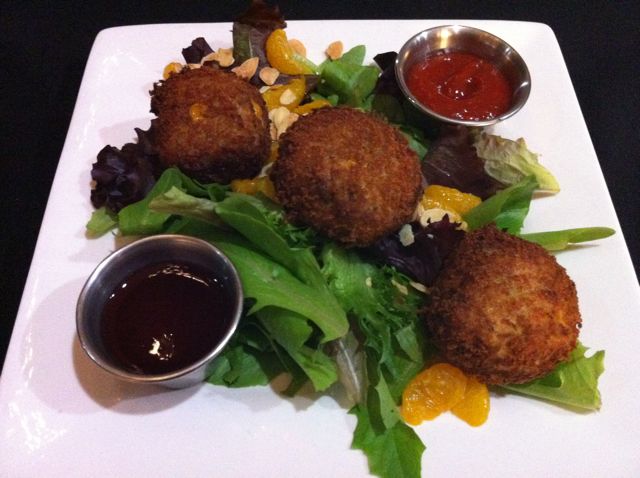 Crab cake salad with Mandarin oranges and toasted almonds
Served with a vinaigrette dressing and cocktail sauce….soooo MUCH BETTER!

The next morning, I whipped up a batch of Snickerdoodle Pancakes for the man-friend: 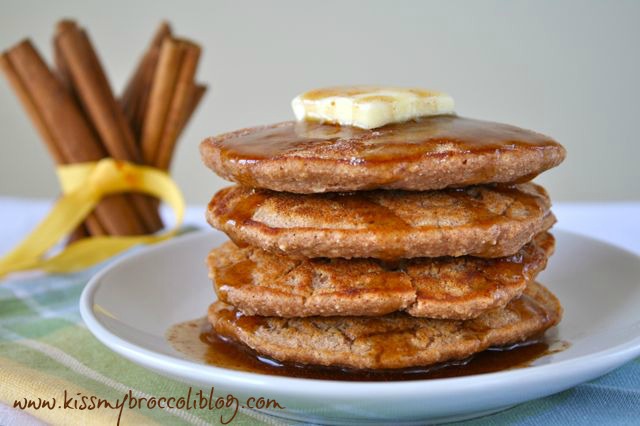 And some Detox Pancakes for myself: 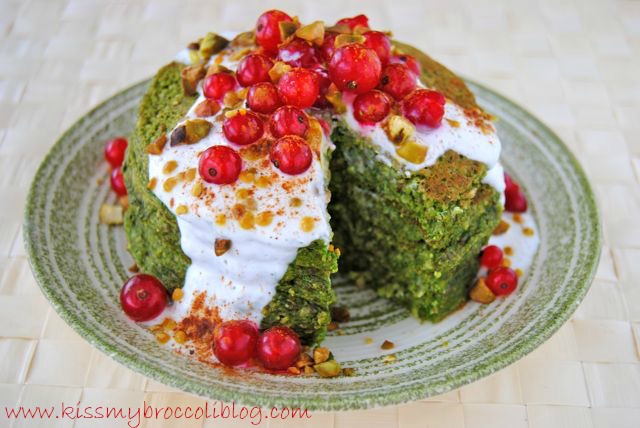 My third batch of the week and I could STILL eat them again!

We got together in Nashville on Saturday night, but since it was a bit late and most places had at LEAST a 45 minute wait, we went to a restaurant that is now quickly becoming my favorite place to eat, Athens Family Restaurant.

On the outside, it looks like nothing more than a little mom and pop diner, but HOLY COW do they have some amazing food! They serve Greek and American dishes, breakfast around the clock, and… 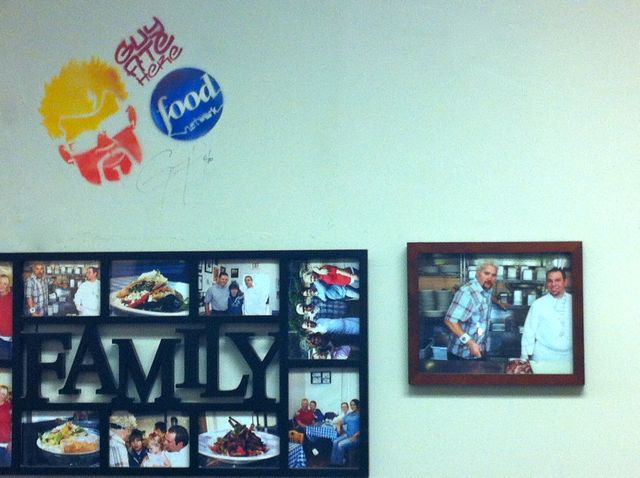 They were even featured on Triple D with Guy Fieri!

So far, we’ve been twice, but last time I failed in the food blogger department and didn’t take any pictures of my appetizer trio of hummus, Taziki, and Melitzanosalata (eggplant mousse <- to.die.FOR!) so this time, I made sure to document…

We started with a hummus platter and warm pita bread: 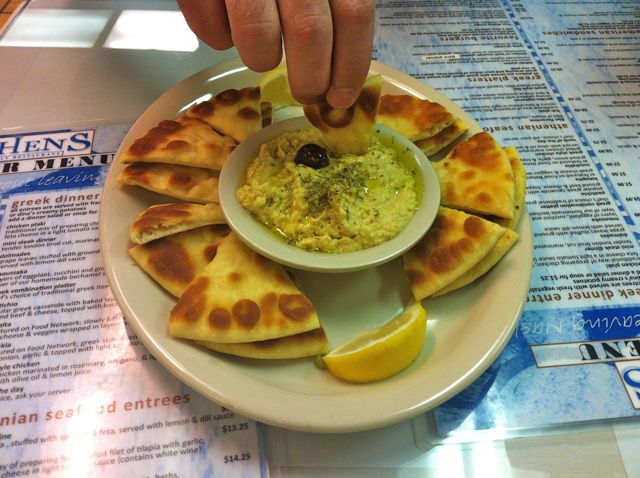 The man-friend ordered a trio platter of Greek dishes: 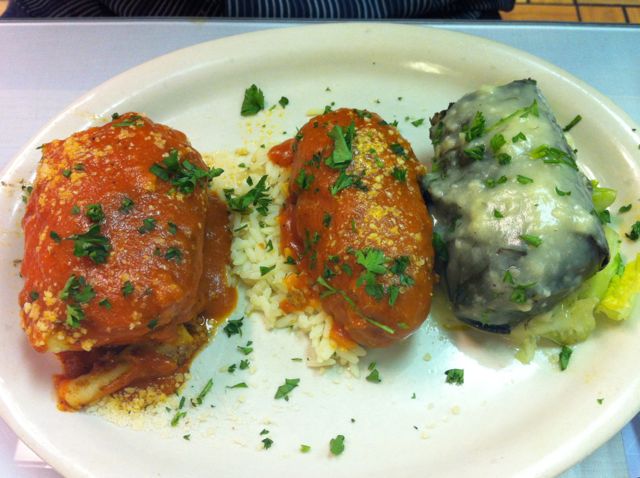 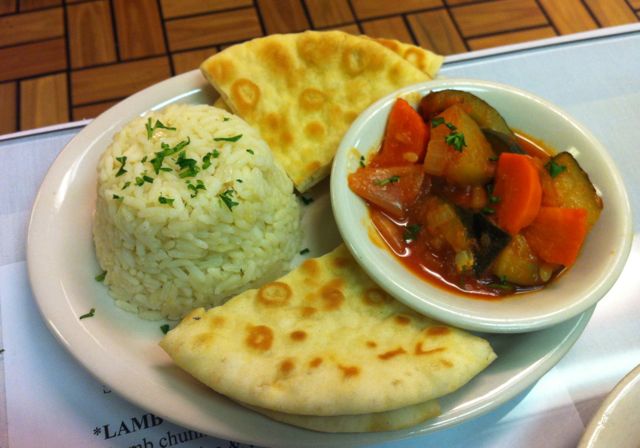 With rice pilaf, pita, and mixed veggies on the side.

Oh yeah, they made sure he did not leave hungry! And can you believe all that was only $12.95?!

Though I managed to sneak little “ninja bites” of everything off of his plates (LOVED the Suzukakia and the veggies), my entree was by far my favorite: 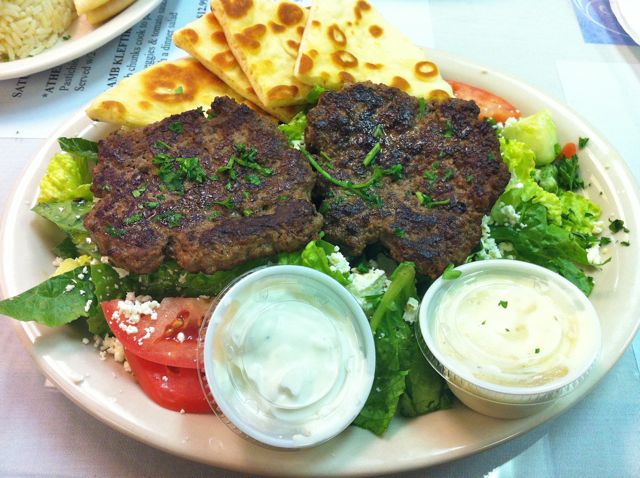 And under all that deliciousness is where I finally found my appetite! I only managed to eat half, but you better believe the rest was packed up and eaten for lunch later in the weekend! 😉

Even though I really wouldn’t have minded going back for breakfast the next day (seriously, I saw someone order pancakes that were bigger than my head!), instead we tried a new-to-me place called BrickTops 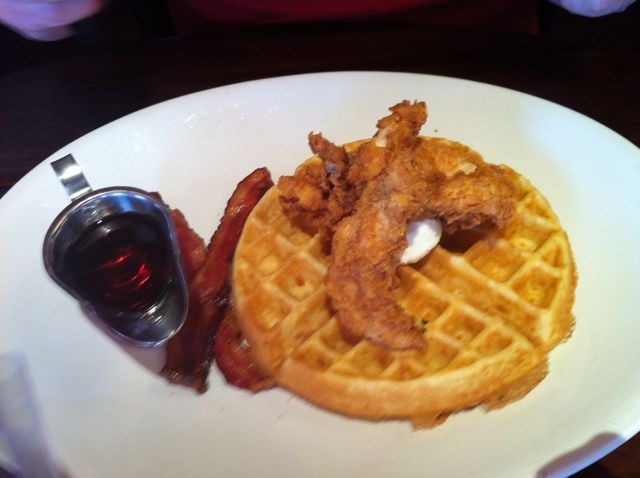 The man-friend ordered the (blurry) Chicken & Waffles (which were made with malted milk and were amazing!)

I wasn’t sure exactly what I felt like eating that morning having just found my appetite, but as soon as I spied the section of eggs Benedict, I KNEW I had to give them a try!

My very FIRST crab eggs Benedict and the BEST oven-roasted potatoes I’ve ever had in my life!

Ok, so I may be like the worst foodie ever by saying this, but what is all the hype with hollandaise sauce? I thought it tasted good, but really would have been just as happy without it (mmm, runny yolk)!

After breakfast, we walked across the parking lot to Whole Foods and looked around. I thought for sure I was too full to even CONSIDER buying anything, until I saw this: 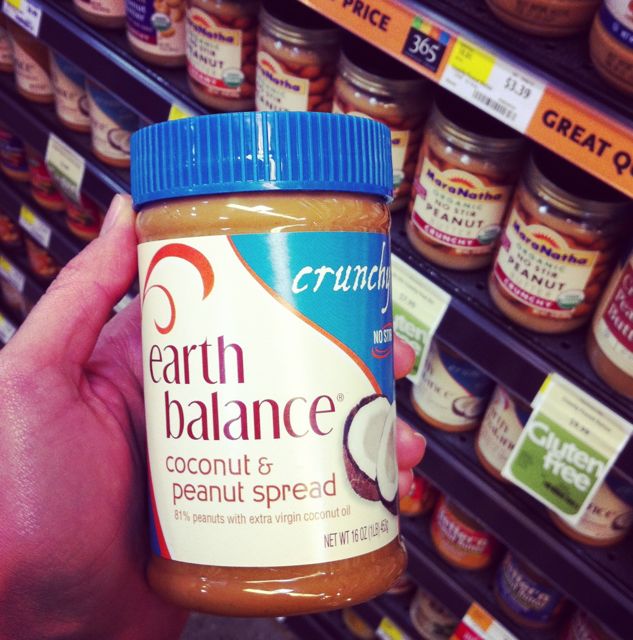 With all the eating out we’d been doing, it finally started to catch up with me by midday so for lunch we kept it simple and went with homemade salads: 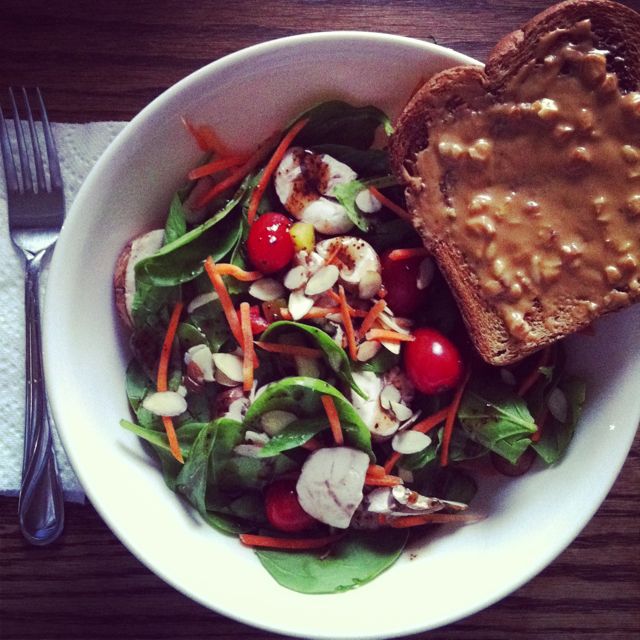 I had mine with a slice of toast smeared with my new coconut peanut butter while the man-friend whipped up a turkey and avocado sandwich for himself.

And for dinner that night, amid a Netflix-watching marathon, I introduced the man-friend to “blogger oatmeal”… 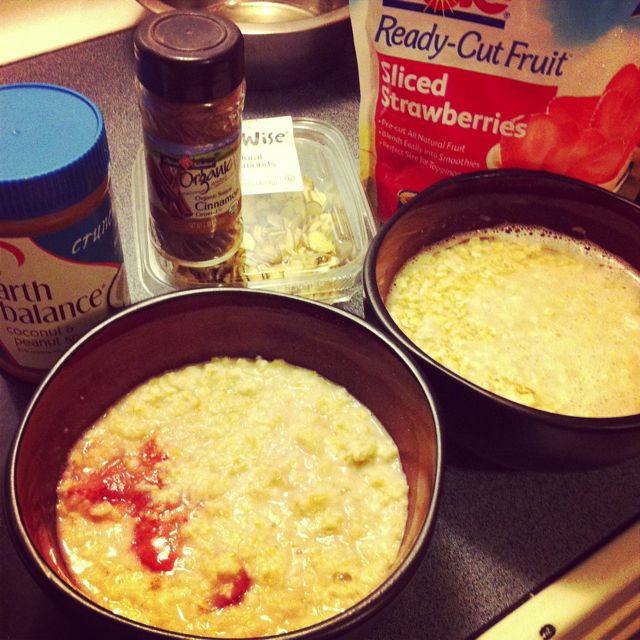 You should have seen the look on his face once I opened his eyes to the idea of adding peanut butter! Lord, if I showed him KERF’s oatmeal page, I’m sure his head would explode! Lol

Have you ever had eggs Benedict? Are you a fan of hollandaise?