Oh my gosh you guys…

So, I just got back from my first adventure in babysitting in over TEN years…and it was so much fun!

Wasn’t I just talking about being a little low on the fund-age recently? Well, I guess what they say is true…things all work out in the end. Some friends of mine called me up the other day and asked if I would be willing watch their boys for the next few Wednesdays.

Knowing that they are some of the best behaved children I’ve ever seen (the exact OPPOSITE of the examples you see in your local grocery store), I happily agreed! 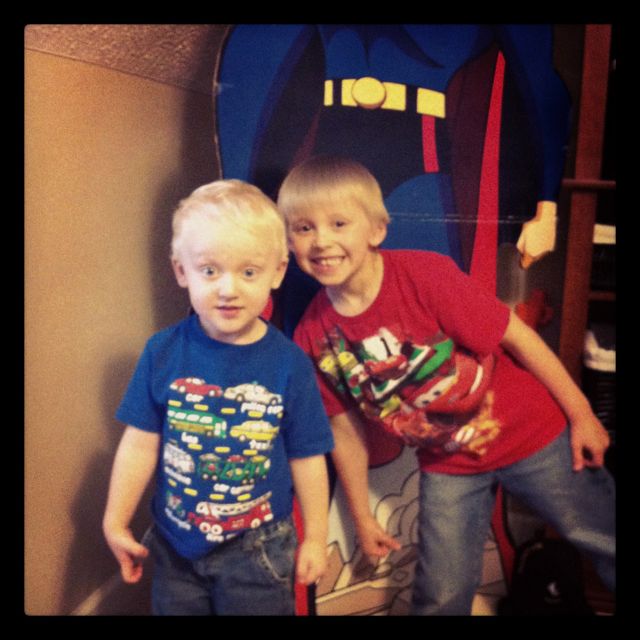 I couldn’t figure out what I wanted to call them for the blog…Thing 1 and Thing 2 just wasn’t enough to portray their personalities…plus I may not know anything about kids, but calling them “things” just seems a little off 😛

And believe me, Re-Pete lives up to his name…it’s so cute how he mimics just about everything his brother does!

We started the evening watching a show on the Disney Channel called Kickin’ It…and I’m ashamed to admit I actually found myself asking Pete questions about it as I got sucked in!

After the episode ended, and I was left with only MORE questions about the fate of the adolescent characters with questionable karate skills, we headed upstairs to play. I was introduced to just about every superhero/action figure known to man before Pete asked the golden question:

“Do you want to see my Legos?”

Um, does T-Rex want someone to scratch his back??

OF COURSE I WANT TO SEE YOUR LEGOS! 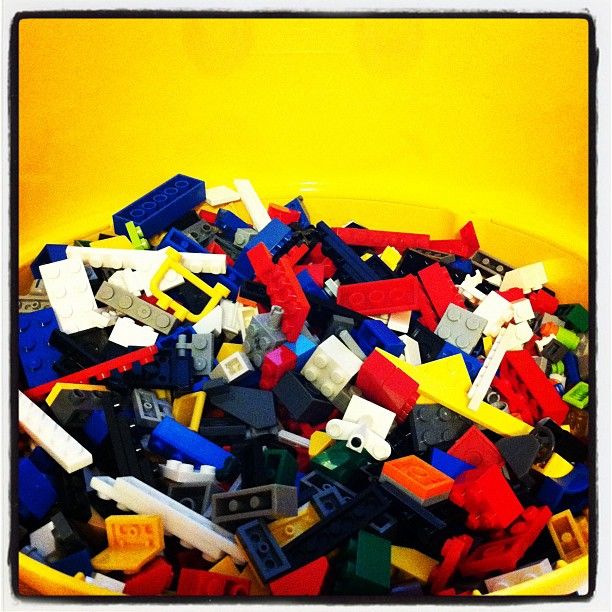 And see I most certainly did!

Then I realized the boys were looking at me like a weirdo for taking pictures of their Legos, so I cleverly devised a  game…Let’s create Lego men and then take pictures of our favorites!

Which was quickly answered with:

I couldn’t help but smile to myself after that. Leave it to a six year old to boost my self-esteem! 😉 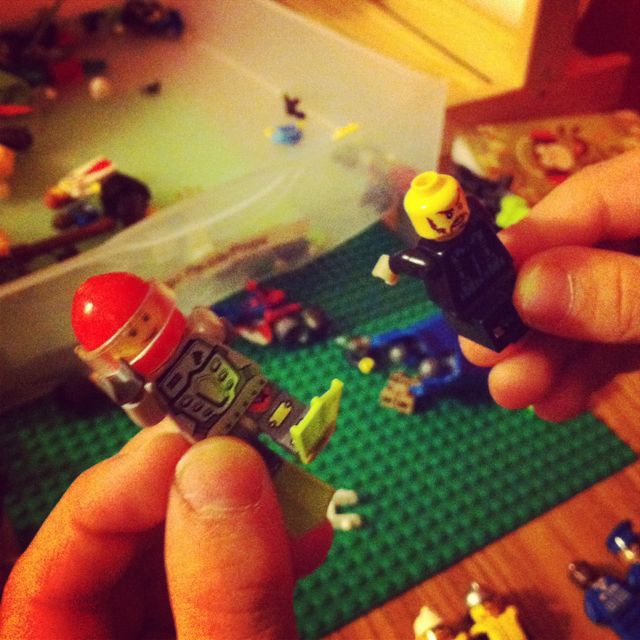 Pete’s Scuba Man and Ninja “Dude”…with some seriously mean chops, I might add! 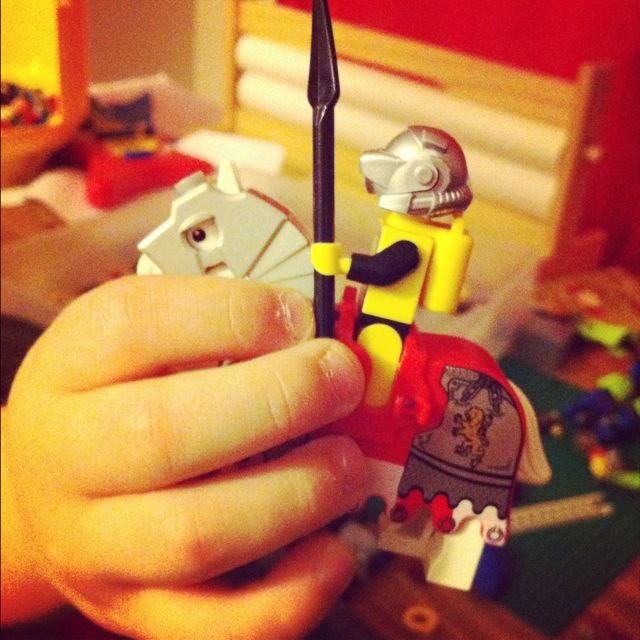 Re-Pete’s knight on horseback who also moonlights as an undercover Navy Seal
See the little yellow thing strapped to his back?
…that would be an oxygen tank! 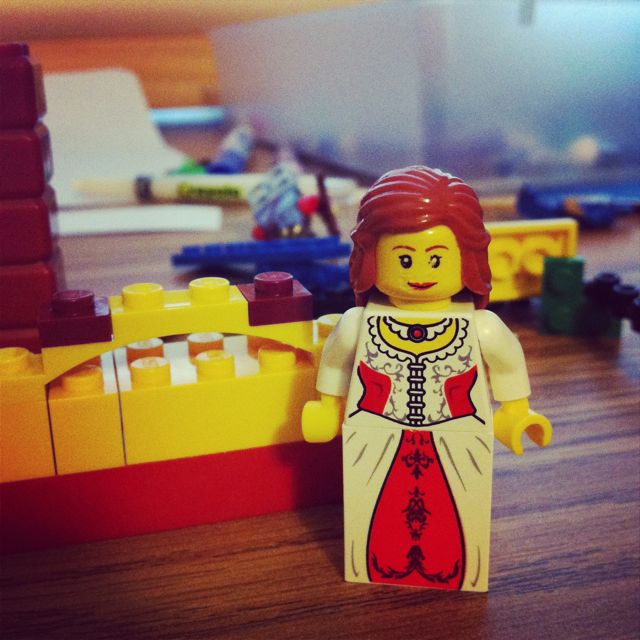 After Lego time, it was dinner time for me and snack time for the kiddos. I had some sort of hodge-podge I threw together before running out the door (chicken, cottage cheese, pinto beans, green beans, and asparagus topped with nooch…totally not photo-worthy) while the boys enjoyed a little juice and these: 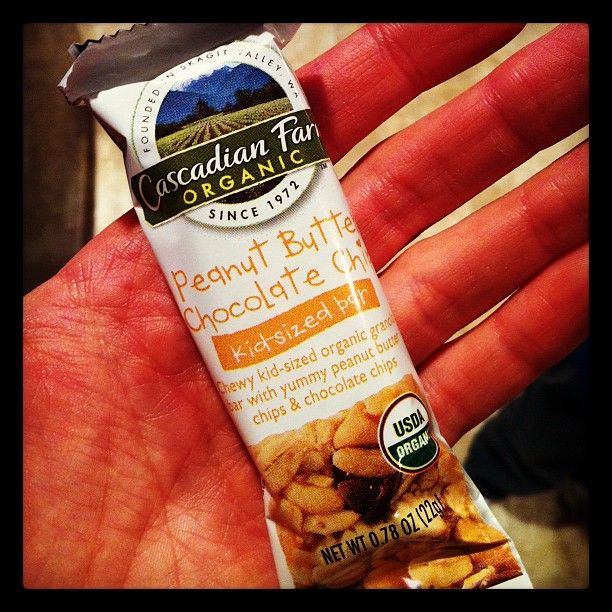 Omg, are these not the cutest things ever?!

Sorry, but I have an infatuation with all things “mini”…Janetha would understand!

And then the REAL fun began…wanna see what happens when you give a kid a granola bar at 7pm? 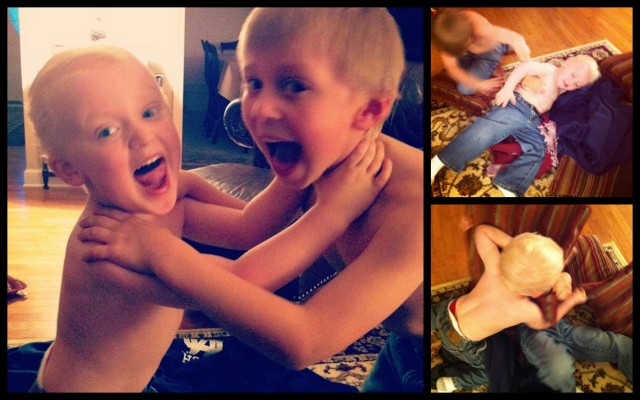 While Pete and Re-Pete transformed themselves into crazed WWF fighters, I assumed my role as referee/photo-journalist

If I had to pick a winner, I’d have to say Re-Pete pulled some pretty courageous moves…the time he catapulted himself off the kitchen table and landed a perfect 450 splash was epic…I joke, I joke…

After I made sure the glue had dried from patching their limbs back together, it was
bath time! 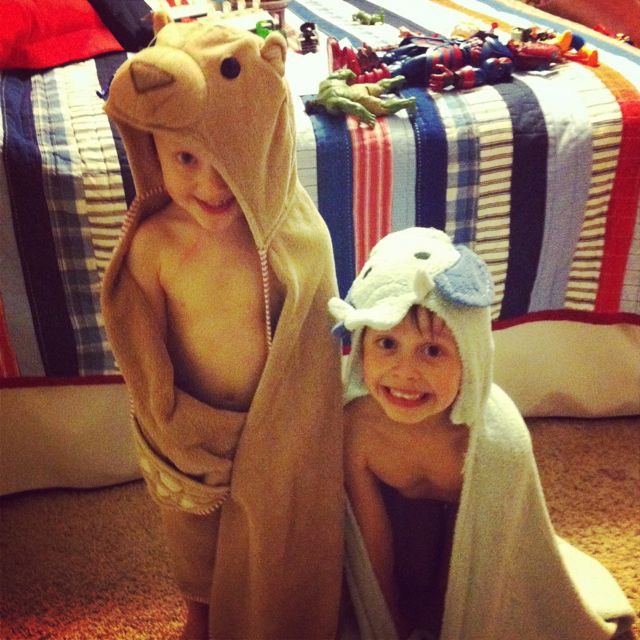 They were so good about getting straight in the tub when I asked and helping me pick the right soap…I may have let a few “tidal wave” splashes go unnoticed.

And then I helped Re-Pete into his Superman PJ’s which were too cute…and even comes with a velcro cape for the back!

Then we all headed back to Lego Town until the parentals got home and it was time for story time.

Where you as Lego-obsessed as I was as a child?
The only thing that could’ve been better is if they could’ve matched the sizes of Legos to Barbies…ah, that would’ve been Heaven!

Do you have/want children?
This is something I go back and forth on, but honestly, I could see myself having one or two one day…especially after spending the night with these munchkins!

This entry was posted in Adventures in Babysitting and tagged fun, kids, mini, toys. Bookmark the permalink.

14 Responses to A Wacky Wednesday