Title to be read as follows: 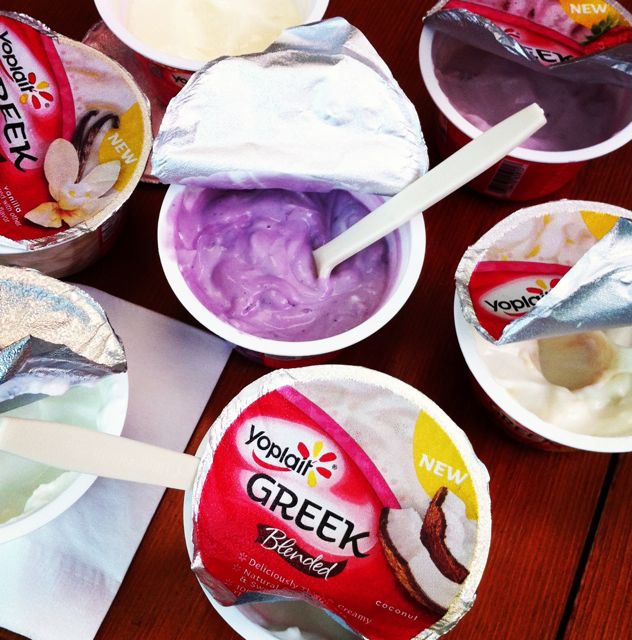 I only WISH I could take credit for such incredible wit, but alas, I owe it all to Aly! 😉

And a PLAY day it was!

From the tour of the General Mills headquarters to the exploring of the photography prop closet…from the sampling of Yoplait’s new blended Greek to the homemade fro-yo bar complete with every topping imagineable…from the structured interview scenes to the moment they let me run WILD in the Betty Crocker kitchen…I have to say, by the end of the day, 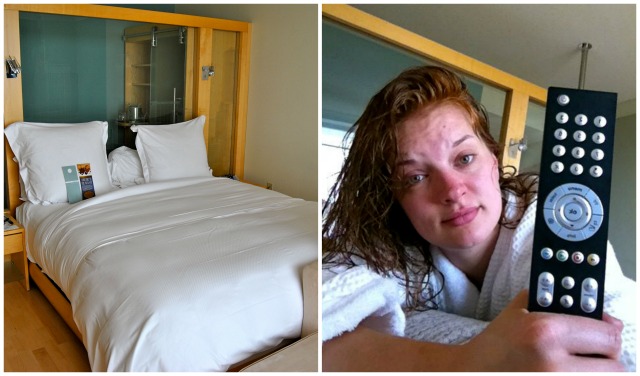 …Thoroughly bubble-bathed, wrapped in a fluffy robe, propped up by feather pillows and ready to spend my night with The Food Network!

But as tired as I was, I’d do it again in a HEARTBEAT! So surely, you’ll allow me a minute (or quite a few of them, depending on how fast you read) to relive my Christmas morning…I mean, I’m sure you guys are at least a LITTLE curious about that mind-boggling fro-yo bar, right? 😉 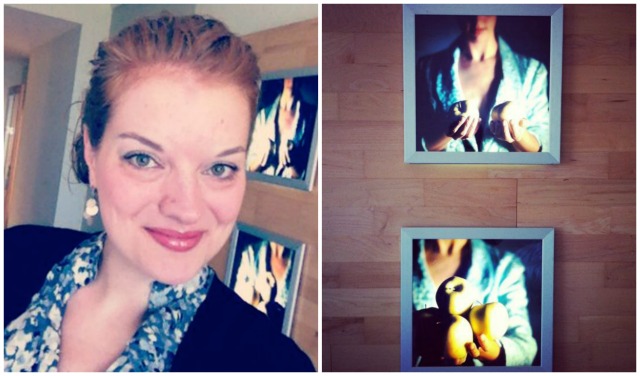 The morning started early…I woke up at 7am after about four hours of sleep (damn you night shift!), took a pic of my pretty lil’ self (and the modest award goes too…), and stood to ponder the hotel’s choice in artwork (obviously a male designer…never satisfied with just a handful! ;)) before heading downstairs to be driven to headquarters.

Shortly after arriving, we met with the CEO of Yoplait and toured several of the floors learning more about the history of the General Mills division. 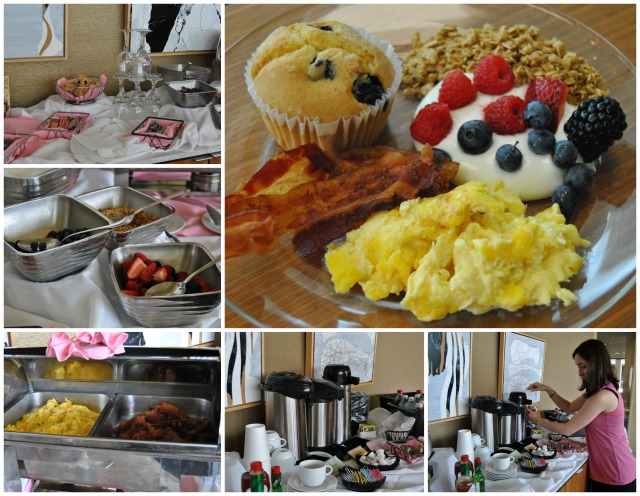 After our tour, we were presented with a buffet-style breakfast…fresh blueberry muffins, yogurt with berries, and crunchy granola, eggs, crispy bacon, and COFFEEEEEEEE…which you know, was WORSHIPPED…oh and look, Brianne decided to match the decor! 😉

As we nibbled on our plates, the camera crew geared up to tape our meetings with some of the behind-the-scenes peeps at Yoplait…VIPS if you will since they were all responsible for the launch of the newest yogurt line.

And speaking of yogurt…afterwards, it was time for some SAMPLING! 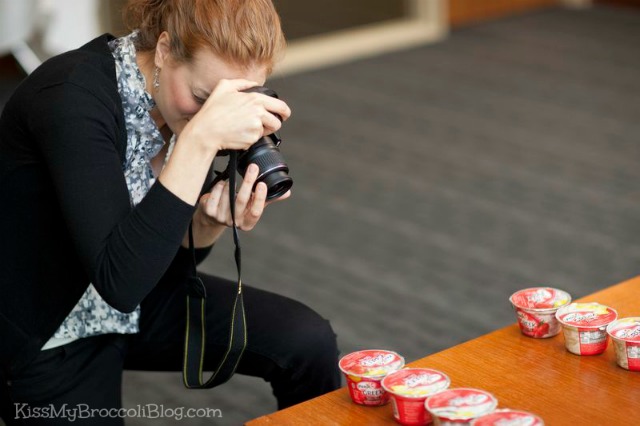 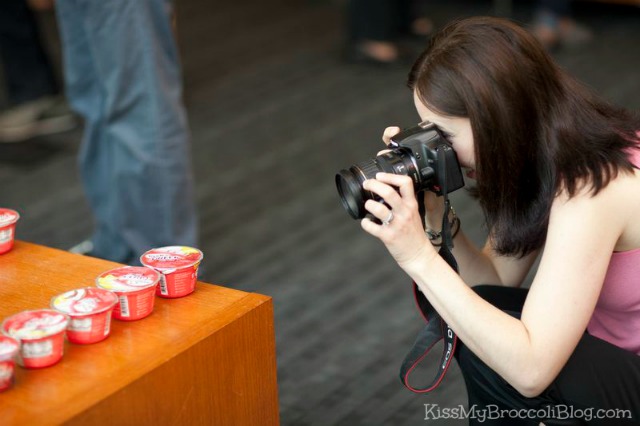 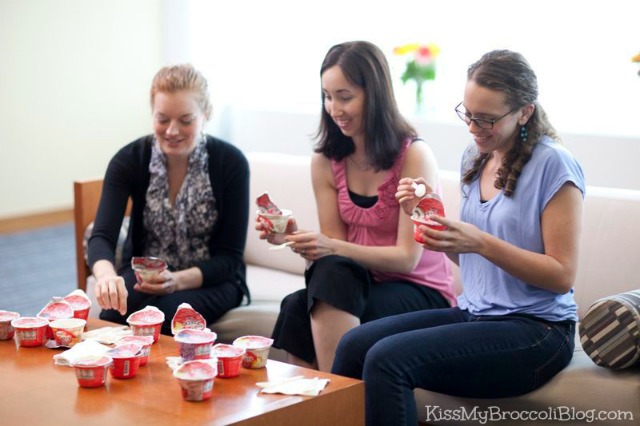 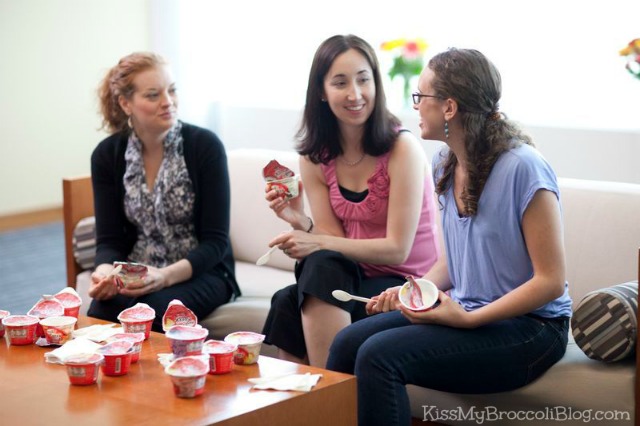 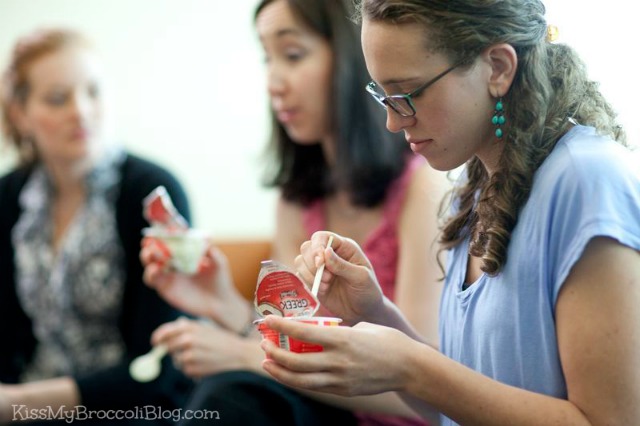 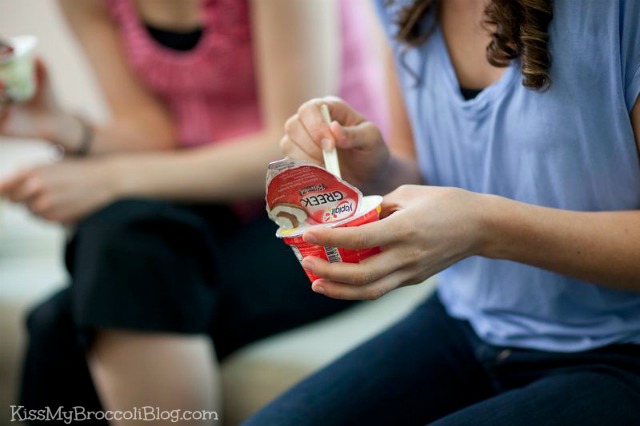 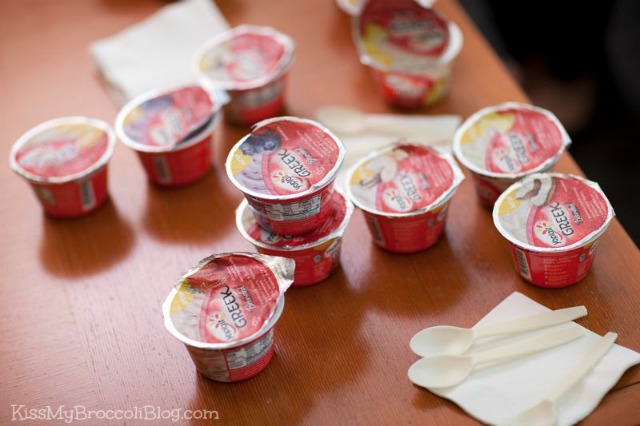 I don’t normally buy flavored yogurt…unless we’re talking CRACK…since it tends to be too sweet for me. Knowing that and having tasted some of Yoplait’s Greek 100 in the past, I’ll be honest, my expectations weren’t that high. I did find the berry-flavored ones to be a bit sweeter than the rest, but I was pleasantly surprised to see that I could handle the others. I was also SHOCKED to see that they fit the bill in the thickness category…because let’s face it,

If it ain’t THICK, it ain’t GREEK!

We sampled all six flavors along with the plain base (which I’m hoping they push onto the shelves because it was great!) and then went along playing and mixing flavors in true foodie fashion…oh, and for the record,

After we just about OD’d on thick and creamy yogurt deliciousness, we had the chance to look around the main floor… 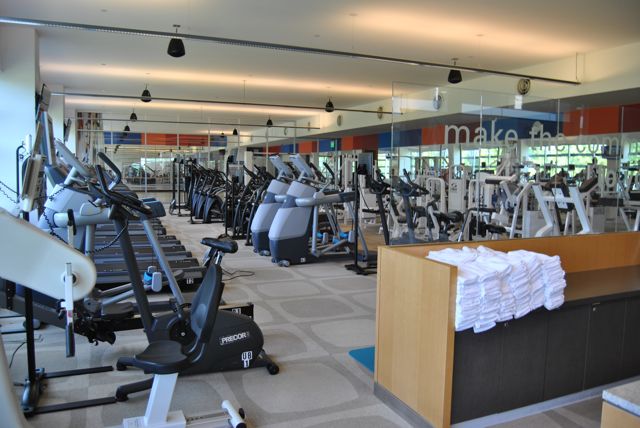 We checked out the gym… 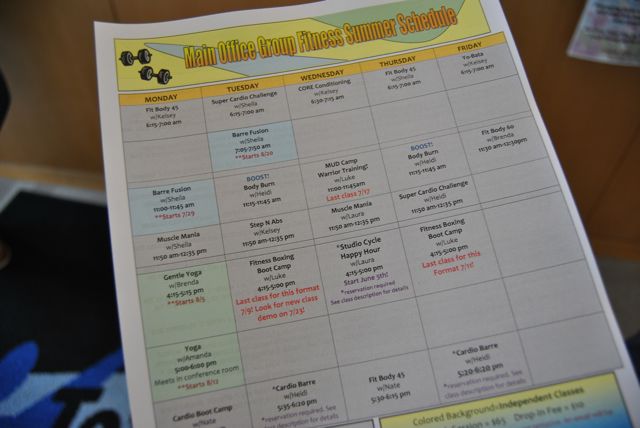 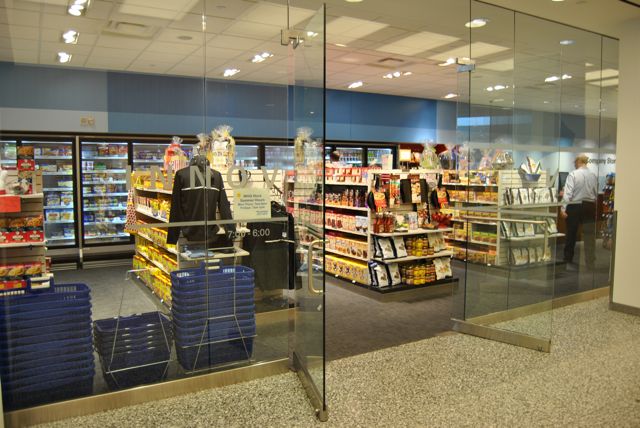 We snuck a peek at the General Mills Store (think convenience store filled to the brim with cereal, cookies, baking mixes, cereal, chips, snack bars, cereal, soups, yogurt, and did I mention CEREAL?!

Um, basically, I could friggin’ LIVE in there!) 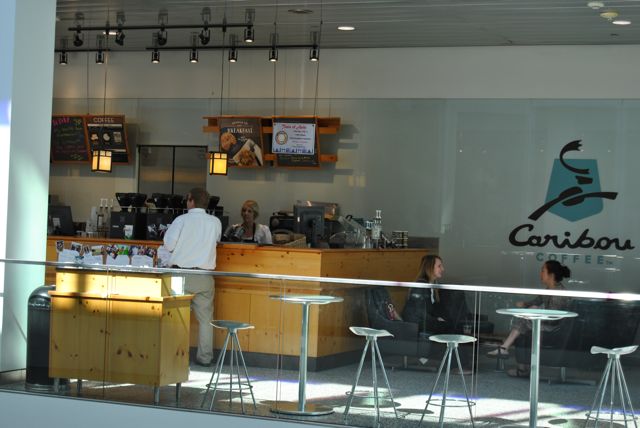 We walked past what we later found out to be the largest Caribou Coffee in the NATION! 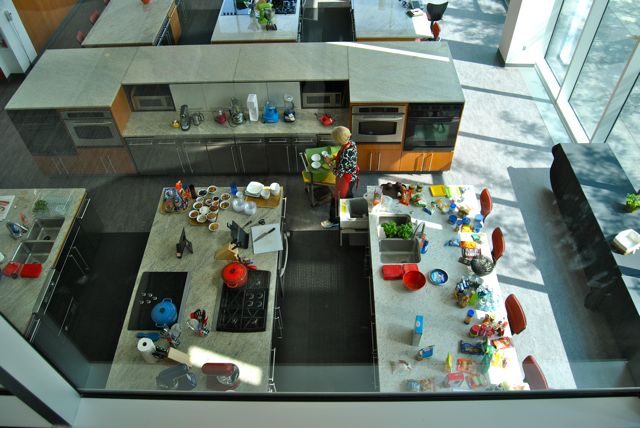 And then I LITERALLY jumped a foot off the floor when we spotted
THE Betty Crocker Kitchen!

Once back with the group, it was time for MORE FOOD delivered by The French Bakery! 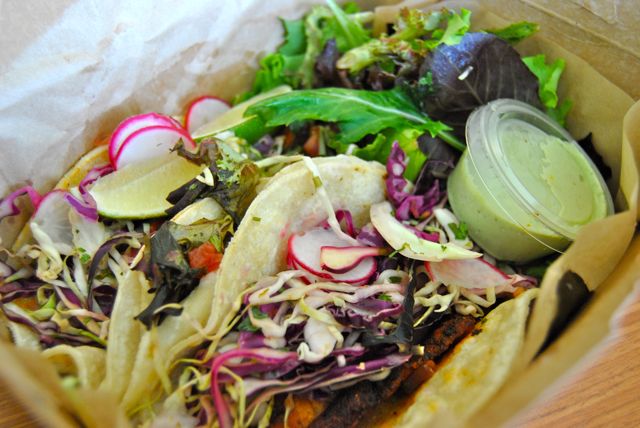 I chose the fish tacos (of course), but once I sat down, I decided to hold on to it for later when I realized I was still pretty full from sampling…or at least that’s what I THOUGHT my reason was!

Lo and behold the fro-yo Gods were signaling me because shortly after lunch, Katie, Brianne, and I were ushered over to the Betty Crocker Kitchen to meet the staff who just happened to have THIS waiting for us… 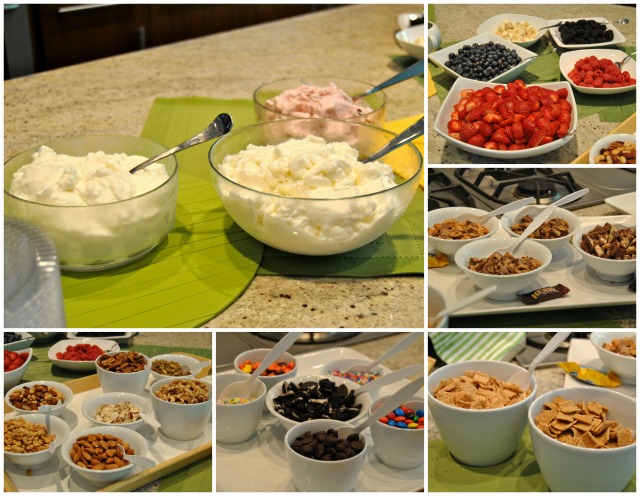 What can I say, homemade fro-yo and UNLIMITED toppings brings out the gangsta in me! And can we take a minute to appreciate the fact that they put out the Golden Grahams and Cinnamon Toast Crunch JUST for this cereal killer right hurrrr?!?! 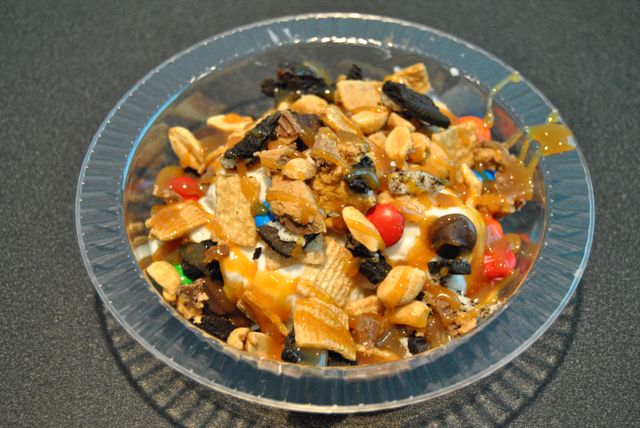 After we got to know the ladies of the kitchen over our bowls of fro-yizzle, we donned the signature red aprons and set out to channel Betty herself…but since I’m OBVIOUSLY a bit delirious and in need of sleep at the moment, that story will just have to wait until tomorrow…