I know today is supposed to be the day where we beat the “Mondays” and start the week off with vim and vigor…pat ourselves on the back for a week well done…point out all the marvelous things from our weekend, but to be honest, I warned you I was going to be a bit unpredictable.

I’m not really sure how this post is going to turn out, but I really just feel like I need to get some stuff off my chest so… hold my hand?

One of the reasons I took a break from blogging was that I was just feeling so overwhelmed and really just out of control. I hate to admit it, but I got sucked into the comparison trap a bit. After Blend, everyone was getting “back on track”…there were plenty of green smoothies, hearty bowls of oats, and crisp clean salads popping up all over blogworld.

And there I was…

Sitting in the floor of my pantry polishing off a box of chocolate Cheerios.

No milk. No bowl. Just shame.

For an entire week, it felt like a struggle just to make it to the end of each day. I wasn’t sleeping, I wasn’t exercising, I wasn’t smiling, and I most certainly wasn’t eating anything green…so I sure as HELL wasn’t going to blog, but after an entire week of binge eating, a couple of (or several) breakdowns, and one very, VERY difficult conversation with Jamie, things finally started to click.

Since then, I’ve actually gotten to the point where I can see the WHY behind a lot of my thoughts and actions. Here are a few “moments of enlightenment” I’ve experienced over the last week and a half:

1. My mood/self-esteem, how my knee feels, my digestive system, and pretty much my entire outlook on life is absolutely 100% dependent on…the amount of sleep I get!

When I am sleep-deprived (which, since going back to work last month, has been more often than not), I almost always end up with a wonky tummy which almost always ensures that by the end of the day I’m going to be so pissed off at my tummy AND MYSELF that I’m going to drown my sorrows in a couple of tall ones. And when I say tall ones I mean beer. And when I say beer I mean cereal.

Because no matter what, once a…

Always a cereal killer. Hey, I’ve got the spoon to prove it! 😉

2. Try as I might (even though I devoted an ENTIRE FREAKIN’ POST to it), I still sometimes struggle with the “good” versus “bad” labels… 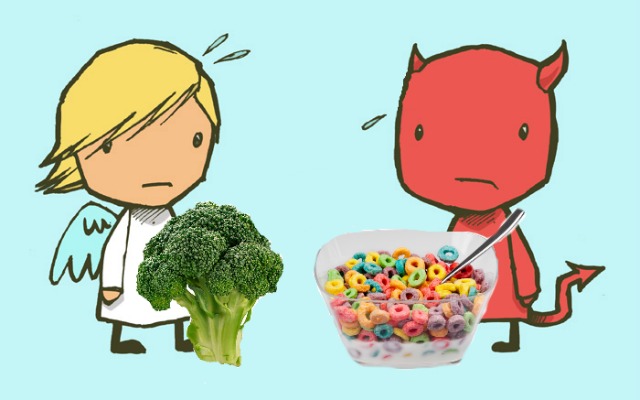 I know that eating a Poptart every now and then isn’t going to kill me but when I have one, I feel the need to eat twenty! I KNOW I feel my best when eating clean, minimally processed foods (that has basically been my diet about 80% of the time in the last few years), but since those “forbidden” foods are still on that pedestal I built, I feel almost deprived by telling myself not to have them.

3. I’ve been pulling away from the people a lot and have left myself feeling sad and lonely.

I haven’t felt “put together” in a long time now, but I only recently realized that I’ve been using things in my life as excuses to isolate myself so that no one sees the “abnormal” parts of me. I joke to keep people at a distance because if they get too close, they might see that the cracks beneath my surface need a bit more than a couple of strips of duct tape. I also joke because it makes things feel less serious even though they tend to cause me so much anxiety that I lose sleep at night WHATEVER!

So there’s?? where I stand right now…further proof that this whole Intuitive Eating thing is a lot harder than I thought it would be, but also a milestone in my journey because, even though part of me feels like I haven’t made much progress in the last month, the fact that I’m finally starting to see and feel things shows growth.

I know that the progress in this journey can’t be linear…but sometimes it’s so hard to see the bigger picture.

No questions today…
But I could use a few words of encouragement.

This entry was posted in Personal and tagged intuitive eating. Bookmark the permalink.