Thoughts on the F-Word

Today marks the halfway point in the IE Challenge.

My mind is reeling.

I’ve been trying for DAYS to get my thoughts together so they all make sense, but it’s not really working. I’ve written stuff out. I’ve crumbled stuff up. I’m not really sure what to do here. Up until last week, I felt like I was making HUGE strides in my journey with intuitive eating. Then I had a “slip.” I know I shouldn’t refer to it as a “slip” because that infers that I made a mistake…which I didn’t. It’s all part of the learning process.
And besides, there’s no room in life for guilt, RIGHT?

I’ve always been a perfectionist. I’ve always had the mindset that if I’m going to do something, I’m going to be damn good at it. That being said, I am also a quitter. I’m not ashamed to admit it…it’s true.

But I can’t quit this (much like lonesome cowboys can’t quit each other). This is so much more than just something new to “try on”. I know this is for me. I know that once I’m over the hard parts, my life will be better for having made this decision. I feel it.

Jamie told me the other day that I’m being too hard on myself. She said I need to learn to treat myself like a little girl. Take notice of things I’m not happy with in a non-judgmental manner, speak kindly to myself and move on.

That hit me hard.

I would never in a MILLION years use such hurtful words with a child as I have with myself. You wouldn’t berate a toddler for falling after just learning to walk would you?

So let me take you through the thought process of my last THING that happened…remember that fruity fro-yo from festerday (sorry, alliteration relapse)?

Yeah, well, I didn’t really want it. I was SO full after my meal, but I had been the one to suggest dessert after dinner. I didn’t want to look silly in front of my friends. Plus, I love fro-yo and I don’t get it as often as I would like, so I decided to just get a little bit. And I ate it all. It wasn’t even that good…tasted too sweet. Probably because I was so damn FULL!

I felt miserable, and for the rest of the night, I beat myself up over it.

Beat myself UP over a cup of FROZEN YOGURT!!

I was disappointed in myself. Disappointed that I didn’t just go with my gut (pun not intended, but still welcome) and say “no thank you”. Oh and did I mention that I forgot to take my Lactaid beforehand? Yeah, if I didn’t know any better, I’d say it was premeditated self-sabotage…like, “Oh yeah, I’ll show her!”

And for another level of crazy, my stomach is now talking to me! 😯

But you know what? Even IF your lactose-challenged/talking tummy swells up like a balloon and makes you appear six months pregnant, one night of overeating isn’t going to make you fat. Hell, TWO nights in a row won’t make you fat…because I’m not gonna lie, that wedding dinner? That was a full-fledged, night of overindulgence.

BUT you know what WHAT?

I was ok with that. Because I realized at THAT moment that I was overeating. I told myself that it was ok to eat past my full point, but I stayed in tune with my body and knew when to stop before I overdid it. Unfortunately, on Sunday night, I was too zeroed in on oversized sprinkles in the form of cereal to see that! 😉

And besides, I didn’t overeat ALL weekend which is something I  AM proud of myself for. In the past, I would have seen one instance of overeating as a chance to just…to just say…well…

And then would proceed to gorge myself all weekend, telling myself that come Monday morning, I would be “better”! But that’s not how it is now. I have STILL made progress in that aspect. I actually was VERY mindful for most of my meals and I came home with a LOT of leftovers that I’ve been enjoying all week! 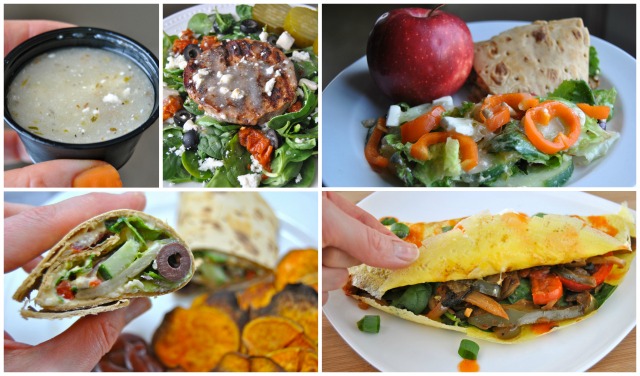 And that is the SAME wrap in TWO separate pictures…leftover leftovers!

I’ve actually surprised myself by not being able to finish most of the meals I’ve prepared over the last few days. So you see   HEATHER,
the body DOES know how to balance itself out!

And because I like to end my posts on a light-hearted note, tell me, what are your FIVE favorite F-words?

Fro-yo, Filament (you have to admit it’s FUN to say), Fluffaaaaaay, Fantastical,
and um…Fotography?! 😉

69 Responses to Thoughts on the F-Word