Posted on December 12, 2013 by kissmybroccoli

Thank you all so much for the well wishes yesterday!

I’m still taking it easy and shying away from overly spiced and elaborate foods, but I’m feeling much better this week. Actually, I think getting sick was just the reset that I needed…a blessing in disguise you might say. I know, sounds crazy, right? But the days in between Thanksgiving and “D-Day” were not all that pretty and honestly, I really needed that kick in the ass.

And so the story begins…

After the Thanksgiving festivities with my family last Friday, everyone broke off and went in their different directions. I was on call that night and the man-friend had been in Memphis visiting his family so I knew would have the weekend to myself. Besides wanting to put up my Christmas decorations (didn’t happen), I basically had a free weekend ahead of me, but instead of that weekend being a balance of productivity and relaxation, it was an absolute nightmare. 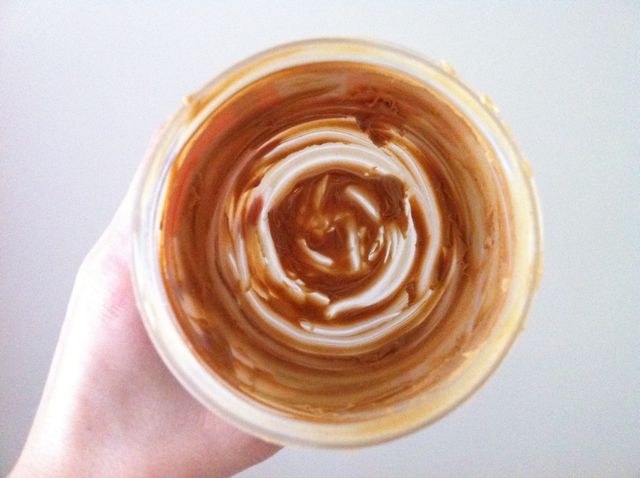 A simple smoothie in a near-empty peanut butter jar “rescued” from my parent’s house the day before landed me in a binge cycle from Saturday morning until Monday evening.

I had no idea where it came from. I felt overly full from the smoothie and the next thing I know, I’m eating every.thing.in.sight! I didn’t understand…especially after having done so well eating intuitively during the holiday, but I just couldn’t stop. And the more I ate, the more it became a punishment. I cried…a lot. Now, as I look back, I can actually see the reasons behind it all, but that’s a subject for a different day.

All this I’ve shared to paint a picture for the mindset I was in early last week. The feeling of inadequateness and failure mixed with the physical side effects of bingeing.

On Monday, a new week of challenges began.

The first week of The Good Life Challenge was focussed on food. It concentrated on honoring hunger, satiety, and savoring meals…all things I felt were “old news” but week two was all about the body and it seriously couldn’t have come at a worse time. The challenge for Monday was to dance to two favorite songs, but being depressed, miserable, and bloated, dancing was the  LAST thing on my mind. Then came Tuesday’s challenge…

“Write down three things you love about a body part that you are not particularly fond of.”

Please, someone give me a brick wall that I can bang my head against! I can go on and on all day about the parts of myself that I like, but THAT one? I was supposed to list THREE things?! Hell, I couldn’t even come up with ONE! After thinking about it all day long, this was my entry on the Facebook wall… 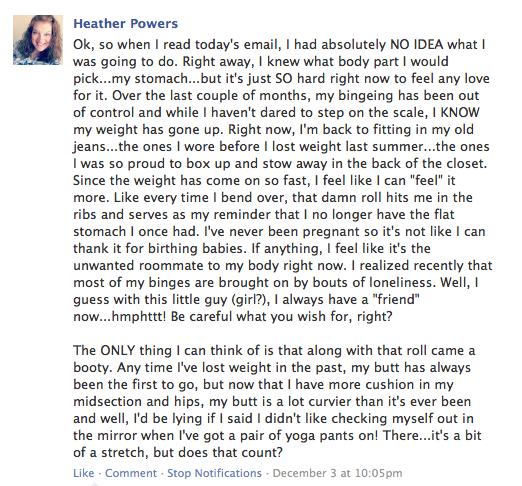 And the next day I woke up with a demon inside me. Call it what you will, but part of me feels like it’s likened to karma. I was being so mean to myself, so my SELF got me back! And I’ll tell you right now, I LEARNED my lesson! After 36 hours of barely being able to move any part of my body and not even being able to THINK about food without wanting to vomit, I now have a renewed appreciation for my body, what I do with it, and what I put in it.

Since I started eating normally again on Thursday, I feel like not only have my taste buds been reset, but so has my mind. A few situations that could bring on a binge in the past have come this week, and I haven’t even thought about it. My hunger and satiety cues are right where they should be and even though my veggie consumption has fallen off a bit and I had popcorn for dinner the other night, I know that I’m finding balance elsewhere in my diet.

Perhaps I was meant to get sick…

I know it sounds a bit dramatic, but over the last few months, I’ve gone from bingeing to “normal” and back to bingeing on what seems like a pretty consistent basis. I think I really needed something to shake the shit out of me and help me see how important my body is and that I should show it a hell of a lot more respect than I had been.

A very similar thing happened in college…I was getting lost in my party-girl ways and my grades were suffering. Then I got the worst case of strep throat I’ve ever had in my life…they actually had to give me a steroid shot just so I could swallow! And then I had to spend the weekend at my parent’s house recuperating. I jokingly refer to it as my stent in rehab because after I came back, I realized what I had been doing and that the direction I was heading in was not what I wanted for myself. From that point on, I was nose to the books!

So this is where I stand right now in my journey…with a renewed sense of self and a change in perspective that has left me with appreciation AND respect for my body.

Now I’ll turn things over to you, what are THREE things you love about a body part you’re not particularly fond of?