Posted on February 9, 2014 by kissmybroccoli

So I got this GREAT idea for a pancake recipe!

I was treadmilling at the gym Friday morning, AFTER a 5:30am Body Pump class…obviously holding true to it’s name ’cause I was feeling the PUMP…and the thought just POPPED into my mind! It was good…oh yeah, it was VERY good! I verbally (ok, literally) patted myself on the back, stopped my hamster wheel, and practically (ok, you got me…literally) skipped my way to the car!

On the way home, the pancake vision was getting brighter. I saw sprinkles…PINK sprinkles. I saw a clever Valentines Day title blaaaaaay-zing at the top of my post in all it’s PicMonkey glory. I saw people bowing at my feet and throwing me roses! 😆

I prepared myself. It’s been, what two months since I last made pancakes? I wanted, no I NEEDED it to be good. I had a snack. Then I threw on my headphones, pulled out my spatula (slash microphone) and set to work.

I mixed, I measured, I stirred, I flipped and… 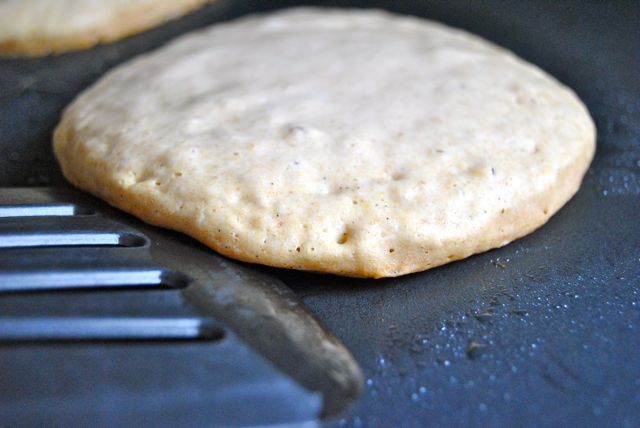 The beauty of pancake procreation was witnessed! 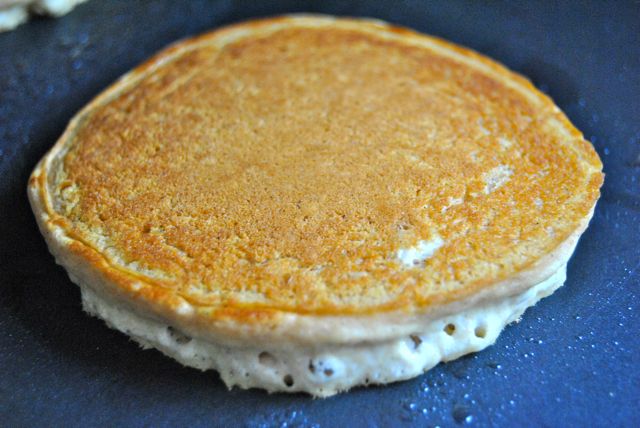 I readied the props…proud of myself for the impulse buy I made at TJ Maxx a few days prior. I sorted out pink and white dots from a bottle of birthday sprinkles…because I will never learn to have enough forethought to plan ahead for food holidays. I even had the brilliant idea to craft some banana art!

Then I proceeded to take one hundred and thirty SEVEN pictures. Finally, an hour after this entire spoon to batter process began, it was time to taste my masterpiece. It was time to sink my teeth into some soft and fluffy… 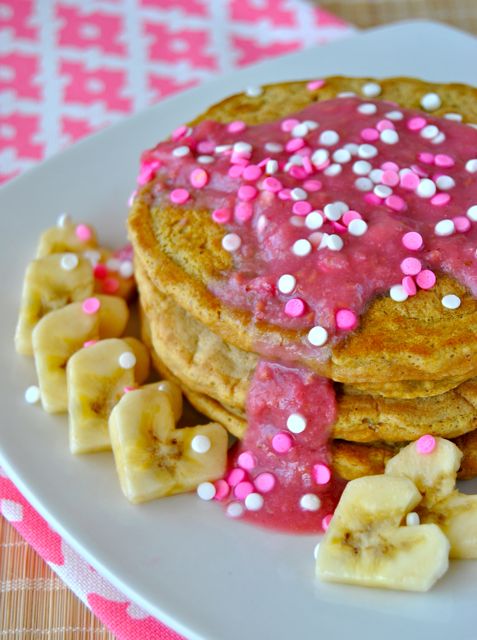 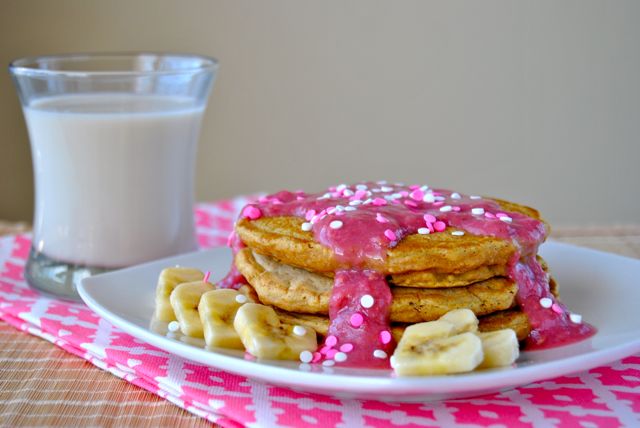 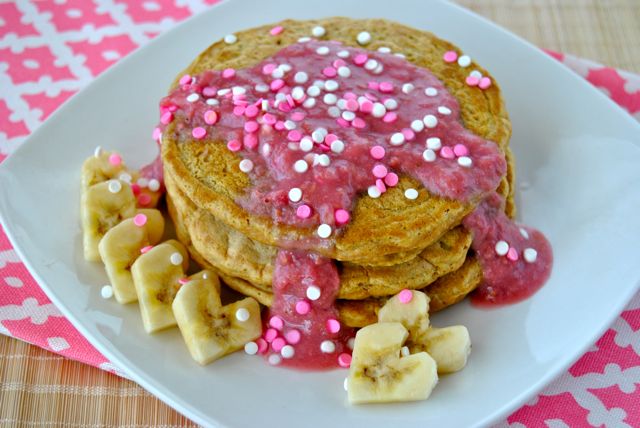 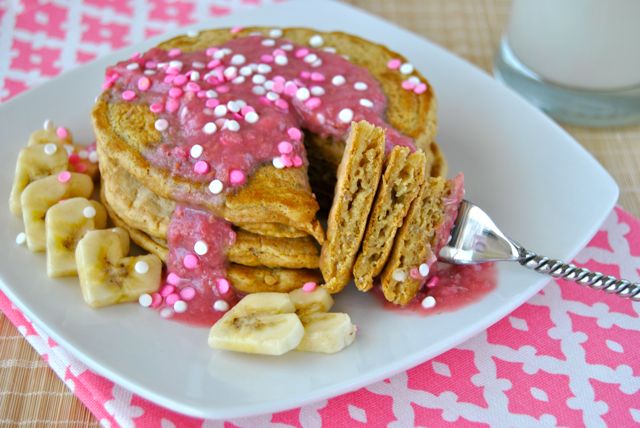 Of course I ate them anyway (because at this point, I was starving), but I didn’t loose hope…because tomorrow was another day! So yesterday morning, I tweaked a few things and thought, what the hell…let’s have a little more fun! There was no way in HELL I was sorting out more sprinkles, but I now think I deserve a degree in banana-crafts. This time I took one hundred and forty TWO pictures…five more, ya know, just in case! 😉 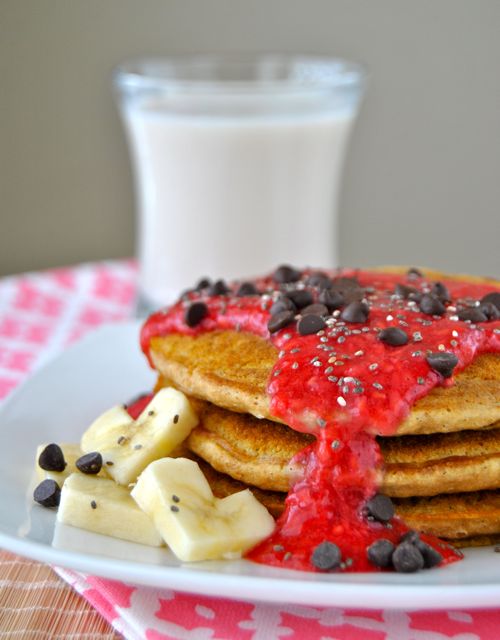 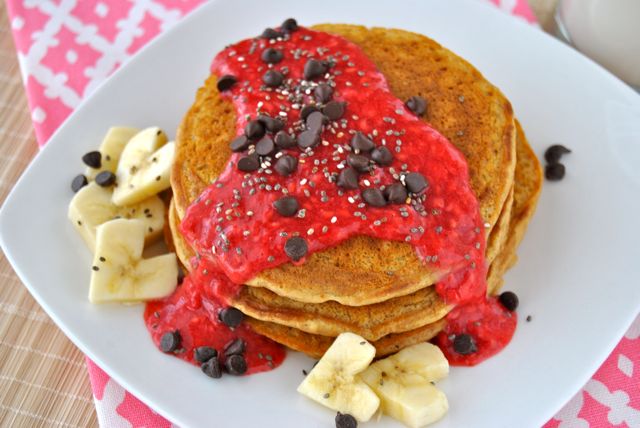 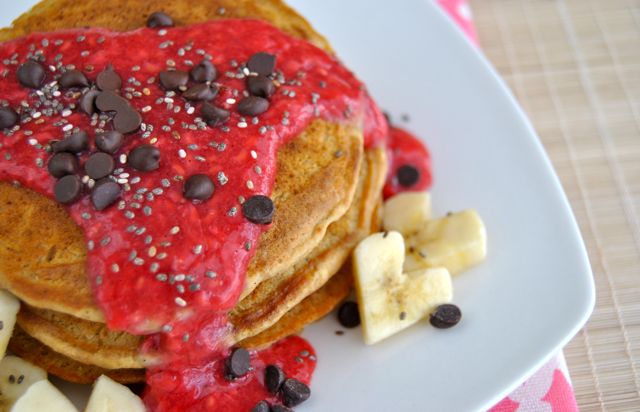 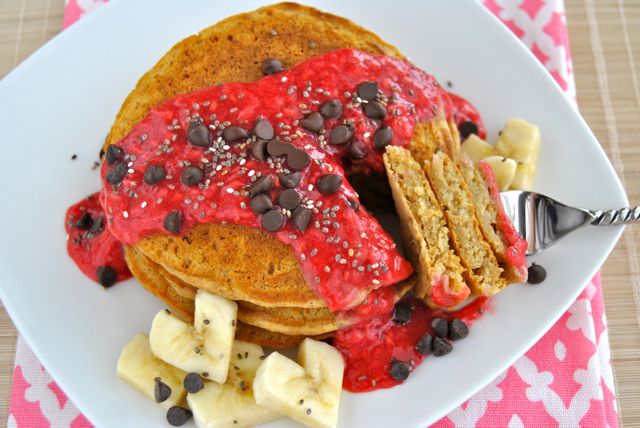 Of course I ate them anyway (because at this point, I was starving), but I didn’t lose hope…because I still had a full day ahead of me and with a snowstorm brewing outside, I didn’t have anywhere else to go. Plus…

I was determined to make some damn VEGAN pancakes!

So a few hours later, I set to it. And after FOUR batches, I had FLAT, still FLAT, too SALTY, and wait, is that GREEN?! I was so disappointed. I got angry. I left the room. I came back. I left the room again. Then I cried. 😥

Last night, I gave it ONE LAST try, convinced that my lucky number seven would serve me well. So there I was, at 11pm, flipping ‘cakes. I tried another direction from the other batches. The batter turned out perfect. After flipping, I stepped back and marveled at the golden brown color. Once they were FINALLY done, I plated one, took a bite, and…

I’m done. That’s it. From this day, February 10, 2014, and on, I solemnly swear to never attempt another vegan pancake recipe! I’m sorry, I do like to try to accommodate all my readers out there but it just doesn’t seem like it’s worth the effort (slash waste of ingredients) when I myself am not vegan…and frankly, I’m done crying over
shitty pancakes!

So I have no VEGAN pancakes for you to share with your honey this Valentines Day (sorry, Davida, I tried), but hey, THESE should keep you busy for a while! 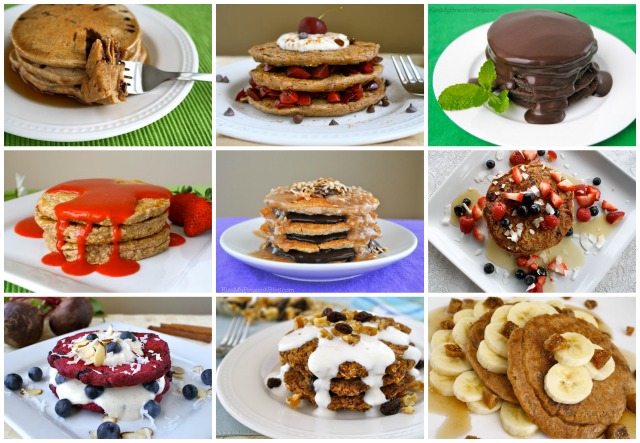 Now if you’ll excuse me, I’m gonna go fix a plate of EGGS and CHEESE! 😛

What are YOU having for breakfast today?

Describe your last kitchen fail…please, save my dignity!

44 Responses to The Vegan Pancake Vow